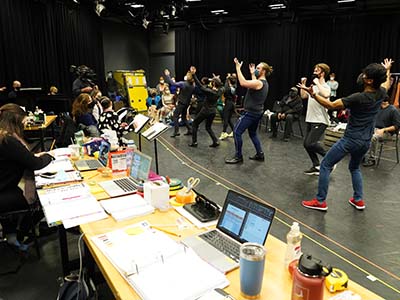 A Rare Opportunity: SMTD Musical Theatre Students Undertake Extensive Preparation for Roles in UMS’s Production of Fiddler on the Roof

Musical theatre students in the School of Music, Theatre & Dance (SMTD) have countless opportunities to learn from world-class scholars and practitioners: in courses taught by faculty, in master classes conducted by industry professionals, in visits from alumni working on Broadway.

An upcoming production offers a group of musical theatre students an entirely different educational opportunity: the chance to perform alongside Broadway actors, in a production led by a professional creative team – including Broadway director Sarna Lapine and music director Andy Einhorn – and accompanied by major orchestras. 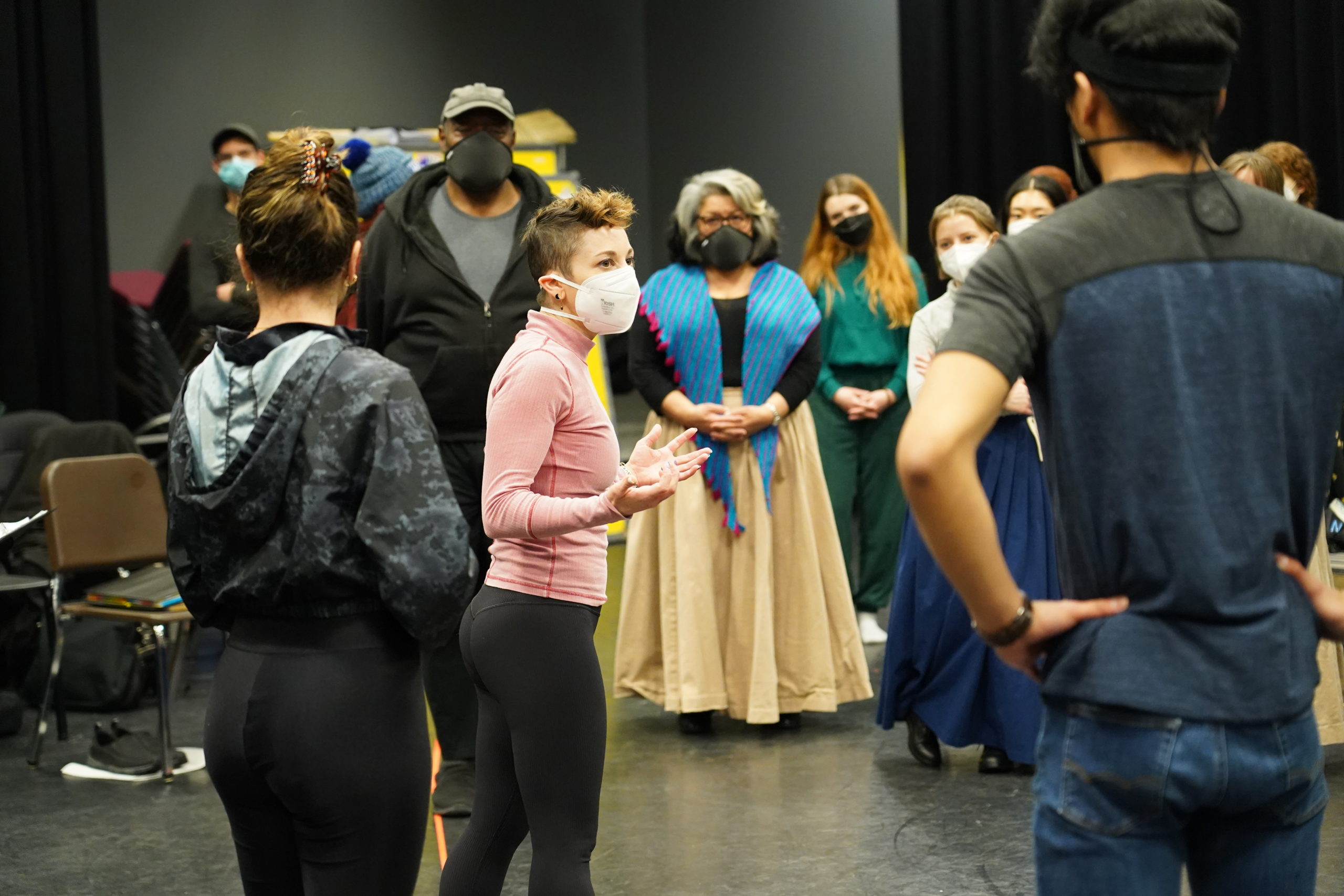 The beloved stage musical and film – based on the Yiddish-language stories of Sholem Aleichem – explores the tension between tradition and evolving norms in Anatevka, a poor Jewish shtetl (village), in early 20th-century Russia. Tevye the dairyman extols the traditions that govern Anatevka, dreams of a more comfortable existence, and seeks to arrange favorable marriages for his daughters. His daughters, on the other hand, long to depart from tradition, and the shtetl faces imminent threats to its existence from pogroms, the deadly anti-Semitic massacres that displaced scores of Jewish communities in Czarist Russia. 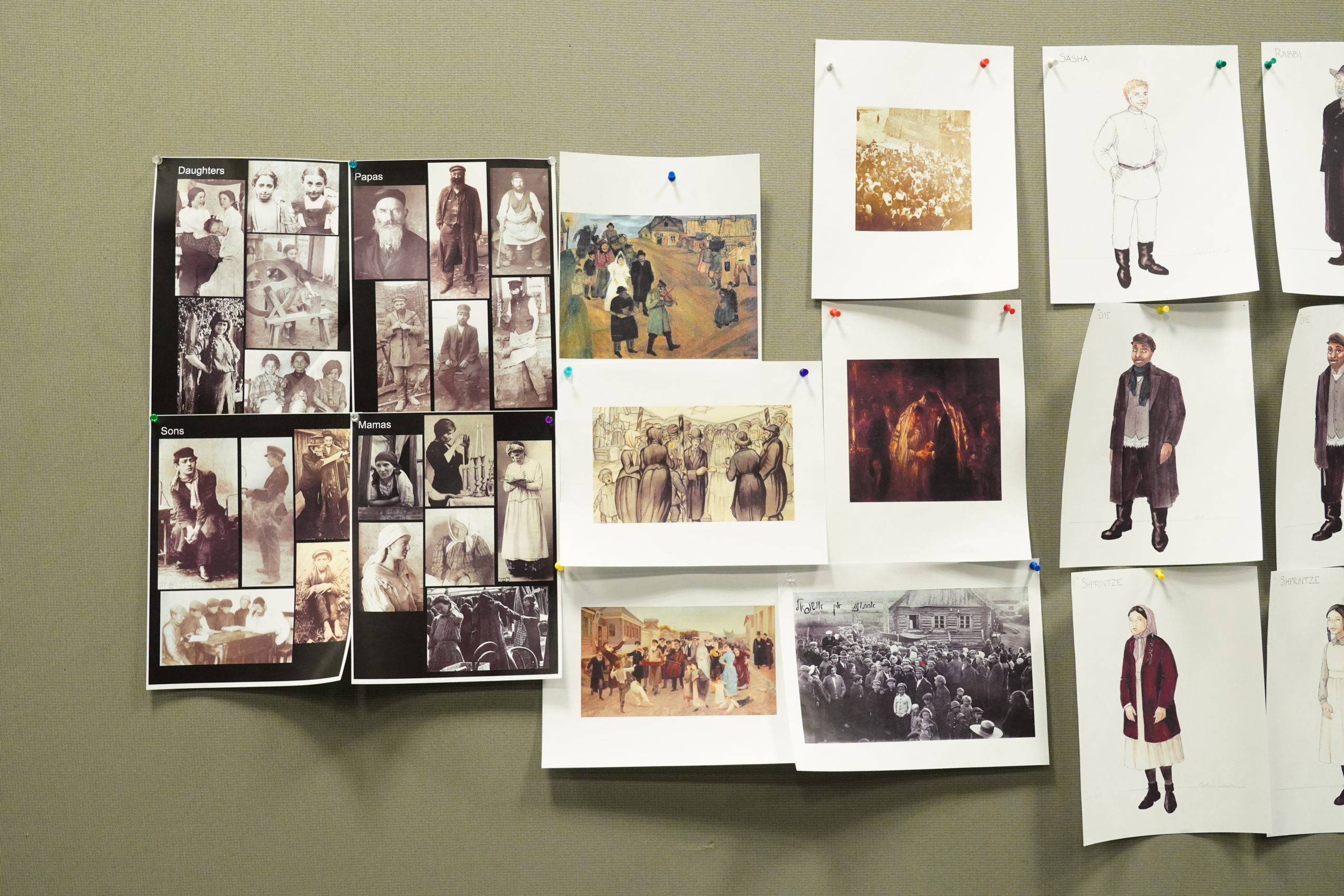 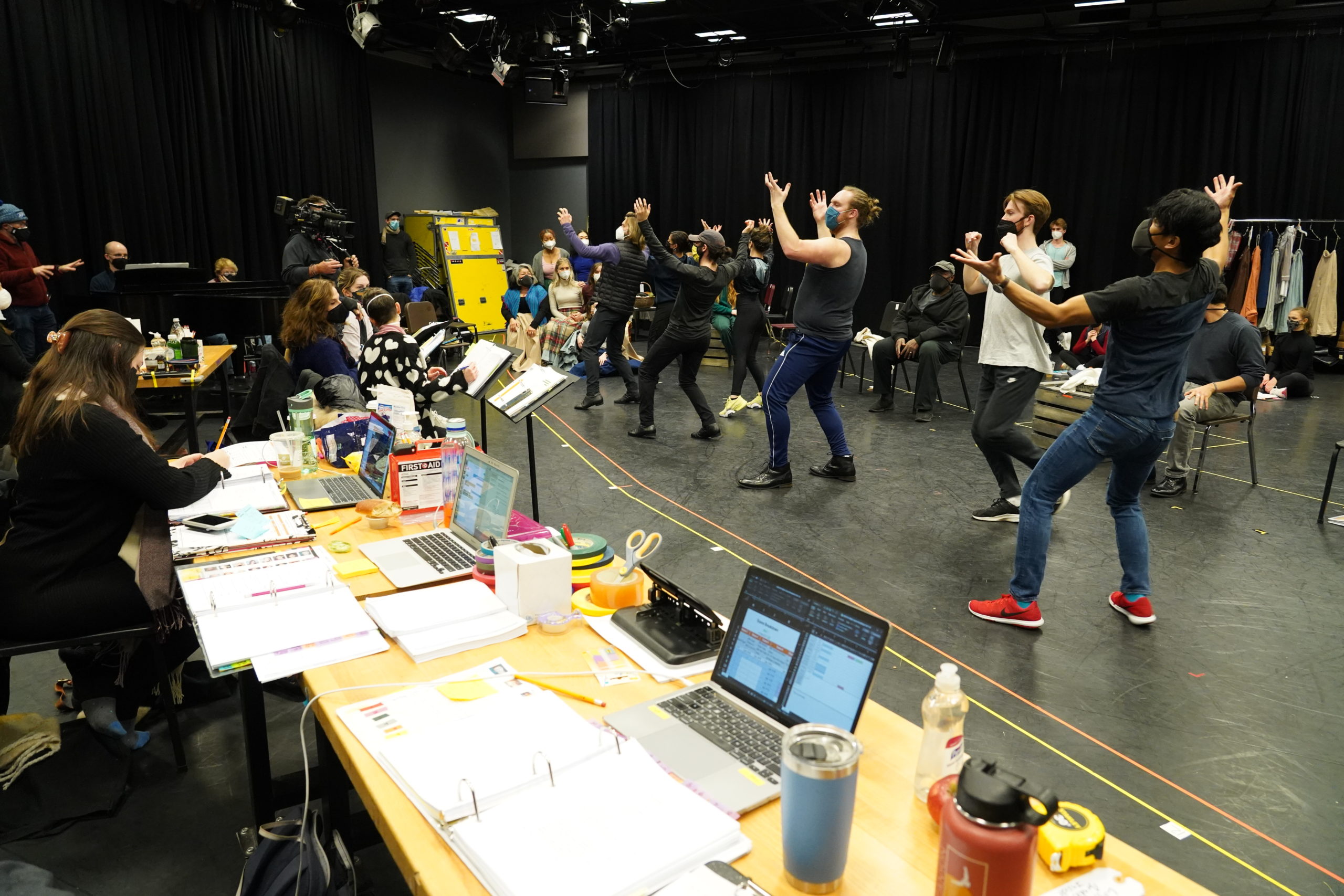 A rehearsal for Fiddler on the Roof

For Michael McElroy, chair of the Department of Musical Theatre and Arthur E. and Martha S. Hearron Endowed Professor of Musical Theatre, examining Fiddler’s context was a vital component of the experience for the students in the production. Keenly aware of students’ concerns about telling the stories of communities they aren’t a part of, McElroy wanted to take the steps necessary to help his students feel more comfortable in their roles. It’s a question, he noted, of “how we as artists step into other spaces that don’t necessarily represent our own lived experience.” He acknowledged that all artists do that, but, he asked, “if we’re saying yes, that’s what we’re going to do as a community, then what is our responsibility?”

The answer, McElroy determined, was to learn and understand – about Jewish traditions, about Yiddish language and culture, and about the lives of Jews in Eastern European shtetls. Before the roles in Fiddler had even been cast, he gathered all of the musical theatre students to meet with Rabbi Lisa Stella, director of religious life and education at U-M Hillel, Rabbi Josh Whinston of Congregation Beth Emeth in Ann Arbor, and Christi-Anne Castro, interim director of diversity, equity, and inclusion for SMTD. “I was really honored to be asked to talk to them,” said Stella, “and I think it showed sensitivity on the part of everyone involved.” McElroy began the process by asking whether the Jewish students in the department and the rabbis felt it was appropriate for, as McElroy stated, “a diverse group of artists to tell a story that is steeped in Jewish culture and tradition, like Fiddler on the Roof.” The answer was a resounding yes. 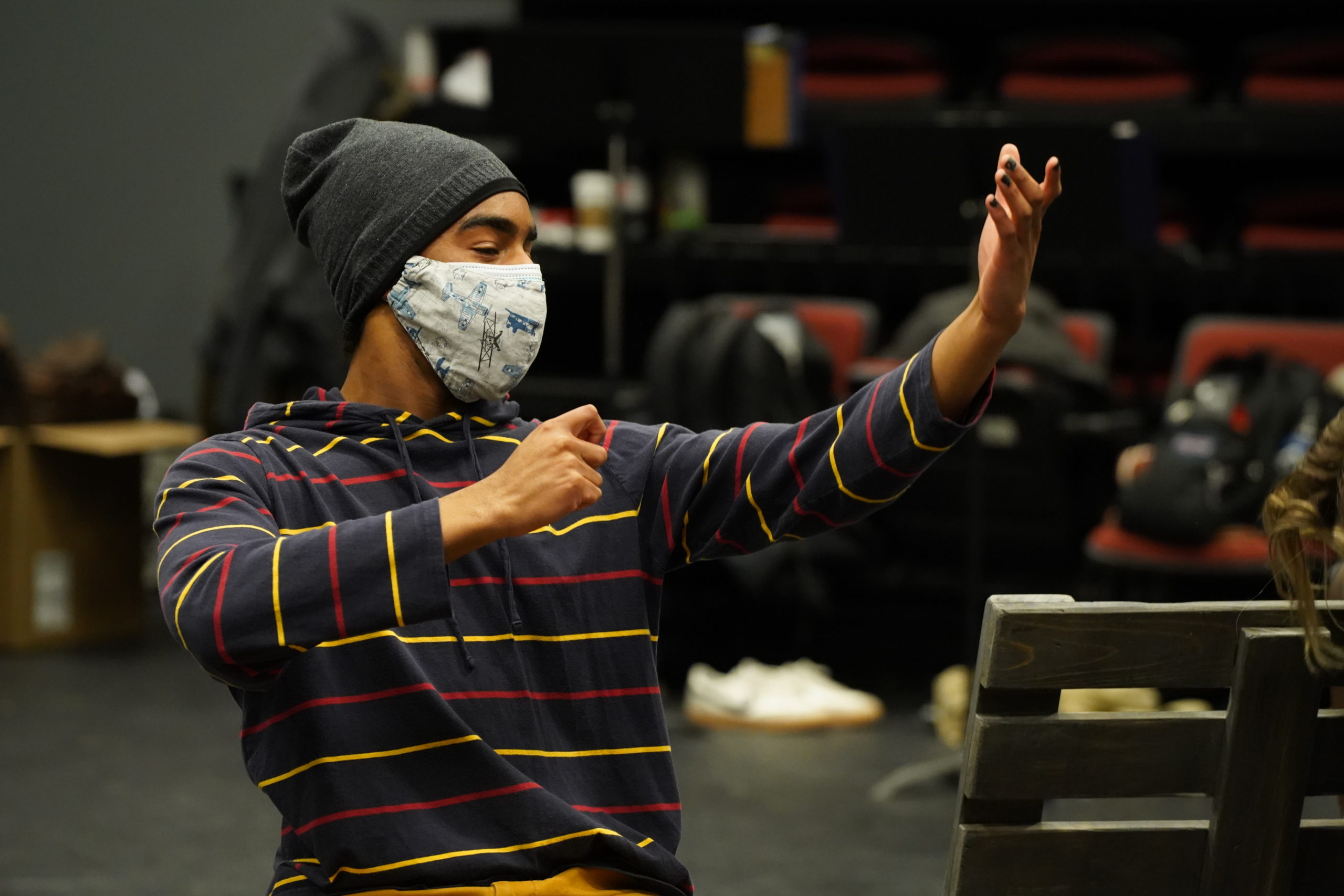 Owen Scales (’24) stepping in as the Fiddler during an early rehearsal. The role will be played by violinist Chris Cardona in Hill Auditorium.

Once the roles were cast, McElroy scheduled for the students a series of sessions with U-M professors and other educators, inviting them to meet with the students and address a wide range of topics. One of the guests was Mira Sussman, a Jewish educator and the resettlement resource development manager for Jewish Family Services of Washtenaw County. Along with Stella, Sussman spoke with the students about Jewish identity and history, explaining that “Judaism is not just an ethnicity or a religion, but it is also a way of life and a culture.” And while there are abundant examples of persecution throughout Jewish history, Sussman emphasized the joyfulness of her Jewish identity, noting “that trauma and discrimination is not the totality of our lived experience.” The session concluded with the teaching of the hora, the traditional circle dance that is a feature of many Jewish weddings and bar and bat mitzvah celebrations. 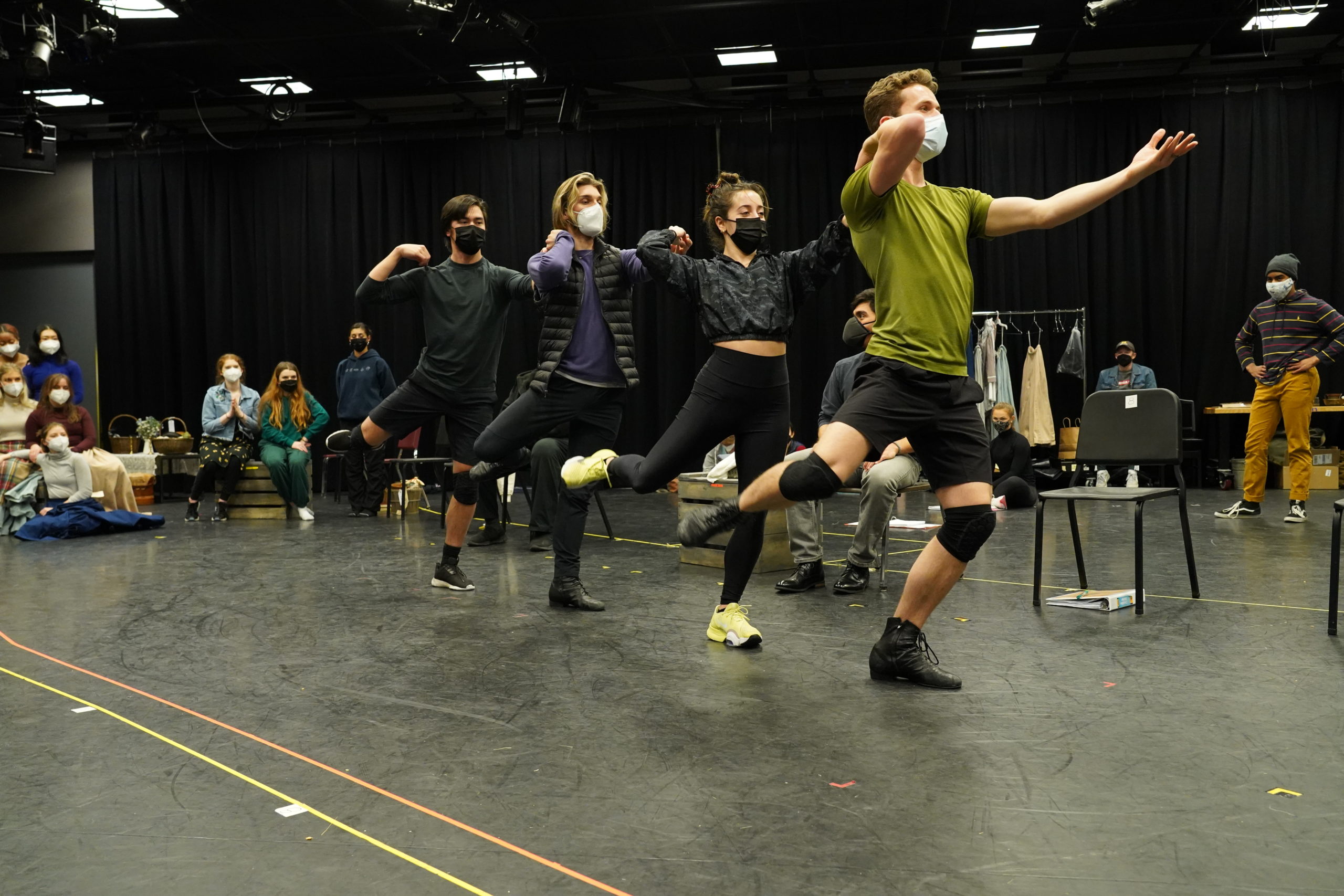 In a Zoom call with the cast, Julian Levinson, professor of English language and literature and Samuel Shetzer Endowed Professor of American Jewish Studies, explored the difference between Yiddish and Hebrew pronunciations. He gave the example of the English word Sabbath, which in Hebrew is Shabbat, and in Yiddish is Shabbos, explaining that “the different ways of pronouncing a word carry a whole set of cultural meanings.” Levinson told the students that the era depicted in Fiddler was a time of significant transition in Eastern Europe; many people were embracing revolutionary ideologies, he noted, and “rejecting tradition and rejecting religion and rejecting hierarchies of all kinds.” At the same time, Levinson asked the students to think about the fact that Fiddler reflects not just the era depicted in the musical, but the era in which it was written. He encouraged them to consider the musical, written in the early 1960s, as “an expression of postwar American Jewish culture.” Levinson pointed out that the themes explored in Fiddler – “conflicts between tradition and modernity, conflicts about gender, about the role of individual decision, love, [and] yearning in relation to the needs of the community” – resonate with people of many cultures worldwide. 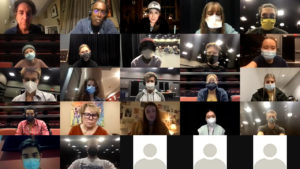 In a Zoom call with Levinson (top left), musical theatre faculty and students learn about the period in which Fiddler takes place as well as the period when it was written.

In another session, Stella gathered with the students to discuss Shabbat, sharing relevant passages from the Torah. “I wanted to ground them a little bit in the context of what the Jewish Sabbath is,” she noted, “and how significant it is in the framework of Jewish life.” Stella also gave the students a sense of how Eastern European Jews in the time of Fiddler would have celebrated Shabbat. And finally, she shared with them her own Shabbat traditions, setting up a table with a tablecloth, her grandmother’s candlesticks, and a kiddush cup, the special receptacle for the wine that accompanies the blessing for Shabbat. 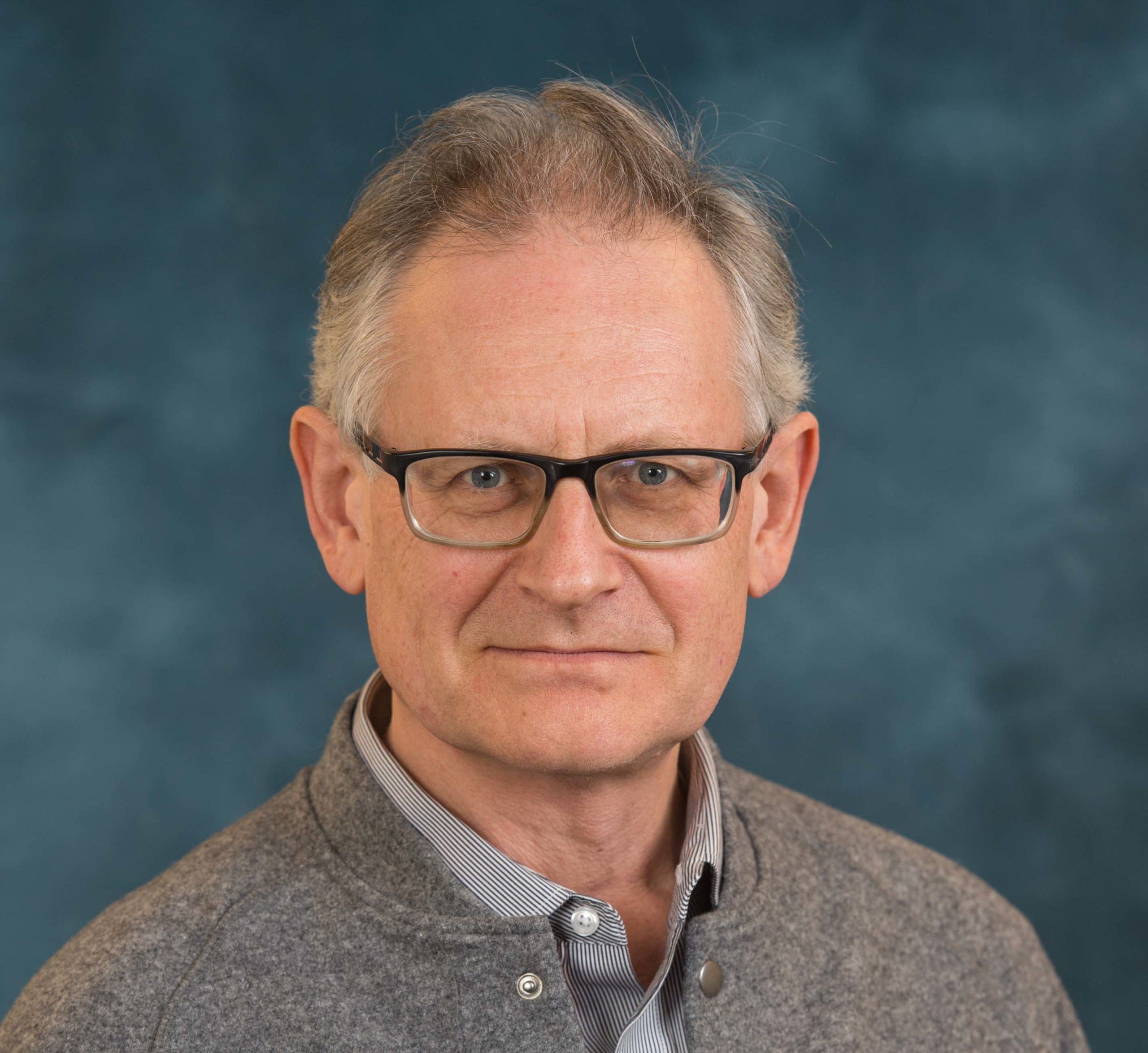 Mikhail Krutikov, chair of the Department of Slavic Languages and Literatures and Preston R. Tisch Professor of Judaic Studies, met with the students via Zoom and painted a picture of life in the shtetl, sharing images, describing the marketplace, and explaining that Jews and Christians coexisted in these villages and surrounding areas. Reflecting on the value of these sessions with students, Krutikov noted that “understanding the historical context adds depth and complexity to the performance and helps actors create more nuanced and multilayered characters.”

Acknowledging that the process involved in preparing for this production of Fiddler was not without its challenges, McElroy expressed his certainty that such work is essential. “How do we earn that right, to step into an experience that is not our own? By doing the work and bringing your empathy, bringing your humanity, and honoring [that story] through telling it in the fullest possible way.”

Fiddler on the Roof will be performed in Ann Arbor’s Hill Auditorium Saturday-Sunday, February 19-20 with the Grand Rapids Symphony. Tickets & Info

The cast will then travel to Philadelphia for three performances with The Philadelphia Orchestra at the Kimmel Center Thursday-Sunday, March 3-6. Tickets & Info 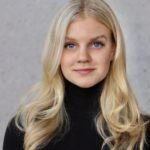 Musical theatre senior Ella Olesen, who is performing in the role of Tzeitel, Tevye’s oldest daughter, offers her perspective on the experience and what it contributed to her performance.

← Winners of the 2022 Friends of Opera Competition Student Perspective: Ella Olesen on <em>Fiddler on the Roof</em> →