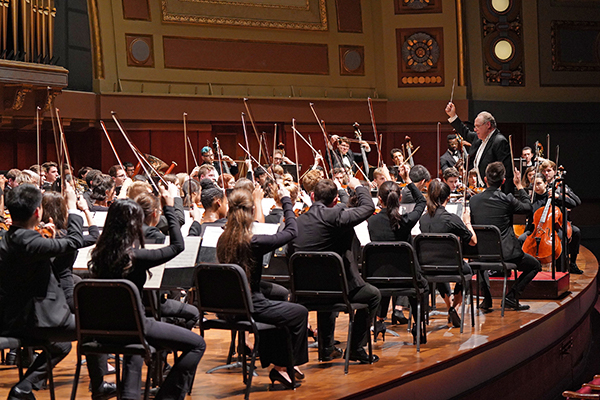 The University of Michigan Symphony Orchestra has released a new album today via online streaming and CD. The collection of music, titled Kairos, includes three new recordings and a re-release. All performances were conducted by GRAMMY nominee Kenneth Kiesler, Director of Orchestras and Professor of Conducting at the University of Michigan School of Music Theatre & Dance.

Kairos is the latest in a series of award-winning recordings from the UMSO. Most recently, the orchestra received a GRAMMY nomination for 2014’s Mihaud: L’Orestie d’Eschyle, which was heralded by The Examiner as “one of the most memorable recordings of 2014,” and by Fanfare as “one of the outstanding operatic recordings of our time.” Brian Wigman of Classical Net also said of the work, “Kenneth Kiesler…is a fine conductor, marshalling his (mostly) young charges to give 110%.” In 2006, the UMSO’s recording of William Bolcom’s Songs of Innocence and of Experience won four GRAMMY awards.

“These four composers speak with individual voices, yet share a huge capacity to move, inspire, and delight us with their music,” said Kiesler. “Knowing and working so closely with them, and with flute soloist Amy Porter, has been such a joy for me and the musicians of the UMSO. I’m thrilled about the release of this recording, and to know that the world will now have the opportunity to enjoy these four wonderful pieces.”

Rain On It, composed by Kristin Kuster, was recorded in 2012 and captures the mood of “freezing an instant of imagined rain.” Of the piece, Kuster said, “I stretch and dwell within this moment to capture a mood, which celebrates the relentless intensity of time, our enraptured emotionality that is over in the blink of an eye, our strained and fumbling grip on time, churning, incessant, and ceaseless. After the rain, there is newness, and joy.”

Interior Castle (of St. Theresa), composed by Stephen Rush, was recorded in 2015. The piece is inspired by a guide for spiritual development through service and prayer, written by Spanish Carmelite nun and famed mystic, Theresa of Avila. Of the recording, Rush said, “My exploration of Theresa of Avila and her weird book “The Interior Castle” is now made into sound. I hope it inspires people, they have fun listening, and they are challenged by her extremely out-of-the-box theology. I am thrilled beyond words at the care and abilities of Ken Kiesler and the University of Michigan Symphony Orchestra, and I’m also deeply honored to be included alongside my highly respected colleagues [on this album].”

Composer Evan Chambers’s work Kairos, which shares its name with the album, was recorded in 2010 in honor of conductor, educator, and violinist, Elizabeth Green. Kairos is derived from the ancient Greek word for time and refers to “a qualitative sense of ripeness, a liminal period of opportunity during which transformation is possible.” Of the piece, Chambers said, “Since it was commissioned by the Michigan School Band and Orchestra Association, as I contemplated writing a piece for young musicians, I kept returning to a sense of the urgent need for transformation if our world is going to be any kind of a hospitable place for future generations to live. And, of course, the dimensions of that moral and ethical transformation are in the hands of our young people.”

Lyric Concerto, composed by Pulitzer Prize and GRAMMY award-winner William Bolcom was originally commissioned in 1993 by the Koussevitzky Music Foundation and the Barlow Endowment for Music Composition for flutist James Galway and the Saint Louis Symphony. It was performed and recorded by the University of Michigan Symphony Orchestra with Amy Porter in 2002. Bolcom’s music “reveals the composer’s characteristic wit and affection for popular music” (John Henken, Los Angeles Philharmonic).

Listen to the album Kairos and other works by the University of Michigan Symphony Orchestra on Spotify.