Home » Performance » Musical Theatre » “The Rhythm of the Duke”: The Legacy, History, and Celebration of Sophisticated Ladies 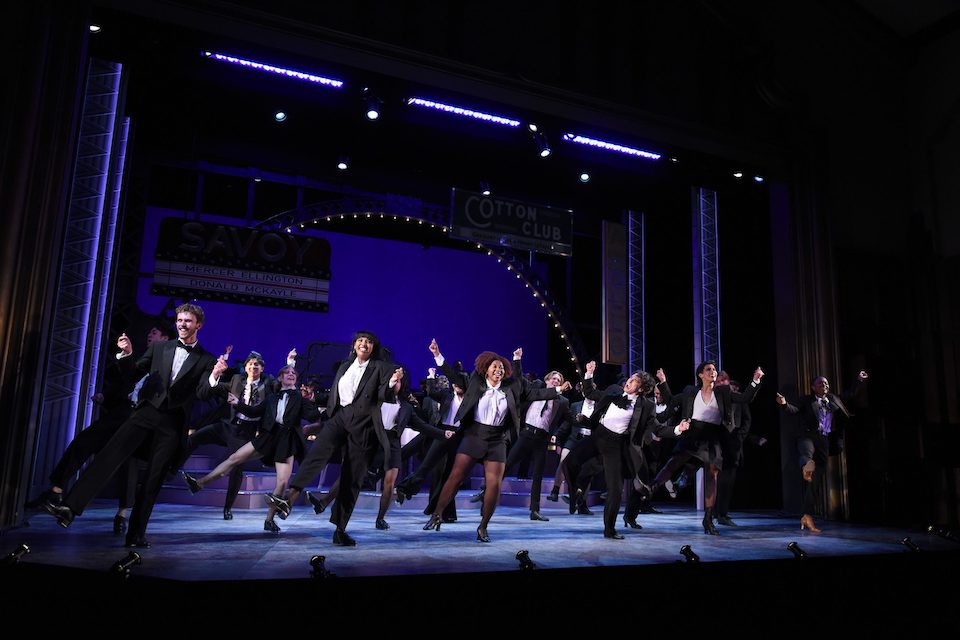 “The Rhythm of the Duke”: The Legacy, History, and Celebration of Sophisticated Ladies

Sophisticated Ladies is more than a vivacious, visual spectacle. It is a cross-generational celebration of legacy, both in the original show and in the one being produced now by University Productions and the Department of Musical Theatre.

Inspired by the music of Duke Ellington, the original Broadway production brought his sounds, lyrics, and lived experience to wider audiences in a new, theatrical way, giving mainstream visibility to his artistic genius. His son, Mercer Ellington, spearheaded the production’s music direction, leading a full orchestra onstage, when traditionally they had played from the pit, making history as the first conductor to depart from this conventional practice. Duke Ellington’s granddaughter and Mercer’s daughter, Mercedes, joined the show as an assistant choreographer who, “little by little,” became a full-time member of the cast. When asked in a conversation at U-M in August about what it meant to carry the Duke’s legacy, Mercedes reflected on this fondly. However, she also talked about adding to his legacy with her own, carving a path as a dancer and choreographer of color while pushing against many obstacles. In addition, she spoke about preserving his art, then and now, through the Duke Ellington Center of the Performing Arts. All in all, Mercer and Mercedes Ellington’s work on Sophisticated Ladies is the epitome of a full-circle moment, a family affair with three generations of Ellingtons building a powerful and enduring history! 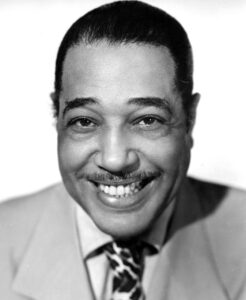 Legendary composer and bandleader Duke Ellington, whose music is celebrated in Sophisticated Ladies.

Sophisticated Ladies took the world by storm when it opened on Broadway on March 1, 1981, at the Lunt-Fontanne Theatre. Considering the groundbreaking style of the musical and the many barriers that existed for artists of color, there were storms behind the scenes as well. Manheim “Manny” Fox, one of the show’s producers, claimed to have first conceived the show after creating a five-album retrospective of Duke’s work. With the help of John Gare, the plot of the book – the script of a musical, as distinguished from the music and lyrics – centered the evolution of Duke Ellington and his band during their time as the house musicians of the notorious Cotton Club (1927–38), providing innovative entertainment that both broke barriers and reinforced roadblocks for artists of color. However, as the production process continued, the book written by Gare and revised by Samm-Art Williams was eventually cut completely in favor of staying true to the musical’s core: Duke’s oeuvre. As a result, the once more conventional musical (one with a story that is propelled by dialogue and music) was now a revue (multiple vignettes that include song and dance).

Here is where the brilliant director/choreographer, Mr. Donald McKayle, stepped in to breathe life into the revue by staging the numbers with aplomb and choreography that he believed exemplified Duke’s music. McKayle was only recently credited with the monumental force he put behind the work. Perhaps this was because at one point in the rehearsal process, McKayle quit, was replaced by artist Michael Smuin, and then asked promptly to come back. Or because there was the dispute between who was responsible for the show’s inception – McKayle or Manny Fox. 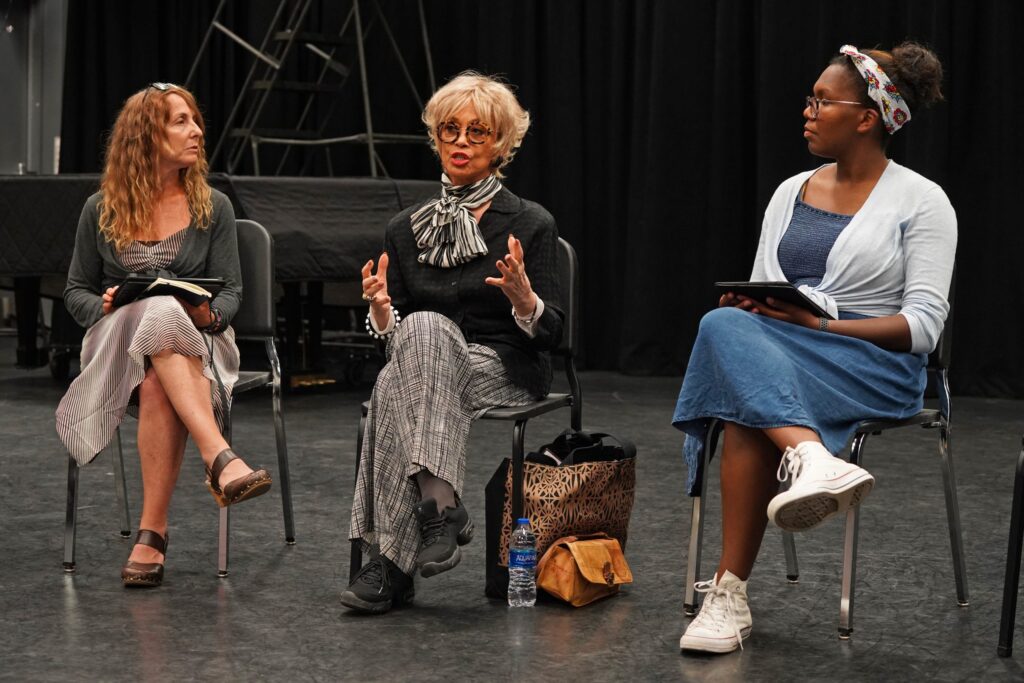 Mercedes Ellington (center), member of the original Broadway cast and granddaughter of Duke Ellington, was joined by Karin Waidley (left) and Nya Johnson, in a conversation with the Sophisticated Ladies cast, the directors and choreographers, and Michael McElroy, chair of the Department of Musical Theatre. Photo credit: Peter Smith Photography

The issues that beset this musical’s journey to Broadway (a.k.a. the Great White Way) did not stop with the omission of a conventional book and disputes between ownership, but also were manifest in its portrayal and idealization of the Cotton Club during Duke Ellington’s time, a club that “embraced” and exoticized African Americans as entertainers but barred them as patrons. Tensions hit the artistic team as well. Due to the exhausting nature of the rehearsal process, tap legend Gregory Hines quit or got fired and then was rehired. It was an evolving and dramatic turn of events. By the time it closed on January 2, 1983, Sophisticated Ladies had run for 767 performances and earned two Tony Awards, with eight nominations. To bring the music of Duke Ellington and the immense talent of the original contributors to such a wide audience was not without cost, but the fact that Sophisticated Ladies lives on for us today is a testament to the individuals who persevered to make it happen.

Celebrating the Artists of the Past and Today

Throughout the show, the audience will see multiple styles of dance blending together with the tremendous tap and jazz that resonates from the original. The director/choreographers, Ayodele Casel and Torya Beard, celebrate the first contributors as well as their monumental legacies and long list of mentors by creating a profound production that represents the diverse cultures and peoples you see given homage to and present here. Torya and Ayodele encouraged the student-artists to embrace and honor the resiliency of the artists that have come before them by proudly bringing their legacies forward to new audiences. Some of the artists who were in the original cast are legends, like Judith Jamison, Gregg Burge, Hinton Battle, Phyllis Hyman, Gregory Hines, and more. Combined, Torya and Ayodele have been mentored by a number of iconic and generous artists, including Hines, Ted Louis Levy, Baakari Wilder, William Esper, Jeanine Tesori, Kevin Iega Jeff, Ronald K. Brown, Cleo Parker Robinson, Linda Spriggs, Andrea Haynes Johnson, Fredrick Earl Mosley, and Gary Abbott, among many other elders and peers who have influenced and inspired them greatly.

When asked about her and the rest of the cast’s stake in bringing the original Sophisticated Ladies to the stage, Mercedes said “The cast was in charge. We were allowed to bring ourselves, [our talents], and our interpretations to the material… We even refused to perform when Gregory [Hines] was fired.” This idea of bringing oneself to the material was reflected in the multicultural casting and creative teams of the original and of this production, honoring the desire of Donald McKayle, who stated in the original libretto, “The cast should be racially mixed, representing any and all who rocked to the rhythm of the Duke.” At the beginning of this rehearsal process, in a wonderful evening of conversation, Mercedes Ellington challenged these artists to carry the same ideals, for the dancers to celebrate the legacies found here while remembering their histories – to walk alongside the accomplishments of past performers while recognizing the barriers they broke through that tried to keep them from being seen as their full selves.

Our hope is that audience members see each cast member shine: in their own unique way, in all of their humanity, through the music of Duke Ellington’s timeless classics and the enduring impression that dance has had and still does have in American culture, while adding their own stories to those who have come before them. The creative team encourages all of us to embrace our legacies, for they are our superpowers through which we can ground fellowship, spark joy, and initiate change in the world!

Sophisticated Ladies runs through October 16 at the Lydia Mendelssohn Theatre. For tickets or more information, visit the SMTD events calendar.

Dr. Karin Waidley (resident dramaturg) is a new lecturer in the Department of Theatre and Drama, serving as dramaturg for the ten-production season. She has been an artist/scholar/teacher for over two decades and most recently was a Fulbright Scholar and a Fulbright Specialist to Kenya. Before that, she was a full professor at Western Colorado University, specializing in devising new work and theatre for social justice and violence prevention.