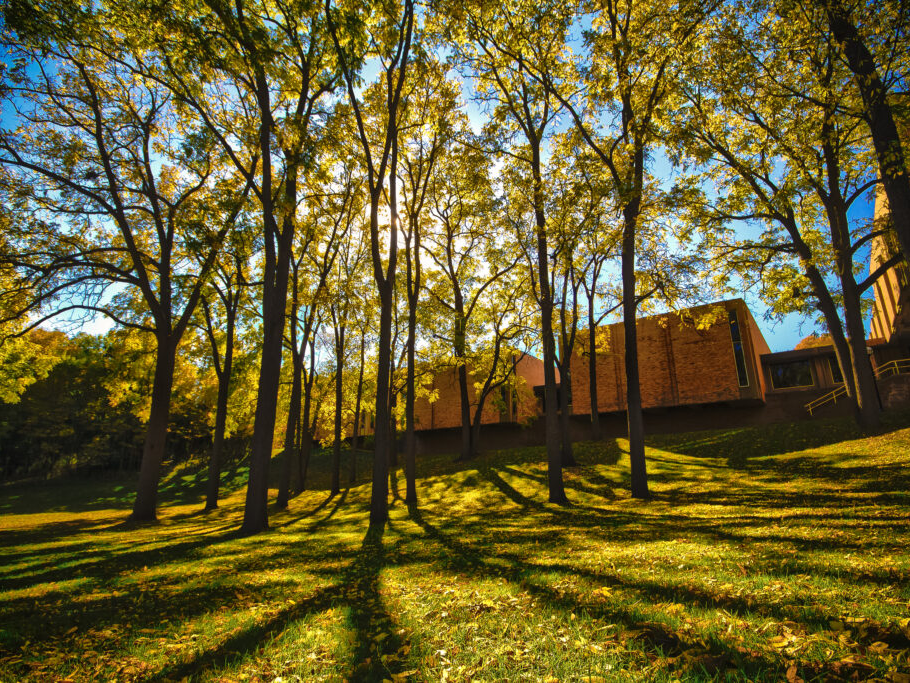 The School of Music, Theatre & Dance is delighted to welcome new faculty in the departments of performing arts technology, strings, musical theatre, and voice.

Anıl Çamci, Assistant Professor of Music, Performing Arts Technology
Anıl Çamcı is an artist and researcher whose work investigates new tools and theories for multimodal worldmaking using a variety of media ranging from electronic music to virtual reality. Previously, he was a postdoctoral research associate at the University of Illinois at Chicago’s Electronic Visualization Laboratory, where he led research projects on human-computer interaction and immersive audio in virtual reality contexts. Prior to this appointment, he worked as a faculty member of the Istanbul Technical University, Center for Advanced Studies in Music where he founded the Sonic Arts program. He completed his PhD at Leiden University in affiliation with the Institute of Sonology in The Hague, and the Industrial Design Department at Delft University of Technology. He holds a degree in multimedia engineering from the Media Arts and Technology Department at the University of California, Santa Barbara. Çamcı’s work has been presented throughout the world in journals, conferences, concerts and exhibitions. He has been granted several awards and scholarships, including the Audio Engineering Society Fellowship, and the ACM CHI Artist Grant.

Max Dimoff, Associate Professor of Music, Strings
Since Maximilian Dimoff’s appointment in 1997 as principal double bass of The Cleveland Orchestra, he has appeared as soloist with the orchestra at Severance Hall and Blossom Music Center, as well as on tour at Carnegie Hall and in Europe. Dimoff’s career began with an appointment as assistant principal bass of the San Antonio Symphony while he was still a student at Northwestern University. He was soon promoted to the principal bass position in San Antonio. Dimoff was also a member of the Grant Park Symphony Orchestra in Chicago. In 1993, he moved back to his hometown of Seattle to join the Seattle Symphony Orchestra. Dimoff studied with Jeff Bradetich while attending Northwestern University. Other inﬂuential teachers include Warren Benﬁeld of the Chicago Symphony Orchestra, Gary Karr, Eugene Levinson of the New York Philharmonic, and Ronald Simon of the Seattle Symphony. Dimoff has taught master classes at major music schools including The Juilliard School, the Manhattan School of Music, Northwestern University, Carnegie Mellon University, the University of North Texas, the University of Michigan, and the Glenn Gould School at the Royal Conservatory in Toronto. Currently, Dimoff heads the double bass department at the Cleveland Institute of Music and is a coach and teacher with the New World Symphony in Miami. He performs on a double bass dating from 1651 by the Italian maker Antonio Mariani.

Ann Evans Watson, Clinical Assistant Professor of Music, Musical Theatre
Ann Evans Watson is an Equity actor and vocal instructor/coach, specializing in musical theatre literature and the training of professional voices. She has taught master classes for singing actors at universities across the U.S. and has been a master teacher/lecturer and cabaret artist for National Association of Teachers of Singing conferences. She developed the curriculum and was chair of the Musical Theatre Department at Washington Academy of Performing Arts from its inception to 1998, and has participated in the creation of curriculum as well as teaching all music theatre disciplines at the Village Theatre Institute. Evan Watson’s students have consistently placed at top universities across the country, and continue to study with her in Seattle and NYC post-graduation. As an actor/singer/dancer/cabaret artist, Evans Watson has performed in NYC at Circle in the Square, Lincoln Center, the Cherry Lane, the Duplex, and Don’t Tell Mama’s, and she has graced the NW stages in leading roles in Man of La Mancha, Carousel, Taming of the Shrew, A New Brain, and Dames at Sea. Evans Watson’s online publication, The Belt Book, was the premier resource dedicated to helping singers find and examine belt and belt mix literature for musical theatre. She’s also published articles on navigating training and the college audition circuit and homeopathic vocal remedies in both the NATS Journal of Singing and several online publications. She has recorded two albums; Chamber Music, and Crossword with her son, music director Evan Zavada.

Chelsea Packard, Clinical Assistant Professor of Music, Musical Theatre
A specialist in private voice instruction and an alumna of SMTD’s Department of Musical Theatre, Chelsea Packard appeared in Kristin Chenoweth’s PBS Live recording of her concert Home, in which she and Chenoweth performed a duet of “Enough Is Enough.” Packard sings with the Grammy-nominated gospel choir Broadway Inspirational Voices and can be heard on the NBC Series Smash in all ensemble numbers. She was the original “Woman 2” in Edges, by SMTD alumni Justin Paul and Benj Pasek, and can be heard on the cast recording. As a teacher and clinician, Packard has worked with the Joffrey Ballet, Broadway Classroom, Broadway Workshop, A Class Act NY, Brave Arts, Broadway for All, Broadway Teaching Group, and Broadway In South Africa. Her private voice studio in New York is an offshoot of her mentor’s, Tony Award-winner Joan Lader. A proud member of AEA, SAG-AFTRA, and AGVA, Packard’s performing credits on Broadway include Wicked (Elphaba understudy); Beautiful (Cynthia understudy); Hands on a Hardbody (Original Broadway Cast); Promises, Promises (Original Revival Cast); and New York Spectacular @ Radio City (Jenna). She has toured nationally with Kristin Chenoweth in her Some Lessons Learned album tour (featured cast member), and in Wicked (Nessarose Understudy). Regional productions include Legally Blonde (Elle Woods) at Marriott Lincolnshire; Aida (Amneris) at Kansas City Starlight; Meet Me In St. Louis (Esther) and Summer of ’42 (Dorothy) at Buck’s County Playhouse; A Funny Thing…Forum (Philia) at Paper Mill Playhouse; and Rock Bottom at the Public Theatre in NYC.

Louise Toppin, Professor of Music, Voice
Louise Toppin, has received critical acclaim for her operatic, orchestral, and oratorio performances in the United States, Europe, Czech Republic, Sweden, Uruguay, Scotland, China, England, New Zealand, the Caribbean, Cuba, Puerto Rico, Colombia, Bermuda, Japan and Spain. She has appeared in recital on many concert series including Carnegie Hall, Merkin Hall, Kennedy Center and Lincoln Center, and has sung with orchestras throughout the United States and around the world. Toppin’s opera roles include the title role in the world premiere of Luyala by William Banfield, the title role in Scott Joplin’s Treemonisha, Mary in William Grant Still’s Highway One, Maria in the world premiere of Joel Feigin’s Twelfth Night, the Queen of the Night in Mozart’s Magic Flute, Donna Anna in Mozart’s Don Giovanni, and Clara in Gershwin’s Porgy and Bess. Toppin has recorded 17 CDs of American music and, since 2010, has been on the summer faculties of the Baltimore Summer Opera Workshop, the Vocal Course for The National Conservatory (Bogota, Colombia), the Amalfi Coast Music Festival (Maiori, Italy), and the Accra Symphony Operatic Course (Accra, Ghana). As a scholar, she is a much sought-after lecturer on the music of African American composers and is the recipient of many teaching awards, including the North Carolina Board of Governor’s Excellence in Teaching Award (the state’s highest awards). Previously, Toppin was the Kappa Kappa Gamma Distinguished University Professor of Music and Chair of the Department of Music at the University of North Carolina, Chapel Hill.

Ranaan Meyer, Double Bass
Ranaan Meyer is quickly being recognized throughout the music world for his many projects, including his compositions and double bass work with the electrifying string trio, Time for Three. In addition to being a talented composer and double bass player, Meyer is also actively involved in education programs across the country, and is frequently called upon to solo with orchestras. As a composer and performer, Meyer has a rare versatility, and is an accomplished jazz musician who has performed with the likes of Branford Marsalis, Jane Monheit, and many more. In Time for Three, with Zach DePue and Nick Kendall, he performs a wildly popular mix of classical, country western, pop, gypsy, and jazz. The trio continues to collaborate, tour and record together, releasing albums on the record label eOne. Meyer began studying music at age four, soon graduating from piano to cello and then to double bass; he graduated from the Curtis Institute of Music in 2003. Meyer’s teaching experience led him to develop two bass camps of his own: the Wabass Institute in Wabash, Indiana, and the Wabass Workshop, held at the Curtis Institute of Music. Meyer performs regularly with his mother Norma Meyer, a pianist, and is regularly commissioned to compose for solo bass, bass and piano, and other ensembles.