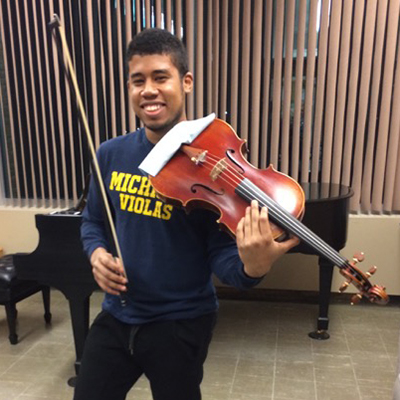 Caleb Georges (MM ’19, viola, MM ’19, chamber music), a student in Professor Caroline Coade’s viola studio, placed third in the prestigious Sphinx Competition in February 2019. The competition is open to young black and Latinx string players and is judged by an internationally renowned panel of experts. Georges, the only violist in the semi-finals round of the senior division (ages 18-30), was selected for the final round and ultimately won third prize. He will receive a $10,000 award to advance his career.

A native of St. Lucia, Georges came to the U.S. in 2013 to attend Bowling Green State University and study with Matthew Daline. After completing his dual master’s degrees from STMD this spring, Georges will remain in Coade’s studio in the specialist program. “I’m thrilled Caleb is staying at SMTD to continue working with me,” Coade said. “He is a super hard worker and is deserving of all the accolades that come his way. I’m so proud of him!”

Georges is a member of the Ivalas Quartet, which won first prize in the 2018 Briggs Chamber Music Competition. The group, which also includes SMTD students Reuben Kebede, Anita Dumar, and Pedro Sanchez, has worked with the Sphinx Organization to play outreach concerts at elementary and middle schools in Detroit and Flint. All four members of the quartet are black or Latinx, and they found great inspiration playing for young children of color who are hearing classical music for the first time, performed by people who look like them. “We feel a strong responsibility to not only play with all of our hearts but to strive for the highest standard of playing in every performance and to be living proof of the power of diversity in all art forms,” they say.

The Sphinx Organization was founded by Aaron Dworkin, former SMTD dean and current faculty member in the Department of Entrepreneurship & Leadership. He began the organization in 1997 with the goal of addressing the underrepresentation of people of color in classical music. The Sphinx Competition is the most well known of its many programs, which also include early music education in the Detroit and Flint communities, mentorship for musicians and arts leaders of color, and scholarships—of which Georges is a recipient.