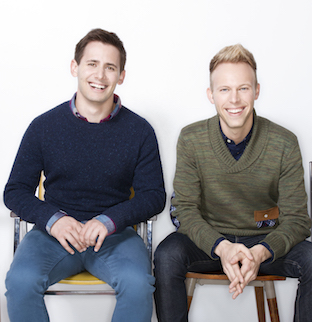 Alumni of the University of Michigan School of Music, Theatre & Dance were named winners at the 60th GRAMMY Awards, which took  place at New York City on Sunday, January 28.

Last year, Pasek and Paul won a Golden Globe and an Oscar (Best Original Song) for “City of Stars” from the film La La Land, for which they wrote the lyrics. In January, they won a second Golden Globe in the same category for “This Is Me” from The Greatest Showman, which is also nominated for an Academy Award.

At this early stage in their careers, Pasek and Paul are on their way to beoming “EGOTs”: winners of Emmy, GRAMMY, Oscar, and Tony Awards. It’s a feat they may achieve this year if they are nominated for and win an Emmy Award for the music they wrote for A Christmas Story, which aired in December on FOX TV.

Also winning a GRAMMY Award this year, in the category of “Choral Performance,” is the PRISM Quartet, comprising former students of SMTD saxophone Emeritus Professor Donald Sinta, including Timothy McAllister (BM ’95, MM ’97, DMA ’02), who is Sinta’s successor as professor of saxophone at SMTD. The album, Gavin Bryars: The Fifth Century (ECM), conducted by Donald Nally, features the quartet with the mixed choir The Crossing, which includes alumna and current SMTD doctoral student in voice, Kelly Bixby (BM ’06).

Other SMTD alumni connected to GRAMMY-nominated albums this year were Ian Eisendrath (BM ’03, conducting), music supervisor and arranger for Come From Away, and Gavin Creel (BFA ’98, musical theatre), who plays a leading role in the new cast recording  of Hello, Dolly!  Both albums were nominated in the Musical Theater Album category.

In addition, tenor Nicholas Phan (BM ’01, voice) was nominated in the category of “Classical Solo Album” for Gods & Monsters with his accompanist Myra Huang. The work reflects Phan’s life-long fascination with myths and legend and features Lieder by the great Romantic composers of the Germanic tradition including Beethoven, Brahms, Mahler, Mendlessohn, Schubert, Schumann and Wolf.