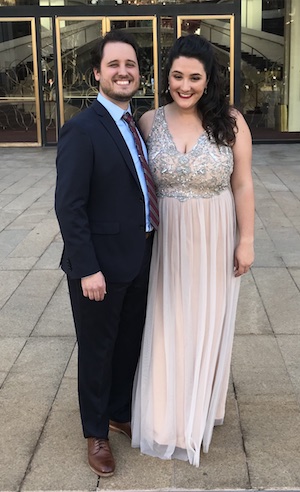 The first married couple to ever win the nation’s most prestigious vocal competition-the Metropolitan Opera National Council Auditions-are both voice alumni of SMTD. Tenor Carlos Enrique Santelli (MM ’16) and mezzo-soprano Ashley Dixon (MM ’15), who were married in September 2017, were among five winners chosen after many months of competitions at the district, regional, and national levels. Each winner receives a $15,000 cash prize and the exposure that comes with winning the competition that has launched the careers of many of opera’s biggest stars.

The final phase of the competition took place on April 29 when the nine finalists performed on the Met stage. Each sang two arias with the Met orchestra, led by Bertrand de Billy. The audience comprised artistic directors of leading opera companies, artist managers, important teachers and coaches, music critics, and many other industry professionals with the potential to play an influential role in the career of a young singer. The concert was recorded for broadcast at a later date on public radio stations across the United States.

Both Santelli and Dixon studied with Freda Herseth at SMTD, and they met when both performed in the opera theatre production of Dead Man Walking. Santelli, who attended U-M with a Jessye Norman Graduate Fellowship, is in his second season as a member of Los Angeles Opera’s Domingo-Colburn-Stein Young Artist Program. His work on the company’s mainstage has included study covering both Orpheus in Orpheus and Eurydice and Nadir in The Pearl Fishers. He also spent the last two summers as a member of Santa Fe Opera’s distinguished Apprentice Artist Program.

Dixon is in her first year of the San Francisco Opera Adler Fellowship program. In the upcoming 2018-19 season, she will be covering the role of Sara, Duchess of Nottingham in Roberto Devereux and will be making her main stage debut in Jake Heggie’s It’s a Wonderful Life as the alto soloist in the angel quartet.

​The Met Auditions, currently in their 64th year, were the public’s first introduction to many of today’s best-known stars, including Renée Fleming, Susan Graham, Frederica von Stade, Deborah Voigt, Lawrence Brownlee, Thomas Hampson, Eric Owens, Angela Meade, Nadine Sierra, Jamie Barton, and Ryan Speedo Green. Recent winners who have gone on to embark on major operatic careers include Paul Appleby, Anthony Roth Costanzo, Lisette Oropesa, Susanna Phillips, and Alek Shrader. Over 100 singers who participated in the National Council process early in their careers are on the Met’s roster in the current season.