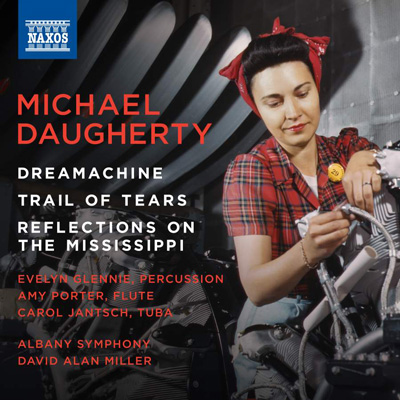 Titled Dreamachine, the album is performed by the Albany Symphony under music director David Alan Miller. It includes: Trail of Tears* for flute and orchestra with acclaimed American flutist and SMTD professor Amy Porter; Reflections on the Mississippi, featuring Carol Jantsch, principal tuba of the Philadelphia Orchestra and a 2006 graduate of SMTD; and the title work, Dreamachine* for solo percussion and orchestra, with the renowned Scottish percussionist Dame Evelyn Glennie

Composed in 2010, the flute concerto Trail of Tears dramatizes the tragic governmental forced relocation of Native Americans in 1838 and meditates on how the human spirit discovers ways to deal with adversity. Reflections on the Mississippi (2013), a concerto for tuba and orchestra, imagines a musical voyage down the legendary Mississippi River from Iowa to Louisiana. And Dreamachine (2014), for solo percussion and orchestra, is a tribute to the imagination of inventors who dreamed of new machines, both real and surreal.

Michael Daugherty first came to international attention when his Metropolis Symphony was performed by the Baltimore Symphony Orchestra, conducted by David Zinman, at Carnegie Hall in 1994. Since that time, Daugherty’s music has entered the orchestral, band, and chamber music repertoire and made him, according to the League of American Orchestras, one of the 10 most-performed American composers of concert music today.

Daugherty has taught at SMTD since 1991 and is a mentor to many of today’s most talented young composers. He is also a frequent guest of professional orchestras, festivals, universities, and conservatories around the world.

Amy Porter first leapt to international attention winning the Third Kobe International Flute Competition in Japan, which led to invitations to perform throughout the world. She  combines her musical talent with her passion for scholarship, and her musical achievements have resulted in many awards and accolades for her concerts and discography.

Carol Jantsch has been principal tuba of The Philadelphia Orchestra since 2006. She won the position during her senior year at SMTD, becoming the first female tuba player in a major symphony orchestra. A renowned tuba soloist, she gives solo recitals regularly, and has appeared as a concerto soloist with ensembles around the world.

Evelyn Glennie is the first person in history to successfully create and sustain a full-time career as a solo percussionist, performing worldwide with the greatest conductors, orchestras, and artists. She a leading commissioner of new works for solo percussion, with more than 200 pieces to her name from many of the world’s most eminent composers.

The Nashville Symphony recordings have received six GRAMMY® Awards, including Best Classical Contemporary Composition in 2011 for Daugherty’s piano concerto Deus ex Machina and in 2017 for his cello concerto Tales of Hemingway.