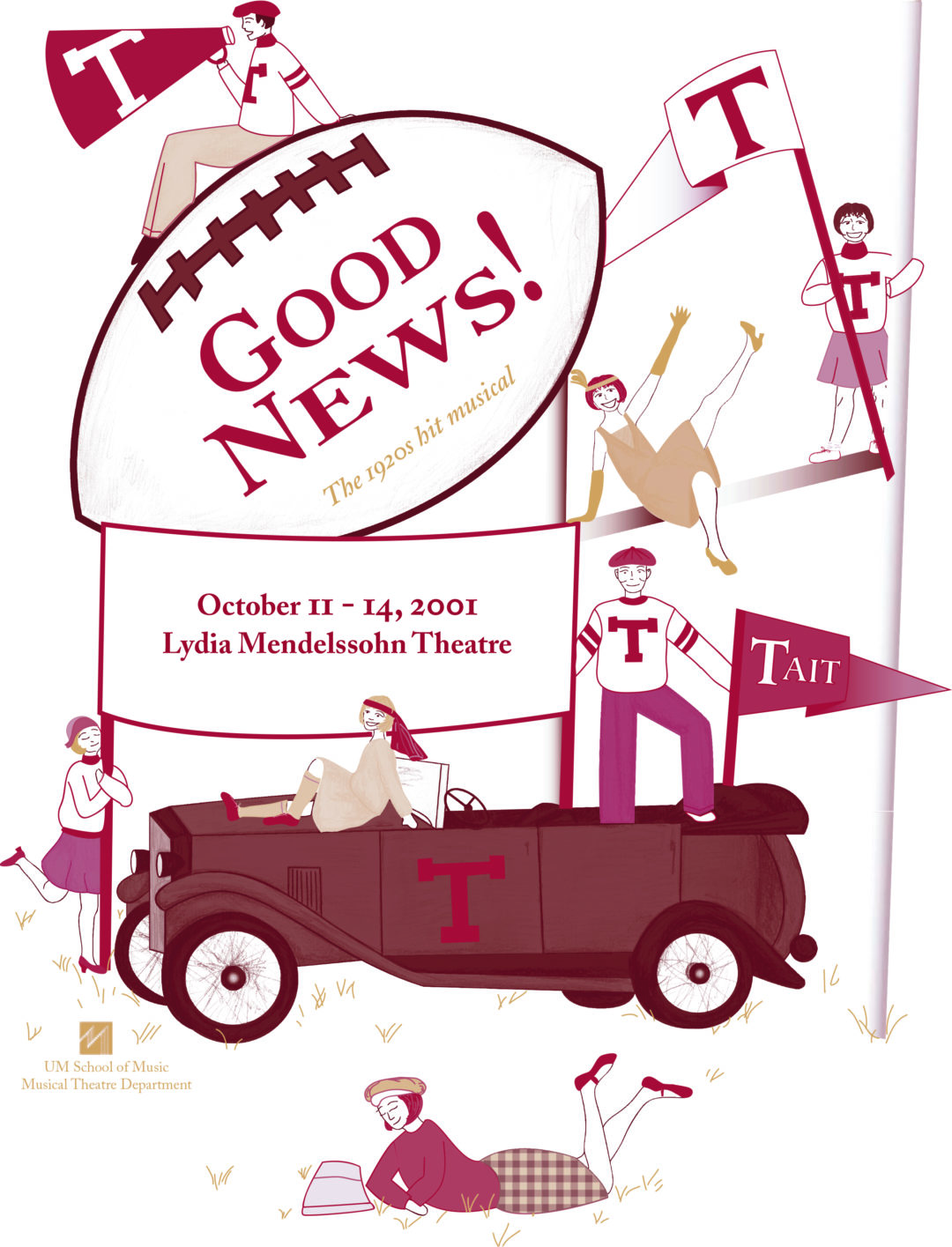 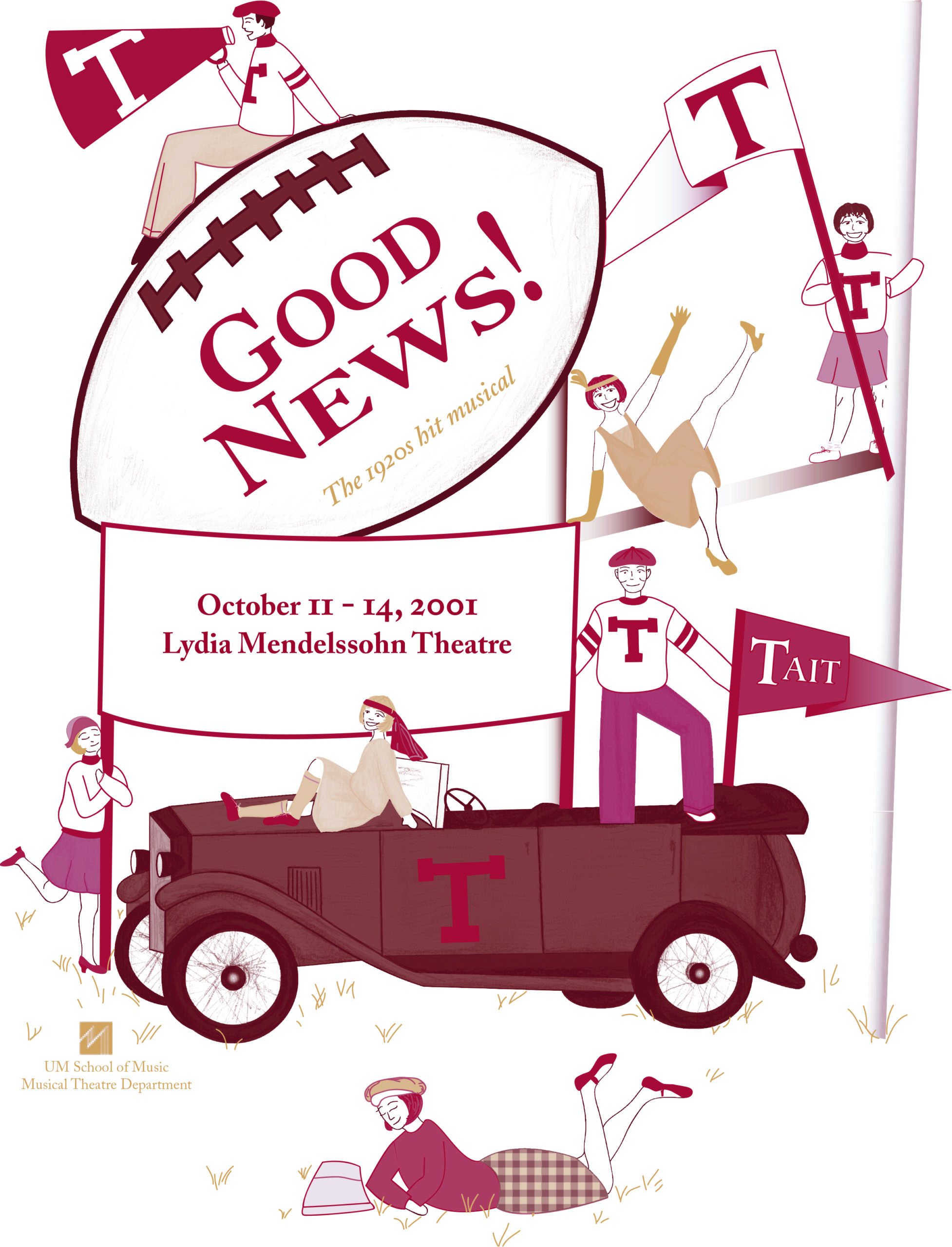 Good News! premiered on Broadway in 1927, the same year as Show Boat, helping to mark the rebirth of the musical comedy which had fallen out of fashion thanks to the popularity of the musical revues that were the rage in the ’20s. Written by the team of B.G. DeSylva, Lew Brown, Ray Henderson, and Frank Mandel, the show immediately became one of the musical theatre successes of that decade, in large part because of its hit songs including “Button Up Your Overcoat,” “The Varsity Drag,” “The Best Things in Life Are Free,” “Life is Just a Bowl of Cherries” and “You’re the Cream in My Coffee.”

In the 1920s, colleges were reminiscent of country clubs, as is the case at the story’s fictional setting, Tait College. Football reigns king on the Tait campus and Tait’s collegians have a hot time keeping up with their star football player, Tom Marlowe. Most will drop everything to watch him practice, to do something to earn his favor, or follow the latest chapter in his soap-opera romance with the daughter of one of the school’s wealthiest benefactors. Only one girl seems oblivious to the folderol – Connie Lane, an intensely studious woman. Ironically, Connie is recruited to help when Marlowe fails the astronomy final he needs pass to in order to play in the big game Saturday. The story develops when the football star and the tutor fall for each other, and the football coach and the astronomy professor rekindle their own college romance. Inevitably, these couples’ love can only survive if the team wins the big game.

The musical was adapted twice for film, first in 1930 and then again in the more successful MGM version of 1947 that starred June Allyson and Peter Lawford. In 1974, following a year of preview performances on the road where the show was rewritten almost every night, producers took one more shot at bringing Good News! back to New York. It closed on Broadway after only two performances. UM will present the popular, revised version of Good News! that was written in 1993 by Mark Madama and Wayne Bryan for the Musical Theatre of Wichita.

Good News! first opened on Broadway at the 46th Street Theatre on September 6, 1927, and quickly became one of the biggest hits of the Roaring Twenties, running for 551 performances. It boasted a lively collegiate setting, a sassy sense of humor, a jazzy orchestra and a youthful, energetic cast. Its best feature, however, was the blissfully cheerful score by a new talented young writing team, B.G. (Buddy) DeSylva, Lew Brown and Ray Henderson.

Shortly afterwards, in 1930, MGM purchased the film rights to Good News!, releasing an “All Singing, All Dancing” movie version. The cast included a few members of the Broadway company and even fewer of its songs. More successful was the MGM 1947 remake, retaining six of the DeSylva, Brown and Henderson tunes (with many lyrics extensively rewritten) and featuring a new script by the team of Betty Comden and Adolph Green. Although this popular movie was supposedly set in the Twenties, its costumes and musical arrangements were very noticeably Forties in style.

In 1973, producer Harry Rigby announced he would produce a star-studded Broadway revival of the show. A talented creative team was assembled, and film stars Alice Faye and John Payne were signed, along with Broadway veteran Stubby Kaye. Because Rigby had already explored the 1920s, with his recent successful revival of No, No, Nanette, he re-located Good News! to the 1930s. A year-long national tour preceded the Broadway opening, during which audiences enjoyed seeing the talented stars onstage, and hearing the wonderful songs again. Plot-wise, however, the show received mixed response. The story was now set in the Depression, eliminating all the flavorful references to the 1920s. Also, the burden of the plot now shifted onto the shoulders of the three adult characters, and away from the students around whom any collegiate show naturally revolves. Various writers, directors, and choreographers reworked the production, but when Good News (minus the explanation point and John Payne, who was replaced by Gene Nelson) opened on Broadway, it only lasted 16 performances.

In autumn of 1992, while planning an upcoming season, Wayne Bryan, Producing Director for Music Theatre of Wichita, became fascinated with the idea of a new version of Good News!. He contacted Mark Madama and together they approached the licensing house Tams-Witmark, who in turn contacted the heirs of the authors, and eventually rights were given to try a new adaptation. An entirely new libretto resulted, with the setting now restored to the 1920s, and with the main emphasis once again on the students at Tait College. When this new version debuted at the Music Theatre of Wichita, an authentic Twenties flavor was also evoked with new orchestrations and vocal arrangements by Craig Barna and imaginative period dances by Linda Goodrich. Since the Wichita premiere in 1993, the new Good News! has been performed throughout the United States and England with many future productions planned. A highly acclaimed cast album was also released, and is currently available on CD.

← The Good Person of Szechwan The Consul →