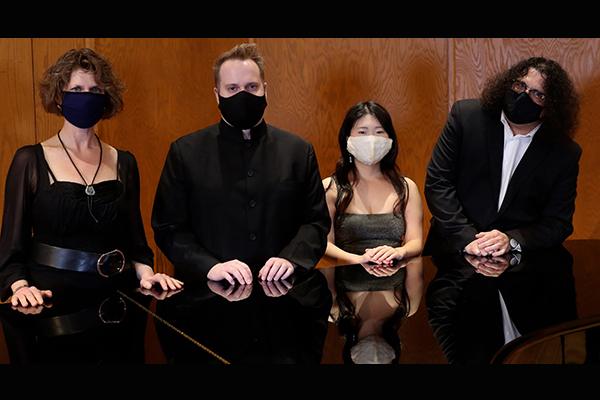 “Composed in 1976, 1-100 for multiple pianos demonstrated a curious confluence of free and fixed musical processes. The fixed systems control the background harmonic language and overall textural density (each player reads from the same written sequence of 100 sustained chords, rigidly arranged in the familiar baroque sequential standby of ‘roots rising a 4th, descending a 5th’, starting at the top of the keyboard and inexorably and slowly spiraling to the bottom). The free(-ish) process is designed to create unwritten harmonic (and rhythmic) divergences by overlapping the juxtaposition brought about by the fact that each individual reading of the chordal text is independent of those of the other players, since each pianist may only move to the next chord after the preceding one has decayed. Individual touch and hearing are therefore indeterminate factors causing the desired out-of syncness as the overall motion of the piece decelerates – as the chords get lower, they get thicker and the decay process slower.” 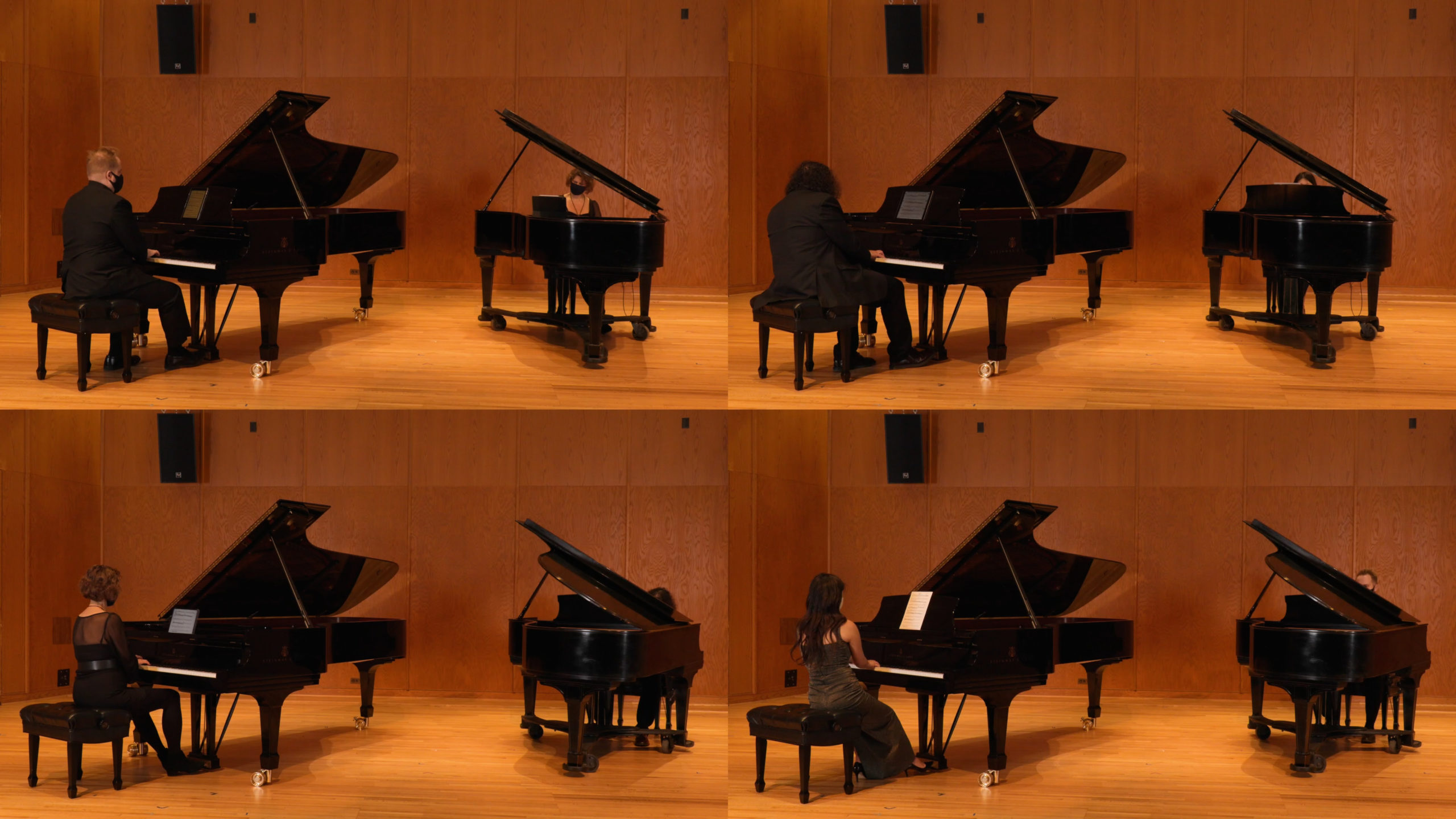 What drew you to this piece?
In the summer of 1993, I was working in a summer program at Royal Winnipeg Ballet and was housed in a Salvation Army hostel. I was on the sixth floor of this building and had a view of the city’s skyline which being in the upper midwest is …..well you know, the upper midwest. I recently had been turned on to two pieces that I listened to constantly that summer, Michael Nyman’s 1-100, performed by the English ensemble Piano Circus, and Gavin Bryars’s (then) newly revised version of Jesus’ Blood Never Failed Me Yet, both of which are long-form works built on sparse, or minimal compositional materials. I had a little Grundig portable sound system on which I listened to these two works nearly every evening during that residency. Coming from California I understood day/night as daylight is daytime and night as when the sun went down. There is no twilight on the coast, just the sun reflecting on the water, and then BOOM, it’s dark. I’d never spent a summer above the 40th Parallel and Winnipeg at the 49th parallel has very long summer nights. Listening to these two works at night accompanied the long slow twilight with the subtly shifting colors of the evening into a slowly encroaching night. I knew Nyman work as a musicologist and as a composer on several of Peter Greenaway’s films (1-100 was written for a Greenaway short film which sadly I’ve never seen), where his work was very active and dramatic and the influences of Handel and Mozart are all over those scores. 1-100 was, save for its Baroque flavored bass line, entirely different and both this and the Bryars work remain desert island pieces for me. I have always wanted to perform the piece and with the current state of “distanced” music-making being the order of the day, I thought this work would be a perfect tonic to undertake amidst these safety requirements. I have a loosely structured partnership with Dr. Kathryn Goodson with whom I’ve done a variety of four-hand piano works and we were co-curators for a Michigan Chamber Players concert that was one of the last public concerts this past winter before the shut-down, and are planning a program of works that feature Debussy’s many pieces created around the Debussy/Louys collaborations we know as Chanson de Bilitis; so I asked her if she wanted to help me set this work. And here we are. The year after first hearing 1-100, Michael Nyman became the crossover star of the 1990s thanks to the massive popularity of his score to the Jane Campion film, The Piano. He’s composed some fantastic film scores in the years since for films by Neil Jordan and Michael Winterbottom and others, in addition to chamber music, songs, and has moved into creating his own visual media works.

What do you hope the listeners will get out of listening to this piece?
Whatever they want. Even with my own music, it was never about my idea getting across but seeing what ideas could spring from the randomness associated with each listener. Mostly, it is my response to this ghastly year of COVID, and more recently, this ghastly season of imbecility run amok. Can’t make music too together, so we have to make it in this distanced format. For this project, I am fortunate to work with musicians whose work I’ve always admired. I’ve played with Kathryn and Hikari before, and while I know Matthew and his work across areas, I never had an opportunity to directly work with him, so it is overall a real treat to work with all three.

It’s ambient music for a distanced midwinter. In between the recording and its posting for public consumption, we will see more imbecility and madness, so I hope this can help (to paraphrase a familiar Beatles lyric) “turn off your mind…..”

What makes this work challenging (or not) and is it any different performing during COVID?
Getting rehearsal space for multiple pianos is tough in the easiest of non-COVID time, while in COVID-land it’s a hot mess of no-go. Fortunately, all the pianists are very, very good and while we’ve talked about the piece here and there, we’re allowing Nyman’s “free and fixed musical processes” to lead us in the absence of rehearsal. Its contemplative, late-summer twilight qualities make it a challenge to remain focused in the traditional way one normally does when making chamber music. I judge my individual chords by how they feel under the fingers. I wait until I no longer feel the key vibration, before moving to the next chord. The others may have their own preference choosing to listen to the sound as it dissipates in the air more than how it feels under fingers. We each have our own read on the decay of the sound. More like the music of Pauline Oliveros, Gavin Bryars, or Harold Budd, you have to let a centered sense of floating carry you from chord 1 to chord 100. In many ways, it’s an ideal piece for COVID music-making.

Anything else you think someone watching or deciding whether or not to watch would want to know.
Get some relief from the news cycle and tune in.