On October 27, 2022, the National Association for Music Educators (NAfME) announced that Marie McCarthy, professor of music education at the School of Music, Theatre & Dance, is the recipient of the 2022 Senior Researcher Award. This award from the NAfME Society for Research in Music Education (SRME) is the organization’s highest honor, recognizing notable scholarship in the field of music education. McCarthy is the 18th recipient of the Senior Researcher Award.

The NAfME announcement naming McCarthy as the award recipient described her as “a scholar of the highest order,” positing that “when future scholars attempt to piece together the sociocultural and historical foundations of music education in the 20th and early 21st century, without a doubt, they will turn to the work of Marie McCarthy.” In praising McCarthy’s work, NAfME president Scott R. Sheehan said, “We are honored to lift up Dr. McCarthy’s incredible career and accomplishments as this award represents a lifetime of dedicated scholarship, thoughtful collaboration, and professional inquiry.” 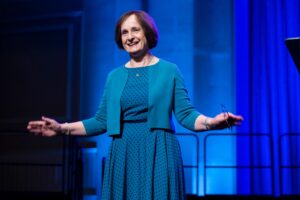 Professor of music education Marie McCarthy on stage at the NAfME National Conference, where she received the Senior Researcher Award. Photo by Lisa Helfert, courtesy of NAfME.

In presenting the award, Carlos R. Abril, chair of SRME, summed up McCarthy’s research: “For over three decades, Dr. McCarthy has produced a steady stream of meaningful and insightful pieces of scholarship, examining the sociocultural and sociohistorical dimensions of music education and music.” He continued, “She has proved to be selfless in her service to various research communities and a gentle but forceful leader, reminding us to think more expansively about research, to raise the standards of our research practices, and to open spaces for marginalized voices.” McCarthy has authored, edited, and contributed to numerous journals and other publications, including her books Passing It On: The Transmission of Music in Irish Culture (Cork University Press, 1999) and Toward a Global Community: A History of the International Society for Music Education, 1953-2003, published to coincide with the 50th anniversary of the International Society for Music Education. She has served as the editor of the Journal of Historical Research in Music Education since 2015. 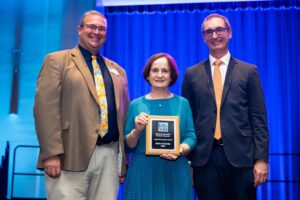 “I think that what makes Marie McCarthy so special within the field of music education is the enormous respect that everyone has for her and her professional accomplishments, whether it be in scholarship, teaching, or service,” noted Michael Hopkins, professor and chair of SMTD’s Department of Music Education. “Dr. McCarthy’s substantial body of scholarship has been deeply influential in a number of different areas within the field of music education. She is the type of professor who is always available for her students and is deeply dedicated to providing them with a high-quality, world-class education. We are very fortunate to have Marie McCarthy as a colleague in our department.”

An alumna of SMTD, McCarthy earned two graduate degrees from U-M: a master’s degree in music education in 1986 and a PhD in music education with a cognate in ethnomusicology in 1990. After 16 years on the faculty of the University of Maryland, McCarthy returned to Ann Arbor to join the SMTD faculty in 2006. Reflecting on the Senior Researcher Award after the conference, McCarthy stated, “I’m deeply honored to accept the award, humbled too, and immensely grateful for this recognition. I acknowledge the many ways in which my graduate studies at the University of Michigan prepared me for a career in higher music education, and ultimately contributed to this affirmation of my research and scholarship by the National Association for Music Education.”