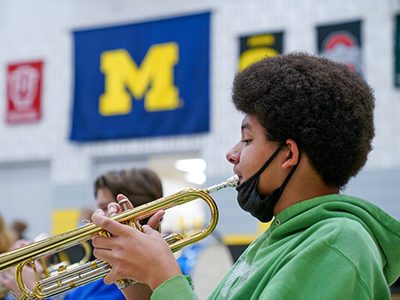 On a chilly November morning in Ann Arbor, 8th grade band students from Parker Middle School, in Howell, Michigan, stepped off a school bus and entered the storied Revelli Hall, home of the Michigan Marching Band. They shuffled into the rehearsal hall, took out their instruments, adjusted their music stands, and readied themselves for the morning. At that point, they may not have realized the fullness of their mission that day: Yes, they were attending a band clinic to learn, but they were also there to teach. 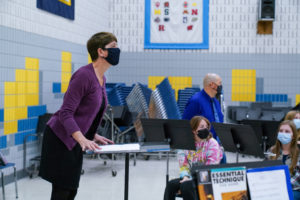 Dr. Colleen Conway, professor of music education, hosts several such clinics each semester, always with multiple goals in mind. She wants to foster a love for playing an instrument in students at all grade levels. She wants to impress upon those students the rich, unique value of a University of Michigan education. She wants to put her undergraduate School of Music, Theatre & Dance students in the same room with seasoned K-12 music educators, to learn valuable lessons from the frontlines. But most of all, she wants to give her students – sophomores studying music education – what she calls “kid face-time,” the all-important exposure to actual students.

Conway explained her thinking to the 8th graders: “If I bring in real live specimens of children, you are able to really help them [the undergraduates] understand a little bit more about how to interact with kids, so your ability to model is really important.” She went on to tell the middle schoolers, “They’re going to watch and learn from you.” In addition to observing, the SMTD students would, later in the day, work directly with the 8th graders in small groups. 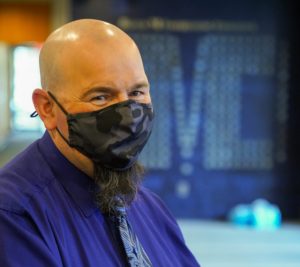 Conway also explained to the 8th graders that she has known their teacher for a very long time; she taught Parker Middle School’s longtime band teacher Jeff Stimson as an undergraduate at Michigan State University before she came to U-M in 2001. A few years later, Stimson, while continuing in his role as Parker’s band teacher, came to SMTD to further his education with Conway, earning a master’s in music education in 2008. He described Conway to his students as “inspirational…one of the best educators I’ve ever known in my life.”

The morning began with a clinic energetically conducted by Michael Vecchio, an SMTD PhD candidate in music education who taught band in New York and Chicago for about seven years. He expressed the view that, for music educators, middle school is “the most important age…because that’s where they either flourish or kind of lose interest.” Peppering the session with pop-culture references and analogies that resonate with middle schoolers, Vecchio illustrated his stated goal: “Don’t take myself too seriously, but take the music very seriously,” thereby making music education fun, relevant, and full of purpose. 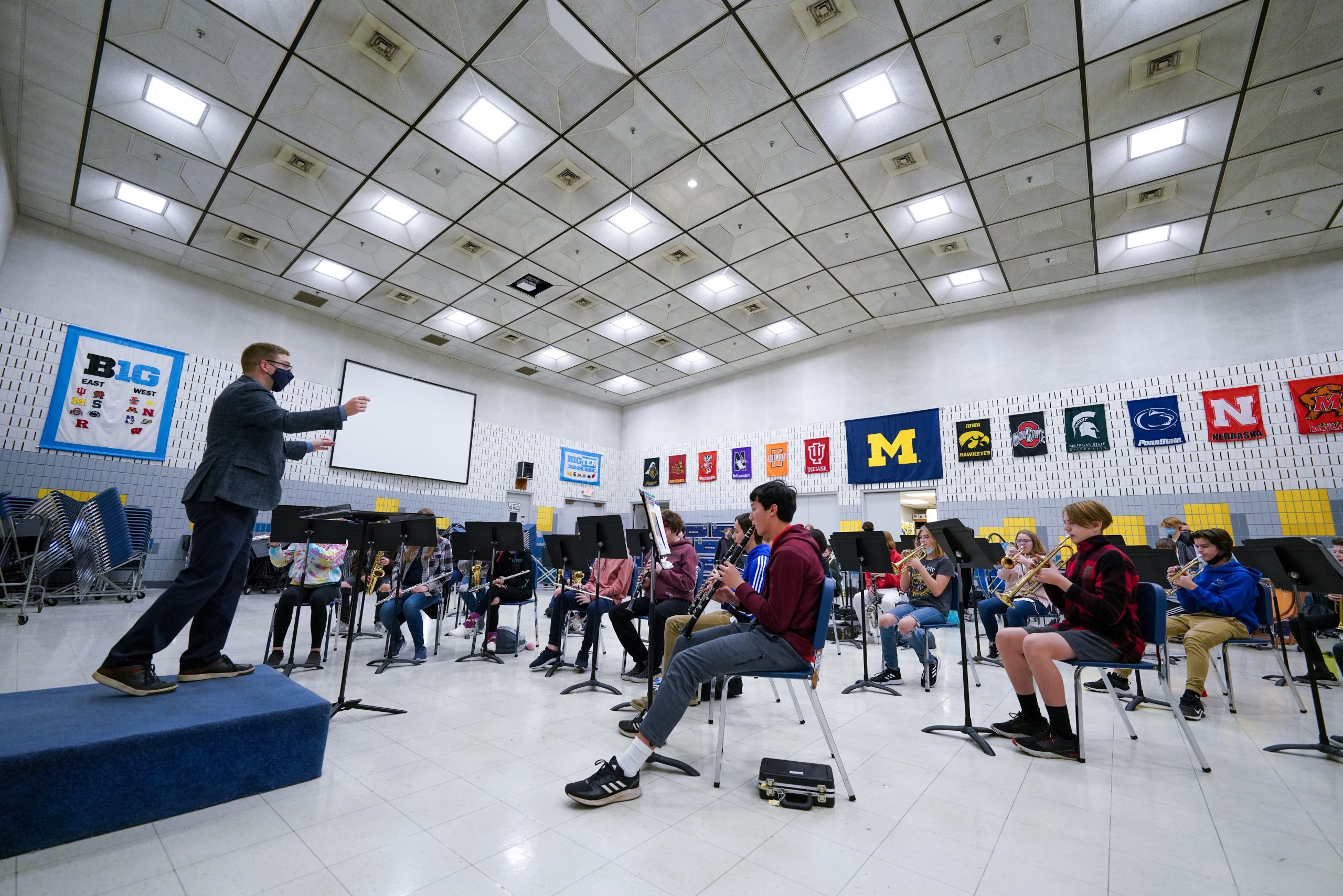 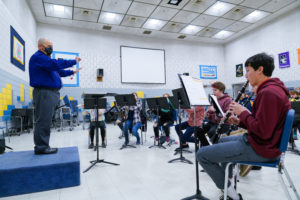 Later in the morning, Stimson took the podium, leading his students through several pieces for an upcoming concert, while Conway’s SMTD sophomores positioned themselves amongst the sections to watch them play. In his 21st year of teaching band at Parker, Stimson knows his way around a room full of 8th graders. Initially self-conscious and quiet, the students were soon laughing at Stimson’s jokes and raising their hands to respond to his queries. After playing several unfamiliar measures particularly tentatively, Stimson encouraged his students not to fear making errors. He asked them, “What’s the worst thing that could happen to us?”

“We’d die,” they responded in unison, clearly familiar with this life lesson about low-stakes mistakes. “Right,” said Stimson. “Making a mistake is no big deal. I make them daily.” They repeated the measures, not perfectly but boldly and confidently. 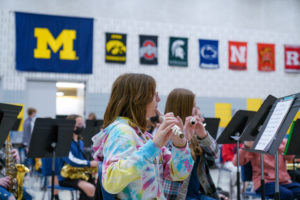 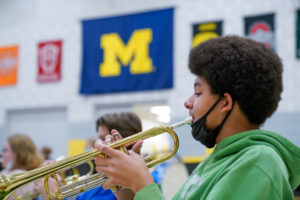 As he worked with his own students, Stimson offered advice to the SMTD students. His words of wisdom for the future music teachers could be summed up in three statements: Know your school’s community, know your students, and know yourself. He extolled the value of living in the same community where you teach, getting to know students and parents. He advised the sophomores to work hard to gain the trust and attention of their students – knowing what kind of music they listen to, for example, and treating them like young adults. And he urged them to be authentic with their students: “You have to be yourself; you can’t be someone you’re not.” 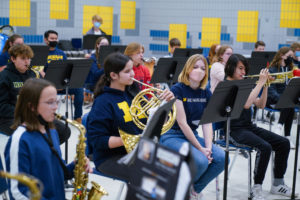 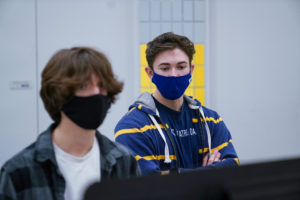 This year, Stimson has a distinct advantage with the “know your students” philosophy. His son, Jeffrey, plays trumpet in Stimson’s band class. Jeffrey hopes to one day join a marching band, just like his parents, both of whom were members of the Spartan Marching Band. When asked how his parents would feel if he marched for Michigan one day, he said, “they will just root for me and not the team.” As it happens, Conway also has a special connection with one of her students this year: her son, Tommy Hodgman, is a trombone player majoring in music education and jazz. Hodgman said of his SMTD experience so far, “It’s been just a complete blast.” And being in his mom’s class? “You’d think it would be kind of strange to have your mom be your teacher, but honestly, I think it’s the best.”

Before heading back to Howell, the middle schoolers were treated to guided tours of Revelli Hall, led by MMB members. Eighth grade saxophone player Eva Bonfiglio especially enjoyed seeing the trophy room and learning about MMB history. When asked how she felt about the experience of attending the clinic, she replied, “It was a really cool opportunity… It’s really helpful when we’re working on concert pieces especially.” 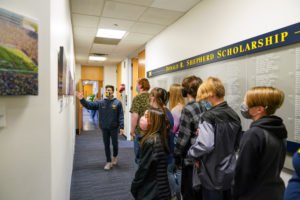 The Parker students even got a surprise visit from Walter Aguilar, MMB drum major. Welcoming the students to the home of the marching band, Aguilar explained that MMB members don’t automatically get to march on football Saturdays; each member must audition for every game. “That’s what sets us apart from every other band,” he explained, “but that’s what makes us so good, because we want to play.”

At the end of the morning, as the SMTD and Parker Middle School students gathered their belongings, Conway recalled that her son Tommy, as a 7th grade band student, had taken this very same field trip to Revelli Hall. Years later, Tommy was back – in a different role, but still, like many of the students in Revelli Hall on this November day, eager to both learn and teach. 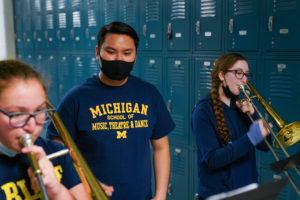 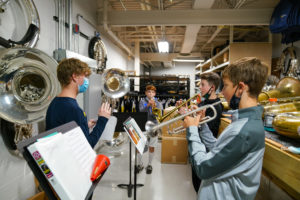 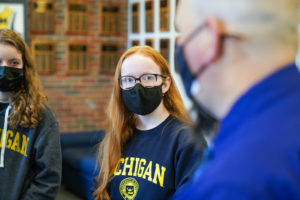 SMTD’s Department of Music Education hosts visiting middle and high school ensembles throughout the year (some including music education alumni as directors) to work with current sophomore students. Check out this video made on the occasion of another school band visit to U-M — from Stoney Creek High School in Rochester, Michigan.