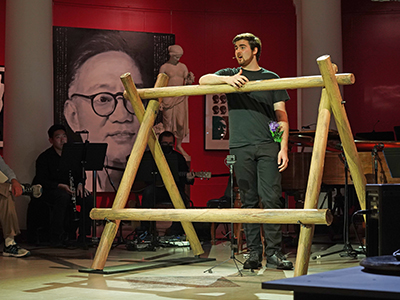 The murder of Matthew Shepard – a young, gay man tied to a fence, brutally beaten, and left for dead in October 1998 – has reverberated through the decades and far beyond the borders of Shepard’s home state of Wyoming. This savage crime, as well as the murder of a black man by white supremacists in Jasper, Texas, led to the passage of the Matthew Shepard and James Byrd Jr. Hate Crimes Prevention Act of 2009, which expanded federal hate crime legislation to include gender, sexual orientation, and gender identity, among other changes. More than 20 years later, one significant reason that Shepard’s story continues to be told is due to works of art that pay tribute to his life and mourn his death, works like Considering Matthew Shepard, a stirring three-part oratorio composed by Craig Hella Johnson. 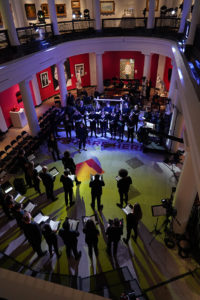 Final moments of the rehearsal before the audience’s arrival. View from the balcony of the Lizzie and Jonathan Tisch Apse at the University of Michigan Museum of Art.

In partnership with the University of Michigan Museum of Art (UMMA), the School of Music, Theatre & Dance Chamber Choir recently performed Considering Matthew Shepard in an extraordinary venue: UMMA’s Lizzie and Jonathan Tisch Apse. The performance, presented in conjunction with UMMA’s exhibition Oh honey… A queer reading of UMMA’s collection, helped mark 50 years since the founding of the Spectrum Center, U-M’s support center for LGBTQ+ students, faculty, and staff. But this event was far from just a one-night performance: as part of a collaborative effort with Michigan Media and many others across the University, the performance was filmed to ensure that it lives on and can be experienced by viewers everywhere. Together with the Penny Stamps Distinguished Speaker Series, and with additional support from the Office of the Vice President of Communications, SMTD and UMMA will present the film at a virtual event on December 10, at 8pm EST. Following the film will be a lecture presented by Craig Hella Johnson and Dr. Eugene Rogers, artistic director of the production and the director of choirs. The film will also air on Detroit Public Television on December 11 (check local listings for more information), and will be available on YouTube from the night of the premiere onward. 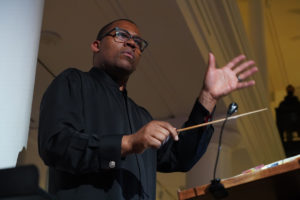 Eugene Rogers at the podium.

Performed under the direction of Rogers (MM ’01, DMA ’08, choral conducting), an award-winning conductor, as well as acclaimed stage director Matt Kunkel (BFA ’17, theatre and clarinet) and Emmy Award–winning film director and producer Bob Berg, Considering Matthew Shepard tells the story of an “ordinary boy” with a deep love for Wyoming and, at the age of twenty-one, more questions than answers about the direction his life would take. The production explores Shepard’s brief life and the impact of his death on his loved ones, on his community, and on stunned onlookers around the world.

While Considering Matthew Shepard incorporates aspects of a traditional oratorio – paying tribute to J. S. Bach, Gregorian chant, and Benjamin Britten, for instance – in many significant ways, Johnson departed from tradition to create a powerful 21st-century story. Oratorios are not typically designed to be performed with theatrical action, but this composition incorporates staging, props, performers portraying characters, and a single scenery element: 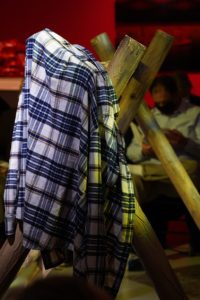 a segment of an A-frame buck-and-rail fence, representing both the prairie landscape where Shepard spent many happy hours and the site where he was savagely beaten – a site that would, after his death, become a temporary shrine to him. Performing a staged version of an oratorio may not be the norm, but for Johnson’s work, “it’s not optional,” said Rogers. “If you really want to present this in the best light, it should include staging and lighting and amplification in order to really bring out the story.” Another way this oratorio stands out is that it is, as Rogers described it, “all-encompassing stylistically,” incorporating hymnody and gospel as well as jazz, blues, pop, musical theatre, and country & western. That “big-tent” approach was no accident. “By having all of these styles of music,” Rogers pointed out, “the story is about all of us…. All of us, in our humanity, have the capacity to be any of the individuals in the story” – Shepard, his parents, and even, in some ways, the perpetrators. Its contemporary, topical nature is another feature that distinguishes Considering Matthew Shepard: “I don’t know of another oratorio that specifically deals with the life and death of an LGBTQ+ individual,” Rogers explained. 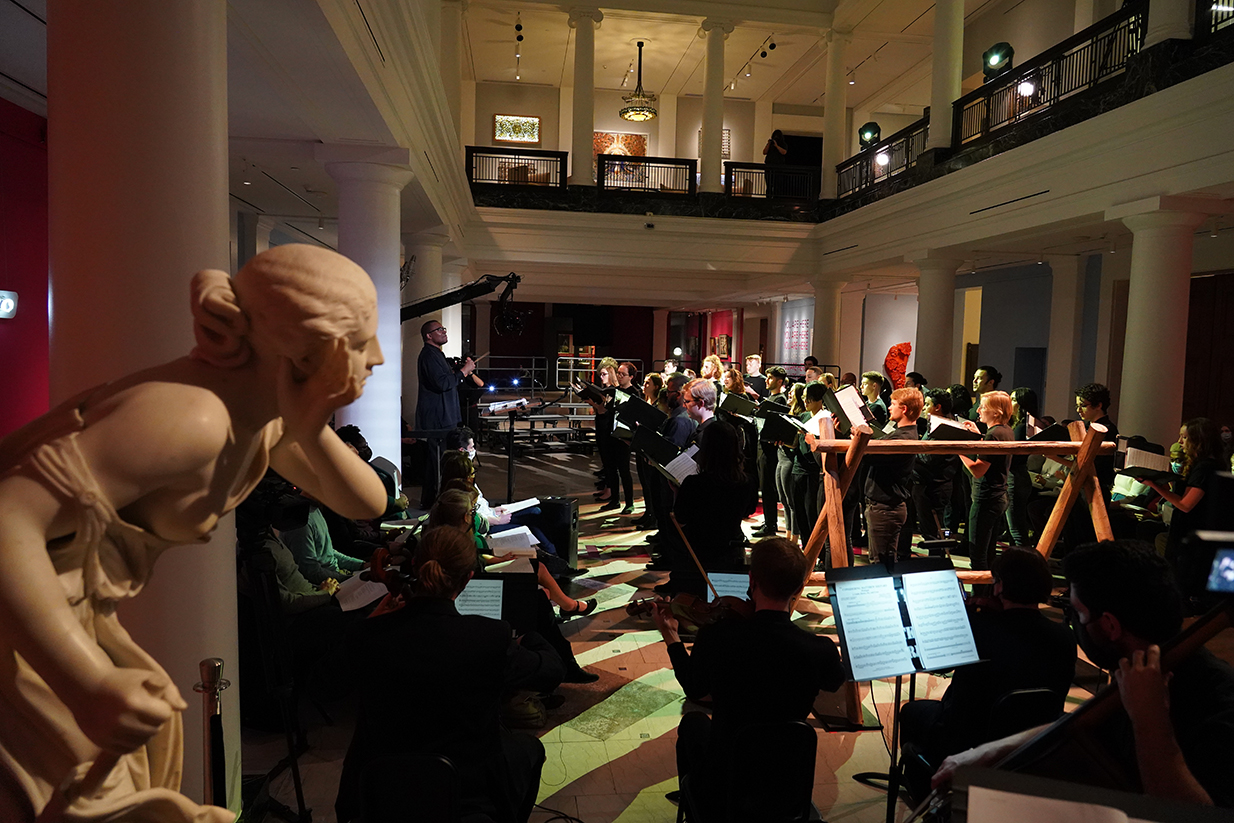 An immersive experience for performers and audience members alike.

Performing the work in the grandeur of UMMA’s Lizzie and Jonathan Tisch Apse lent a special significance to the event, with a limited number of audience members seated along two sides of the room, the musicians nestled in the semicircular space at one end, and the choir members moving from the risers at the other end throughout the open space in the center. “We felt like it needed to be in an intimate space,” said Rogers. “There’s something about being that close to everything that makes you feel all of it.” Tyrese Byrd (MM, vocal performance) praised the “gorgeous acoustic,” and Juliet Schlefer, a voice major pursuing a bachelor of music degree, echoed that sentiment: “UMMA is hands down one of the best spaces to perform in on campus. The acoustics are stunning, it feels as though your voice reverberates for miles.” The significance of performing amidst works of art, especially those in the Oh honey… exhibit, was noted by Harry Castle, a DMA candidate in composition: “It felt really poignant to be surrounded by so much queer art as we were telling this hugely important story.”

For Berg, filming a performance in an art museum posed certain challenges, but it also offered distinctive benefits. He worked closely with Lisa Borgsdorf, UMMA’s manager of public programs, and Bruce Glazier, its facilities manager. Glazier advised on keeping equipment a safe distance from the artworks, running cables in a way that kept from triggering smoke alarms, and providing power to all the equipment without blowing a circuit. “The venue is a challenge,” said Berg, “but it’s also beautiful when you see it in the context of that performance.” 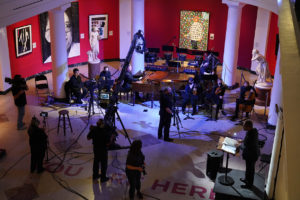 Bob Berg and his crew getting close-ups of the musicians.

The planning for the film began more than a year ago, as Rogers and Borgsdorf contended with the rapidly evolving circumstances of the COVID pandemic. Unsure whether the performance could take place before a live audience, Rogers approached Berg about filming it, and Berg readily agreed. “I’ve been around these kinds of things long enough to recognize when something is unique and an opportunity that’s going to be once in a career,” said Berg. “This is one of them.” He spent months studying the score, creating a shot list for the four camera operators so they could anticipate where they needed to be rather than reacting in the moment. He also arranged for six stationary cameras to capture footage to be added in during post-production, including multiple angles of Rogers to best capture his movements and facial expressions. “He is so emotive,” said Berg. When Rogers conducts in a typical venue, “he is only communicating to the performers,” but thanks to the position of Berg’s cameras, the film’s audience will see Rogers’s dynamic body language and emotions from heartbreak to hopefulness to joy written across his face. Grateful for the chance to create a lasting record of this performance, Berg noted, “This is phenomenal music performed by phenomenal artists…. It would have been such a disservice to not have documented the music and the performance of these kids.” 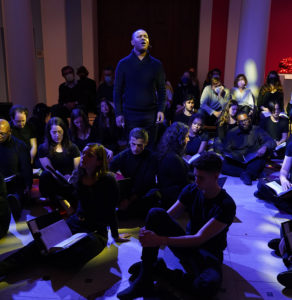 The painful nature of Shepard’s story – one that evokes the anguish of so many recent incidents of senseless violence – required a thoughtful approach, and Rogers and Kunkel sought to present the material to the students with sensitivity and a sense of context about the impact of Shepard’s murder. “You can’t just open a score and start singing,” Rogers said. Byrd, one of several soloists in the performance, acknowledged this approach: “There has to be a lot of conversation and care that goes with the learning process along with the normal notes and rhythms. I think Dr. Rogers did a great job at that.” Participating in the performance was “an emotionally charged experience” for Castle: “There are so many moments in the piece which serve as a reminder that what happened to Matthew really could happen to any one of us in the queer community.” For Schlefer, the experience was “exhausting and exhilarating, and incredibly cathartic” – a range of emotions that echo those expressed in the music itself. While it depicts a tragic event, Considering Matthew Shepard is ultimately a hopeful, and even joyous, story. As Rogers stated, “This work constantly reminds us: love and forgiveness, in the end, will win.”

DPTV’s One Detroit host Zosette Guir talked with Eugene Rogers about the filming of the U of M Chamber Choir’s performance of the oratorio Considering Matthew Shepard.