At performances of Bernarda Alba, a musical set in 1930s Spain, audiences will hear instruments they may never have heard before, weaving together to create an atmosphere distinct to the musical’s time and place. Presented by University Productions and the Department of Musical Theatre, Bernarda Alba features traditional flamenco music reflecting the show’s themes of desire, longing, jealousy, and repression.

Bernarda Alba is based on The House of Bernarda Alba, a 1936 play written by Spanish poet and playwright Federico García Lorca (1898–1936), who was executed by Fascist forces in the early months of the Spanish Civil War. Composer, lyricist, and librettist Michael John LaChiusa – known for critically acclaimed works including Marie Christine and The Wild Party – adapted Lorca’s play into a musical that premiered Off-Broadway in 2006. Both the play and the musical tell the story of the iron-willed title character attempting to control her five daughters and her elderly mother after the sudden death of her husband.

Along with more traditional instruments like clarinet, oboe, English horn, and recorder, the music will be played on instruments such as the bombard, shawm, and quena. The bombard and shawm are both double-reed wind instruments related to the modern oboe. The quena is a traditional wooden flute of the Andes. 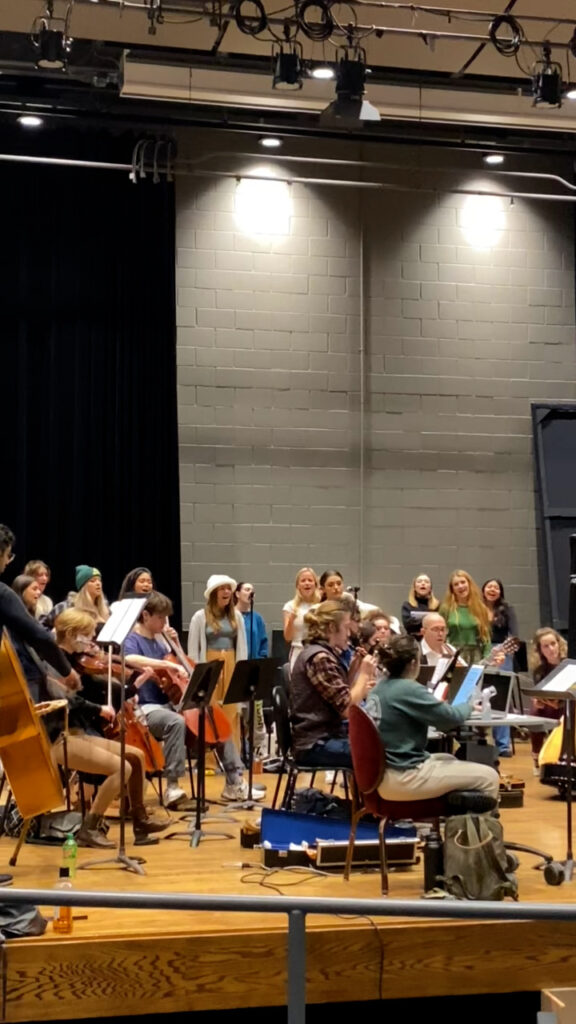 Catherine A. Walker, associate professor of musical theatre and the production’s musical director and conductor, felt it was important for the pit orchestra to play the instruments indicated in the score, rather than contemporary substitutes. For help in sourcing these instruments, she turned to Andrew Bishop, associate professor and chair of the Department of Jazz & Contemporary Improvisation. Bishop is a trusted partner of the musical theatre department, advising and often playing in productions’ pit orchestras. Bishop suggested collaborating with U-M’s Stearns Collection of Musical Instruments, which comprises over 2,500 pieces of historical and contemporary musical instruments from all over the world, and its director (and associate professor of music), Joseph Gascho. According to Gascho, this project represents the first collaboration between the Stearns Collection and the musical theatre department.

The needed instruments were all found in the Stearns Collection, though one was too fragile to be played, so Gascho acquired a new one. Having musicians actually get to play Stearns instruments fits perfectly with what Gascho sees as the mission of the collection: “The emphasis for me certainly has been finding the instruments that are playable, that are interesting to students and faculty, and getting those instruments into their hands to play,” he stated. That approach, one of valuing curiosity, is in line with the original mission of collection founder Frederick Stearns, according to Gascho: “He wasn’t excited to get the greatest violin, or get the most rare flute. He was interested in comparisons, and he wanted to know, how is an American violin different from a French, different from a German, and he wanted to have those examples presented side by side.”

Once the instruments were located, the next question to be resolved was who would play them in the pit orchestra. To find a musician who would be interested, Bishop didn’t have to go far. His son Oliver (BM ’23, clarinet) eagerly volunteered. Oliver’s mom, Kristi Bishop (MM ’00, music education), is an elementary music teacher; Oliver grew up with recorders everywhere in the house, and playing a variety of wind instruments became a part of his life. “For me, this is a most valuable learning and professional experience,” he said. “Having an interest in historical instruments and performing with wind instruments in a wide variety of settings beyond the standards, I was extremely honored to have the opportunity to explore this project in collaboration with U-M musical theatre and the Stearns Collection.” He will play the Stearns instruments as well as four different recorders and the alto flute as part of Bernarda Alba’s pit orchestra. 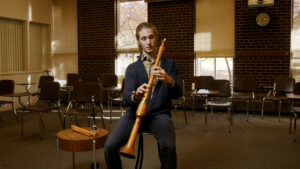 Senior Oliver Bishop with the shawm, one of the traditional instruments featured in Bernarda Alba.

For Oliver Bishop, learning to play the traditional Spanish instruments indicated in the score was certainly more difficult than simply playing instruments he is familiar with. But all involved agreed it was worth the effort. “This instrumentation adds a layer of authenticity to the production,” said Bishop, “which helps cultivate a more immersive experience for the audience.” In addition to benefits for the audience, Gascho pointed out the importance to all musicians, and especially students, of embracing versatility. “There’s something great about being awesome at one particular kind of instrument,” he said. “But honestly, there’s something just as awesome about understanding the range of instruments. That diversity positively affects you as a musician.”

The Value of Playing in Pit Orchestras

Simply playing in pit orchestras, regardless of the types of instruments, offers tremendous value to musicians, according to Andrew Bishop. “When you’re playing in pit orchestras,” he stated, “you have to play everything from the most delicate chamber music to rock and roll, jazz, old vaudeville references.” In addition to mastering a wide variety of styles, pit musicians often have to “double,” switching back and forth between multiple instruments in one production. They have to be ready for anything that happens in live performances, keeping pace with fellow musicians as well as on-stage performers. Oliver Bishop shared his perspective on the experience, stating, “I strongly believe having experience in a pit orchestra is one of the driving forces in my music education. The wide variety of stylistic and ensemble playing is unparalleled with most other professional opportunities afforded to wind players, and it has greatly improved my skills doubling on other instruments, sight reading, and consistent execution.” 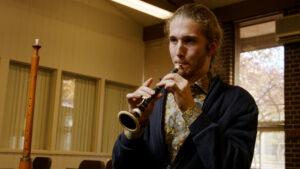 While his career has been focused on jazz and composition, Andrew Bishop has always leapt at the chance to perform in pit orchestras, something he has done for decades. “Throughout college, and a good portion of my professional life, I made a lot of my income through playing in pits,” he said, “and it not only became an important part of my income, it became an important part of my musical identity, in a way.” Since he began teaching at Michigan, he has offered to play in the pit for several musical theatre productions, and even more important, he has requested that his students be given the opportunity to do so. In addition to helping students become more versatile and adaptable, playing in pits at U-M exposes them to an array of gifted music directors. “The music directors here [at SMTD] are just incredible,” Bishop said. “That’s the other thing that I love about it, for my students, is getting to work with these world-class directors.”

Catherine Walker noted what a valuable partner Bishop has been to the musical theatre department, and how dedicated he is to giving his students enriching experiences. “He’s very committed to that,” she noted. “He always encourages us to use his students in pit orchestras when they’re available, and then he jumps in with both feet and helps, every time, to nurture that very specific skill set.” Bishop expressed that, beyond helping his students become the best musicians they can be, he has a very practical reason for encouraging them to seek out different experiences: “It is super important for jazz musicians (musicians in general, but especially jazz musicians) to be adaptable to any situation, like a Swiss Army knife. It’s a great way to expand their professional opportunities.”