Matthew Thompson, DMA joined the SMTD faculty in 2011 and was recently described by a former student as “giving one of the most wholesome, nerdy, epic-but-modest unicorn professor experiences you’ll ever find at U-M.” Dr. Thompson is active as both a pianist and a vocal coach. His pioneering pedagogy using video game music has established him as an authority in this interdisciplinary academic field.

A lifelong gamer, Dr. Thompson’s interests in game audio have become a major component of his work. Over 1000 students have taken his groundbreaking Video Game Music class. This class provided the genesis of a 2021 chapter in Teaching the Game co-authored with Karen Cook, Julianne Grasso, Dana Plank, and Ryan Thompson. In 2020, Thompson released the world premiere recording of “For the Piano”, by Halo and Destiny composer, Marty O’Donnell. Thompson has presented multiple times at the North American Conference on Video Game Music (2018): “There’s no question you’ll be popular after performing these in front of your friends!” the pedagogy and performance of piano transcriptions of video game music. Also in 2018, Dr. Thompson chaired and presented for the first ever academic ludomusicology/ sound studies track at GameSoundCon, historically an industry based conference. During the same academic year, Thompson won a grant allowing him to create the first ever collegiate studio of pianists studying video game piano. As part of this experimental year, Thompson invited Video Game Pianist, Dr. Martin Leung, to have a residency at U-M and Thompson joined Leung for Leung’s first public performance of video game piano duets. Dr. Thompson has written proactively commissioned book reviews published in the American Journal of Play and maintains a blog at videogamemusicnerd.blogspot.com. Thompson is currently writing a book about everything video game piano.

As a pianist, Dr. Thompson has performed with operatic celebrities including Thomas Hampson, Golden Mask winner Vince Yi, and musical theater gurus like Tony Award winner, Gavin Creel. Thompson’s favorite work with singers is behind the scenes as a vocal coach; in this role he’s helped prepare singers for performances both locally and at the major stages of the world, including La Scala, the Met, and the Bolshoi. For the Department of Voice, in addition to his coaching work, he has taught classes on diction, art song, audition techniques, and has been music director for opera workshop performances. Equally comfortable collaborating with instrumentalists, Thompson has performed on the Ann Arbor Symphony Chamber Music Series, the Detroit Chamber Winds and Strings Series, and the Great Lakes Chamber Music Vignette Series. He regularly plays with SMTD faculty including Nancy Ambrose King, Amy Porter, Professor Emeritus Bill Campbell, Professor Emeritus Fritz Kaenzig, and Jeffrey Lyman. He has performed with the Flint Symphony and the Michigan Philharmonic. Thompson is Artistic Director for the Carolyn Mawby Chorale, based in Flint Michigan, which was recently featured in the Netflix original series, Flint Town. Thompson can be heard in numerous live performances online from Thompson’s YouTube channel and the Carolyn Mawby Chorale’s YouTube channel. He can also be heard in a recently released recording with U-M alumnus and oboist, Dr. Alex Hayashi, Japonica, and with David Ammer, trumpet, in La trompette a renouvelé.

Dr. Thompson has been honored multiple times recently by U-M for his interdisciplinary research and teaching. In 2019, U-M created the “Thompson Prize,” an annual award for a non-SMTD student to create a multidisciplinary project under his guidance. The same year, Thompson was bestowed Associate Faculty status by the U-M Center for Japanese Studies for his research in Japanese classical and video game music. In 2020, Thompson became an ArtsEngine Faculty Liaison and was awarded a U-M Multidisciplinary FEAST research team to embark on a multi-year study of Korean Art Song 가곡 (Gagok). The team is collecting scores, translating, recording, and phoneticizing the texts, with the goal of making these songs more accessible for English speakers.

Thompson received masters and doctoral degrees from The University of Michigan in collaborative piano, studying with his long time mentor, Martin Katz. His undergraduate degree, with highest honors and highest distinction, is from The University of North Carolina at Chapel Hill where he completed an honors thesis: The Russian school of piano in America: the pedagogy of Rosina Lhevinne. Thompson’s summer training included prestigious young artist programs Song Fest, the Merola Opera Program, and Wolf Trap Opera. Summers are now typically spent teaching music to students of all levels; most recently, he has been teaching at SMTD’s MPulse Vocal Arts Institute. 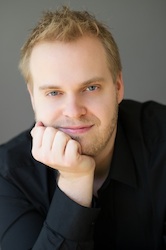