Toppin’s opera roles include: the title role in the world premiere of the opera Luyala by William Banfield, Treemonisha in Scott Joplin’s Treemonisha, Mary in William Grant Still’s Highway One, Maria in the world premiere of Joel Feigin’s opera Twelfth Night, the Queen of the Night in Mozart’s Magic Flute, Donna Anna in Mozart’s Don Giovanni, and Clara in Gershwin’s Porgy and Bess. She most recently was contracted to sing Clara in Gershwin’s Porgy and Bess for Baltimore Opera, Opera Carolina, and Piedmont Opera companies.

For Joanne Rile Artist Management, she tours in “Gershwin on Broadway” with pianist Leon Bates and Robert Sims. She has recorded seventeen compact disks of American music including Songs of Illumination (Centaur Records), More Still (Cambria), Ah love, but a day (Albany), Paul Freeman Introduces… Vol. I and II and Witness (Albany) with the Czech National Symphony, William Grant Still’s opera Highway One (Visionary Records), He’ll Bring it to Pass (Albany Records), Heart on the Wall with the Dvorak Symphony Orchestra (Albany Records), the recording for A Hall Johnson Collection published by Carl Fisher, and La Saison des Fleurs (music for soprano and fortepiano).

Recent performances include the 150th celebration of the ratification of the 13th amendment for Congress and President Obama at the U.S. Capitol; a performance in Havana, Cuba at the new U.S. Ambassador’s residence; and with the women’s orchestra and in featured recitals for Chautauqua Institute and the opening of the Smithsonian’s African American Heritage Museum.

Since 2010, she has been on the summer faculties of the Baltimore Summer Opera Workshop (Baltimore, MD), the Vocal Course for The National Conservatory (Bogota, Colombia), the Amalfi Coast Music Festival (Maiori, Italy), and the Accra Symphony Operatic Course (Accra, Ghana). She is a much sought-after clinician for colleges and universities throughout the United States.

She served on several boards including the appointments by four North Carolina Governors to the North Carolina Arts Council, NCAC Executive Board, and the African American Heritage Commission. She is the director of the non-profit organization Videmus, and the administrator for the George Shirley Vocal Competition on African American Art Music in Michigan.

Toppin was the recipient of many teaching awards, including the North Carolina Board of Governor’s Excellence in Teaching Award (the state’s highest award). She is also a recipient of the National Opera Association Legacy Award and the African American Art Song Achievement Award. Her students have won Tucker Foundation Awards and are singing at major opera companies including San Francisco, the Metropolitan Opera, Chicago Lyric, Washington National, Seattle Opera, and companies in Europe, as well as in Broadway touring productions.

Previously, Toppin was the Kappa Kappa Gamma Distinguished University Professor of Music and Chair of the Department of Music at the University of North Carolina, Chapel Hill. She joined the voice faculty of SMTD in the fall of 2017. 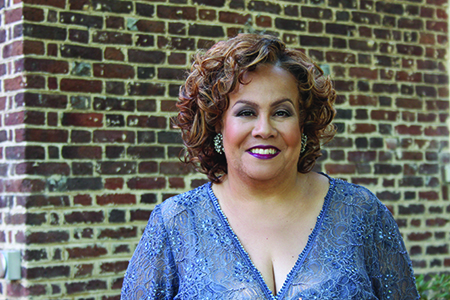