The Italian positiv organ is part of the Stearns Collection of Musical Instruments at the University of Michigan. It was restored in 1986 by Dana Hull of Ann Arbor. Ms. Hull has found evidence that the instrument was assembled in its present form in the 19th century from older components, some perhaps originating in a 16th-century Tuscan instrument. The lower portion of the case houses a multi-fold bellows pumped by a hand lever at the rear. The upper portion, containing the keyboard, windchest and pipes, may be lifted off of the base using handles at the sides.

The three stops form a mezzo ripieno of Stopped Flute 4′, Principal 2′, and 1 1/3′ and are controlled by a combination of sliders and a ventil. The keyboard consists of 45 notes with short octave in the bass (C, D, E, F, G, A-c”’). The small detachable leggio pedalboard is connected by cords to the underside of the lowest eight manual keys.

The commission of this important addition to the Organ Department’s facilities was made possible in part through a generous gift from the estate of Judith Barnett Metz and Dr. Fred L. Metz. The School of Music, Theatre & Dance has named this organ the Marilyn Mason Organ, honoring Professor Mason for her many contributions to the Organ Department and the University of Michigan. 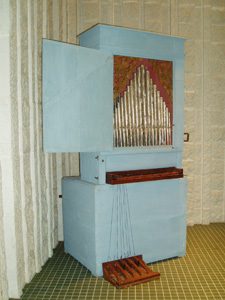