Ethel Merman, one of Broadway’s most legendary performers, got her big break when she starred in the Gershwin’s 1930 musical Girl Crazy. Read on to learn more about her incredible career, and click here to learn more about the song that started it all: “I Got Rhythm.”

Ethel Merman (1908–1984) is one of the most well-known Broadway actresses of all time. But did you know that the Gershwin’s musical Girl Crazy was the springboard for her incredible career? An article from Women’s Wear Daily, published the day after the premiere of Girl Crazy, wrote this about Ethel’s performance:

[Merman] steals the show from everyone but [Willie] Howard. It is not petty, but grand larceny. Sings with verve and jauntiness. Stops the show with “Sam and Delilah,” and “I Got Rhythm.” Her contrapuntals, when chorus takes up the jazz spiritual, evoked great enthusiasm.

Little did this writer know that Merman’s performance of “I Got Rhythm” would start her phenomenal Broadway career. This song was so monumental to Ethel’s career that she even titled one of her memoirs Who Could Ask for Anything More! 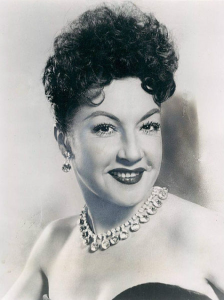 After Girl Crazy, Merman went on to star in Anything Goes (1936) and Red, Hot, and Blue (1936), to name a couple of her most recognized musicals. She is most well-known for Irving Berlin’s song, “There’s No Business Like Show Business,” from the musical Annie Get Your Gun (1946). Merman died in 1984 due to brain cancer, but her legacy lives on. Check out a video of Merman, in 1949, singing “I Got Rhythm” in the link below!