New Sounds in Rhapsody and An American in Paris 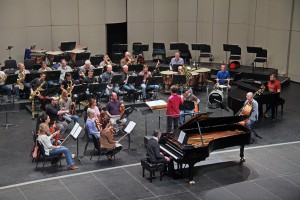 Laura Jackson leads rehearsal of Ryan Bañagale’s new edition of Rhapsody in Blue with James Winn, soloist, and members of the Reno Philharmonic.

Reno, NV—As editor-in-chief of the Gershwin Critical Edition, I’ve been in Reno this week with fellow editorial board member Ryan Bañagale (Colorado College), working with advisory board member Laura Jackson and her orchestra (the Reno Philharmonic) to test drive our new draft editions of An American in Paris (1928/29) and Rhapsody in Blue (1924, original Whiteman jazz arrangement). We’ve also joined forces with the Donald Sinta Quartet, who are featured as soloists in William Bolcom’s Concerto Grosso for Saxophone Quartet and Orchestra, but who also join the Philharmonic to perform the additional saxophone parts required by the new Gershwin editions. 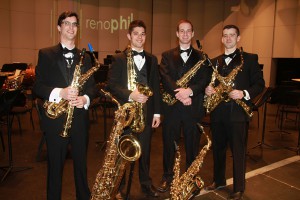 The Donald Sinta Quartet and the menagerie of instruments required for the Reno Philharmonic performances.

The saxophone is a vital catalyst in George Gershwin’s sound world, signifying both the energy of New York City and America’s Jazz Age. In the 1940s—after George’s untimely death in 1937—well intended editors simplified the saxophone writing in Gershwin’s scores to make his orchestral music both more practical and more palatable to highbrow audiences. The George and Ira Gershwin Critical Edition has restored the original saxophone parts, bringing these brassy woodwind colors back to Gershwin’s music. The original score of An American in Paris, for example, calls for three saxophonists–but these three players perform on eight different instruments. The saxophones accompany the famous blues melody, transporting our homesick “American in Paris” back home. As the blues gives way to the Charleston, the musicians pick up three soprano saxophones and, soon after, three altos. These impact the sound of the entire orchestra.

While portions of piano part to Gershwin’s Rhapsody were supposedly un-notataed or improvised at its premiere, Editor Ryan Bañagale has mined the composer’s manuscript materials to reconstruct what we believe was actually played, including some forty bars of music unheard since 1924. “These new measures recover a more angular and experimental voice of modernism in Rhapsody than we remember today,” Bañagale remarked at Sunday’s pre-concert talk. James Winn, Professor of Piano and Composition at the University of Nevada, Reno, and coincidentally a University of Michigan graduate, expertly realized the piano solo and its new measures, while Sinta Quartet members Dan Graser and Danny Hawthorne-Foss brought the remarkable sopranino / baritone saxophone duet back to life. 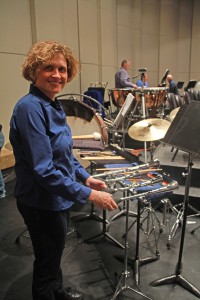 I myself have taken on the responsibility of editing An American in Paris to get a first-hand feel for what it means to edit George’s notation. Most surprising to me has been the conclusion that orchestras today have forgotten how to perform the iconic taxi horns in Gershwin’s tone poem. George marks his taxi horn notations in the percussion with the labels “A,” “B,” “C,” and “D,” but provides no explanation in the score about what these letters mean. When the composer was alive, this lack of information was not a problem because he would bring his four souvenir taxi horns purchased in Paris to each performance. Since such taxi horns were so rare in orchestral percussion sections, there was little expectation that ensembles would use the effect in concert performances, so even the early publication of George’s score contain no instructions about them. In this information vacuum, performers have assumed that the letters in the score refer to the concert pitches of the taxi horns, yet my research shows that the correct pitches are Ab, Bb, high D, and low A. These more varied tones provide for a much more dissonant and convincing image of Parisian street noise than the first four notes of an A-minor scale.

These test performances have been a huge success and I want to express my deep appreciation to the Reno Philharmonic and its musicians. We hope the new editions will be ready for release within about a year, and updates will certainly be posted to this blog as soon as we have a firm date of publication.