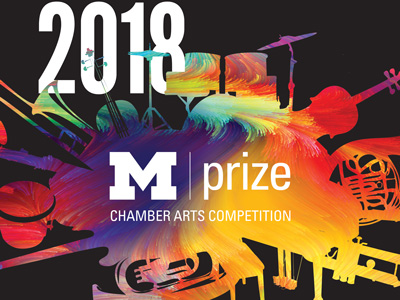 M-Prize, the international chamber arts competition with the largest prize pool in the world–$200,000+, including a $100,000 grand prize–has announced the semi-finalists who will compete in live semi-final and final rounds in their bid to win the largest chamber music prize in the world. A complete list of the competitors is now posted on the M-Prize website.

The competition takes place Thursday, May 3 through Sunday, May 6 at the University of Michigan in Ann Arbor, with semi-final and final rounds at the Earl V. Moore Building, 1100 Baits Drive.

The Grand Prize Gala Concert takes place Sunday, May 6 at 4 p.m. at Hill Auditorium and will be live-streamed by Detroit Public Television. All rounds of M-Prize and performances are free and open to the public.

The 2018 M-Prize competition will feature 33 ensembles from across the United States as well as France, Austria, The Netherlands, and the United Kingdom. The institutional representation of applicants was vast, with applications coming from ensembles trained at America’s most esteemed conservatories and performing arts schools, along with such venerable international institutions as the Conservatorium van Amsterdam and the Paris Conservatoire. Each group is vying for a semi-finalist spot in one of three categories (strings, winds, and open) in two divisions: senior (average age 35) and junior (under age 18). The “open” category can feature any instrumentation including, percussion, voice, or technology, and music that contains a significant amount of improvisation such as jazz, bluegrass, and world music.

“It is such an honor to help provide a platform for these diverse, talented ensembles who will be traveling from all over the globe to compete in Ann Arbor,” said Matt Albert, artistic director of M-Prize, chair of the SMTD Department of Chamber Music, and former founding member of Eighth Blackbird. “We’re thrilled that M-Prize allows all variety of ensembles to showcase their artistry. It provides a forum for a conversation about the impact of not only performative excellence, but also curatorial vision across the greater chamber arts field.”

During the Grand Prize Gala Concert, the $100,000 M-Prize winner will be selected from the Senior First Place Laureates in the strings, winds, and open categories. In addition to the cash award, the grand prizewinner receives performance and residency opportunities with prestigious presenters including the University Musical Society (Ann Arbor) and National Sawdust (Brooklyn) as well as recording opportunities with Azica Records (Cleveland). Additional partners include Chamber Music America, Great Lakes Performing Artist Associates, and the Interlochen Center for the Arts.

New this year, the M-Prize winner will also be offered management by Concert Artists Guild (CAG), receiving the full scope of CAG’s management services as they join the CAG roster. Since 1951, CAG has helped more than 500 young musicians launch their concert careers. CAG will also offer first place M-Prize laureate ensemble in the strings, winds or open categories automatic entry into the CAG Competition Semi-finals in mid-October of that calendar year.

“With CAG’s generous prize offer, M-Prize becomes even more valuable to our Senior first place laureates, helping many different groups advance their careers more deeply than the isolation of a single spotlight. This collaboration realizes another big step in that direction,” said Albert.

M-Prize will welcome one wildcard entry to the Senior Division: the winning ensemble from the University of Michigan’s Briggs Chamber Music Competition will be advanced to the semi-finals in the appropriate category. The website will be updated with this information after April 7th, 2018, when the Briggs winner will be announced.

M-Prize, supported by U-M’s Office of the Provost and an anonymous donor, was launched in 2016. Previous winners were the Calidore String Quartet (2016) and Russian Renaissance (2017), who represented the senior “open” category.  The goals of the competition are to provide a world-class performance and adjudication platform for chamber arts; to launch and advance the careers of chamber ensembles through prizes, visibility and professional development opportunities; and to evolve the breadth and depth of the chamber arts landscape and associated professional opportunities for exceptional ensembles.

For more information, visit the M-Prize website and join the conversation using #theMprize.