I Got Starlight: Ella Fitzgerald Sings The George and Ira Gershwin Songbook 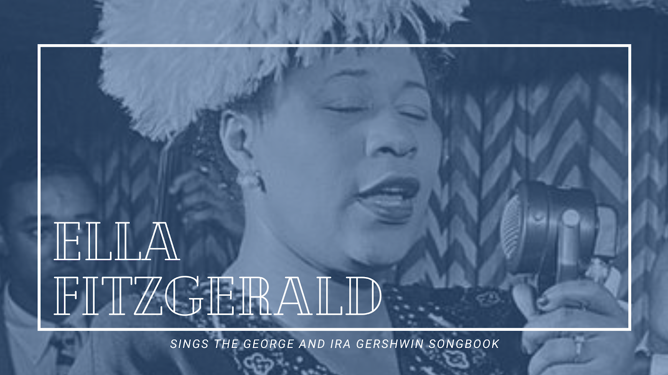 Ira Gershwin once declared, “I never knew how good our songs were until I heard Ella Fitzgerald sing them.” Indeed, the Gershwins owe much of their enduring success to vocalist Ella Fitzgerald (1917–1996), whose clear tone, seemingly effortless improvisational skills, and tremendous popularity earned her the nickname “The First Lady of Jazz.” Fitzgerald’s accessible yet powerful interpretations of the Gershwins’ music helped repopularize it over twenty years after George’s death, further cementing their compositions in the Great American Songbook.

Launched to fame by her 1938 recording “A-Tisket, A-Tasket,” Fitzgerald recorded over 200 albums during a robust, nearly 60 year-long career. She also collaborated with the likes of Dizzy Gillespie, Duke Ellington, and Louis Armstrong, and was the bandleader of her own ensemble, Ella Fitzgerald and Her Famous Orchestra. Her enormous impact on American music earned her countless accolades, including over a dozen Grammys, the National Medal of Arts, and the Presidential Medal of Freedom, as well as honorary doctorates from Yale, Dartmouth, and several other universities. 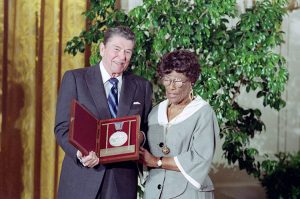 President Ronald Reagan presenting the National Medal of Arts to Ella Fitzgerald in 1987.

Between 1956 and 1964, Fitzgerald recorded eight albums known collectively as the “Ella Fitzgerald Songbooks.” Each of these albums anthologized the music of a different American composer whose work was part of the Great American Songbook—that is, the term often given to tunes by composers such as Cole Porter, Irving Berlin, Duke Ellington, and the Gershwins, who are considered to be integral to American popular music history. Fitzgerald’s songbook interpretations popularized bygone show tunes, jazz numbers, and Tin Pan Alley melodies with mainstream audiences, ultimately transforming them into songs that became part of a distinctly American musical canon—and they have remained in performance since.

One of these anthologies was Ella Fitzgerald Sings the George and Ira Gershwin Songbook, which features a wide variety of the Gershwin brothers’ songs. Backed by a studio orchestra, Fitzgerald recorded 59 tracks over an eight-month period in 1959. Check out the video below to hear Fitzgerald’s performance of “I Got Rhythm,” a unique rendition that is indicative of her essential role in the broader transformation of the Gershwins’ music from show tunes to American Songbook standards. Fitzgerald makes the familiar tune her own by incorporating scat singing, an improvisatory jazz vocal technique that uses wordless vocables to imitate instrumental riffs. Fitzgerald is especially renowned for the virtuosity she brought to this technique, originally popularized by her contemporary, jazz trumpeter and vocalist Louis Armstrong, with whom she recorded an album of selections from the Gershwins’ and Heywards’ Porgy and Bess in 1958. Although Fitzgerald described her approach as simply trying “to do what I heard the horns in the band doing,” she honed this technique for years and is now considered one of the preeminent jazz vocal improvisers. Have a listen to Fitzgerald’s iconic rendition of “I Got Rhythm,” a song that transcends its musical theatre origins in this fabulous recording.