After years as a footnote in her famous brothers’ stories, this post shines a light on Frankie Gershwin Godowsky. Learn about her accomplishments, relationships, and legacy in our latest post!

Frances “Frankie” Gershwin Godowsky (December 6, 1906 – January 18, 1999), while frequently overshadowed by her older brothers George and Ira, was herself an accomplished musician and performer deserving of recognition. From a childhood career touring with a children’s troupe to appearances in Broadway revues and Parisian clubs to an album she released at nearly 70, Frankie remained in the public eye for most of her life.

Frankie, the youngest Gershwin, was born and raised with her three older brothers in New York City. When reflecting upon their childhood together in her later years, Frankie paints a vibrant picture of the Gershwin household, in which her family frequently entertained guests with games, music, and laughter. She considered herself particularly close with George, who would always teach her the steps to the latest dances. Even when George, eight years Frankie’s senior, was away on tour or working on a musical, she remembers that he would always bring her a little gift – “a pink felt doll’s hat with a feather, a beautiful Japanese kimono.” Several home videos show the close relationship between Frankie and her second-oldest brother; they playfully sneak up on one another during downtime and relax by a pool. Frankie admitted that she was not as close to Ira, though was a “fierce admirer of his lyrics.” As for her parents, her relationships with them were similarly distant. In an interview found in An Oral History of American Music (2005), Frankie described her mother, Rose, as a very strong personality who “was interested just in what she wanted to do, and really didn’t pay much attention to any of us.” In contrast, Frankie considered her father, Morris, a “very gentle, very sweet man who was dominated by [her mother] and the whole family,” but wasn’t very close with him either. 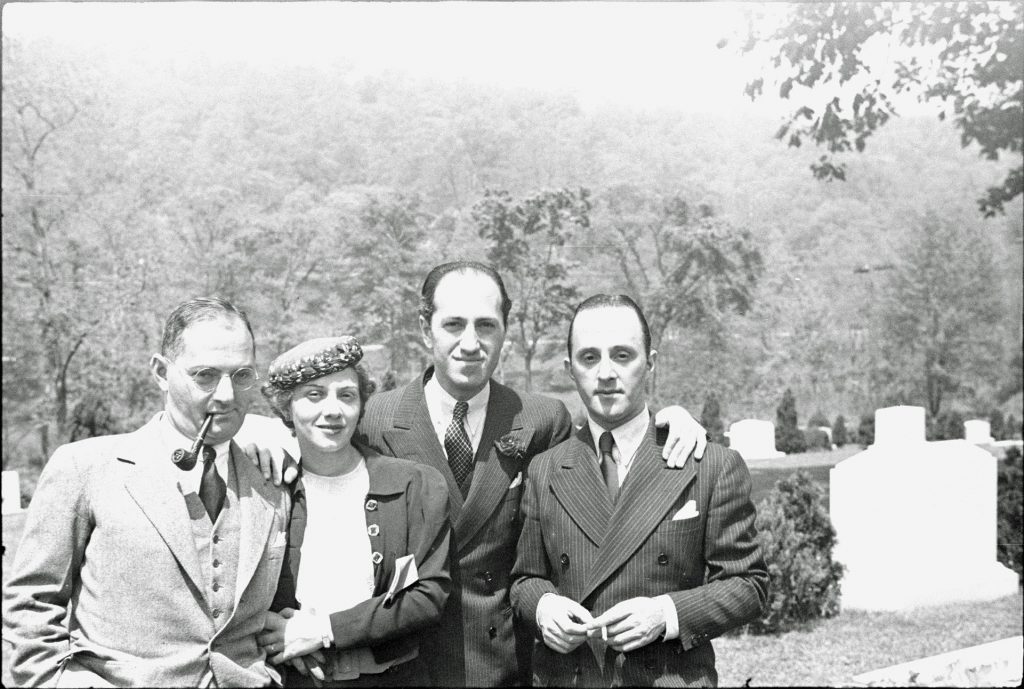 Frankie’s musical talents became apparent at an early age. George would often accompany her on the piano and encourage her to sing, pleased by her ability to carry a tune. In fact, Frankie considered herself the first in the family to take up performing for crowds; while her brother earned $15 a week playing on Tin Pan Alley, she was making upwards of $40 as a child performer. At just 11, she was already touring with a children’s troupe, Daintyland. In her early twenties, Frankie made it to Broadway. She found success in the 1927 revue Merry-Go-Round and joined Americana in 1928. Americana turned out to become somewhat a family collaboration, as George and Ira both contributed music to the revue.

In the spring of 1928, between her time with Merry-Go-Round and Americana, Frankie traveled with George and Ira to Europe and found further success as a performer. As Ira noted in his travel diary, Frankie’s performances in nightclubs made her quite popular. After being scouted by Cole Porter for a Paris nightclub review, Frankie performed several Gershwin hits—accompanied by the composer himself!— at Les Ambassadeurs. Her brother’s accompaniment was unplanned; George had insisted upon being there on her opening night in La Revue Des Ambassadeurs, and ended up joining her onstage. In a 1983 interview, Frankie opened up about her time performing in Europe:

I just enjoyed what I was doing because it was the one thing I felt that I could do to hold people’s attention. It was like a Cinderella story. From being nothing at home, suddenly to have some attention paid. It was one of the highlights of my life.

Despite Frankie’s love of performing, social expectations dictated the next steps in her life. Upon her return from Europe, Frankie began courting Leopold Godowsky Jr. Leopold was both a chemist and violinist who dreamt of one day becoming a concert artist, and the two shared a love of music. But Leopold wasn’t the wealthy suitor Frankie’s family might have expected, and their relationship stalled. Then, the young couple had a stroke of good luck; Leopold and his business partner were invited to work for the Eastman Kodak company in Rochester, New York. A speedy ceremony was planned, and the couple was married on November 2nd, 1930. Not everyone was pleased with the match, however. Frankie’s mother Rose still considered Leopold unpromising and actually “attributed her asthma to her distaste for him.” Rose’s assessment of her daughter’s husband was off, though; Leopold and his partner would go on to invent Kodachrome, a critical component in early photography technology, just a few years later in 1935. Frankie and Leopold had four children, Alexis, Leopold, Georgia, and Nadia. Today, Alexis uses her mother’s maiden name and performs Gershwin hits in clubs.

Although she retired from the Broadway stage after moving upstate with her new husband, Frankie, like George, became interested in other forms of artistic expression including painting and sculpture. But she simply couldn’t stay away from music, recording and releasing an album in 1975 titled For George and Ira. The album contained songs written and composed by her brothers, whom she truly loved—something listeners can feel through the recordings. Frankie passed away in New York City in 1999, where she had begun her bright and musically-inclined life 92 years earlier. Although the name Frances Gershwin will always be tied to the legacy of her famous older brothers, her accomplishments and capabilities as a performer in her own right, as well as her sensitive and intimate interpretations of her brothers’ music, merit more than just a footnote.