From the Archives: “Dear Mrs. Heyward: A Letter from George to DuBose’s Mother”

DuBose’s mother, Jane Heyward, ventured up to New York City after the premiere of Porgy and Bess, and George Gershwin sent a warm hello her way.

Porgy and Bess had its official premiere on September 30th in Boston and its Broadway premiere at the Alvin Theatre in New York City on October 10th. In October 1935, Jane Heyward, DuBose Heyward’s mother, left her abode in Charleston, South Carolina and traveled up to New York City with the intent of, presumably, seeing the newly premiered opera. 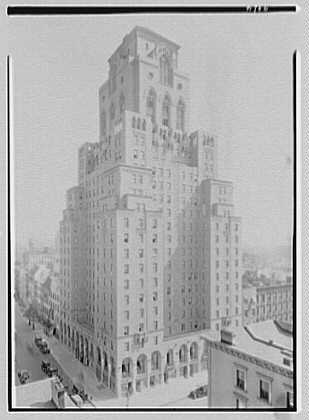 During Jane’s visit, George Gershwin sent a brief letter to her hotel room at the Barbizon-Plaza Hotel welcoming her to the city. In the letter, he wishes Mrs. Heyward a happy and healthy visit, adding that he hopes to see her during her stay in the city. True to form, charming George extends a compliment to both her and DuBose, calling Jane “a great mother of a great son.”

Jane was undoubtedly proud of her son’s accomplishments, even more so because of the hardship-heavy journey that brought her and her son to that point. In the 1860s, a young Jane Heyward lost her father just before the family’s move to Charleston, and shortly thereafter lost her sister. She was left alone to provide for her two infant children after her husband’s death in a rice mill factory accident. Jane continued to have reason to worry, as young DuBose was often ill until adulthood. The difference between the Heywards’ early life in Charleston and the success DuBose and Porgy had found in New York City certainly would not have gone unnoticed during Mrs. Heyward’s trip.

Like her son, Jane had an interest in Southern blacks’ dialects and lifestyles. Even before DuBose’s success with Porgy, she had been an avid researcher of the Charleston culture, including local customs, lore, and dialects (Hutchisson 4-8). She often gave lectures to visiting tourists in Charleston regarding tales of the “Gullah Negroes” in Charleston (Alpert 37). DuBose’s interest in Southern black culture of the early 20th century was perhaps, then, no coincidence—like mother like son, DuBose!

It was most sweet of you to write me a letter as you did. I appreciate your warm feelings and your kind interest very much. You are indeed a great mother of a great son.

I hope to see you while you are in New York and I will arrange with DuBose to bring you up to my apartment.

Hoping you are in the best of health and that you have a most happy visit,