On Wednesday, January 29, attend a FREE concert at Hill Auditorium featuring a night of dance-inspired music by George Gershwin and Sergei Rachmaninoff, performed by the University Symphony Orchestra.

Cuban Overture was composed by George Gershwin in 1932 after a trip to Havana. He was inspired by the Caribbean percussion instruments and rhythms he encountered there, and went as far as bringing a set of Cuban musical instruments back to New York. The resulting work was a short and exciting impressionistic piece originally entitled Rhumba.

The program concludes with Sergei Rachmaninoff’s Symphonic Dances, an orchestral suite which complements the energy and color of the Gershwin pieces with its own mix of lush melodies, moving harmonies, and energetic rhythms, with motifs derived from Russian church music. Completed in 1940, this was Rachmaninoff’s last major composition.

The concert is preceded by a lecture in the main lobby.

The Gershwins’ Porgy and Bess: The MET Live in HD

On Saturday, February 1 at 12:55pm, experience The Gershwins’ Porgy and Bess: The MET Live in HD at Michigan Theater, in community partnership with The Gershwin Initiative at U-M SMTD.

George Gershwin’s famous 1935 opera, having returned to the Metropolitan Opera’s stage for their 2019–20 season, will be broadcast live from New York to the Michigan Theater’s historic main auditorium. This season is notable for its use of the Gershwin Initiative’s new performing edition of The Gershwins’ Porgy and Bess, edited by Wayne Shirley.

Porgy and Bess is one of the most iconic American operas. Set in the fictional African American fishing community of Catfish Row, the title characters struggle to find peace in each others’ love against a backdrop of violence, grief, poverty, and addiction. Bass-baritone Eric Owens and soprano Angel Blue star in the roles of Porgy and Bess.

After the performance, there will be a special Q&A panel with Professors Naomi André and Daniel Washington, moderated by Gershwin Initiative managing editor Dr. Jessica Getman. 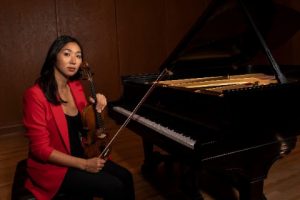 Following the September release of her album My Time Is Now—the first recording to make use of George Gershwin’s recently restored piano at the University of Michigan—violinist and New York City-based alumna Haerim Elizabeth Lee will perform with pianist Alex Brown at Britton Recital Hall Oct. 28.

Lee had just begun her D.M.A. when she attended the Gershwin Initiative’s inaugural concert at U-M in 2013, which featured a performance on Gershwin’s personal Steinway from his New York apartment. Drawn to the sonority and sweetness of the instrument, Lee knew immediately that she wanted to create and record music with it.

The Gershwin piano was gifted to the U-M School of Music, Theatre & Dance as part of the launch of the U-M Gershwin Initiative, an effort dedicated to creating a new and complete critical edition of the Gershwins’ work.

The title of Lee’s project is taken from a George Gershwin quote that has inspired her approach to music: “My people are American, my time is today. Music must repeat the thought and aspirations of the times.” These words led Lee to look beyond the classical genre to draw influence from world music, jazz and from everyday contemporary life.

Grammy-nominated pianist Brown, who plays Gershwin’s Steinway on “My Time is Now,” is a classically trained jazz musician, which was important to Lee as part of her goal to push the boundaries of classical music. She specifically wanted a pianist who could improvise in his work as Gershwin had done.

Though Gershwin never wrote music for the violin, Lee and Brown made use of existing arrangements while crafting new arrangements for melodies that Gershwin had written but never finished. “My Time is Now” also features the first arrangement of “Embraceable You,” one of Gershwin’s most famous tunes, for violin and piano.

Lee considers the opportunity to work with Gershwin’s Steinway a great privilege and recognizes the instrument as another artistic collaborator.

“Just as my violin influences the way I perform, there’s no way that Gershwin was not inspired by the sound of his own piano and what would sound good on that piano,” she said. “You’re really capturing the sound he would have heard and the way he would play a passage, and just play with the sound.”

Now based in New York, Lee is looking forward to returning to Ann Arbor for the performance. Acknowledging the support of the U-M School of Music, Theatre & Dance and the Gershwin Initiative, as well as her professors and fellow students, she called the album “a labor of love from the entire school.”

“It’s my way of returning the inspiration. It is my hope that, just as I was inspired by my classmates and professors, I can pay it forward to the community in Ann Arbor,” Lee said. “I’m hoping that through the music and through my story—not to sound cheesy—but that people can take a moment to really appreciate what you have here, because you never know what’s going to inspire you.”

Haerim Elizabeth Lee
Recital: “My Time Is Now”: Violin Music By and Inspired By the Gershwins

Sponsored by Michael Di Pietro and Alice Fishman on behalf of the Jewish Community Center of Greater Ann Arbor’s Book and Arts Festival, the Gershwin Initiative organizes a 90-minute lecture recital about the discoveries of the George and Ira Gershwin Critical Edition, featuring student talent from SMTD’s jazz, piano, strings, voice, and winds and percussion departments.

David Charles Abell has had an extraordinarily successful and diverse career in classical music, opera, film music, and musical theater. He has conducted many of the top British orchestras, including the London Symphony, the London Philharmonic, the Royal Philharmonic, and the Bournemouth Symphony. His 2014 critical edition of Cole Porter’s Kiss Me, Kate is a landmark scholarly volume on musical theater, and he is immersed in the works of George and Ira Gershwin.

Panel discussion about the new critical editions of George Gershwin’s An American in Paris and Concerto in F with Mark Clague, editor-in-chief of the George and Ira Gershwin Critical Edition and faculty members Kenneth Kiesler (conducting) and Logan Skelton (piano soloist), plus Timothy Freeze (editor of Concerto in F), and Kristen Clough (French music scholar). This panel discussion is in conjunction with the University Symphony Orchestra’s Gershwin’s performance on Friday, September 23. Free – no tickets required

Pre-concert lecture at 7:15PM in the lower lobby.
Kenneth Kiesler, conductor, Logan Skelton, piano, Timothy McAllister, alto saxophone
The University Symphony Orchestra, conducted by its music director, Kenneth Kiesler, opens its 2016-17 season with music by two of America’s major composers: George Gershwin and John Adams. These will be the first performances of the new critical editions of Gershwin’s Piano Concerto in F, with soloist Logan Skelton, and An American in Paris. The concert also includes John Adams’s The Chairman Dances and Saxophone Concerto, with soloist Tim McAllister, who has performed the piece many times, including the world premiere with the composer conducting.

James Kendrick, music publishing executive, offers a primer to the world of copyright, performance rights, rental income, and commissioning for performers and creators. Learn the vital tools of making a living in music with one of the leading international experts in music publishing today.

Tuesday, October 6, 2015
Earl V. Moore Building, Glenn E. Watkins Lecture Hall
7:00 PM
Prostitution in the U.S. between 1840-1917 was big business. Tens of thousands of brothels, concert saloons, and dance halls across the nation—all common sites for prostitution—featured regular, full-time professional music-making for dancing, and thus provided a well-paid livelihood for working musicians. This project explores the nexus between prostitution, music-making, dance, sexuality, an underground cultural economy, and the development of musical foundations upon which an extraordinarily vital 20th-century American popular music was built.

Sponsored by the American Music Institute and U-M Gershwin Initiative.

Friday, October 10, 2014
Hill Auditorium
8:30 PM
SMTD faculty and students collaborate in a multidisciplinary artistic celebration to dedicate George Gershwin’s newly refurbished Steinway grand. The instrument was donated to the University by Marc George Gershwin as part of the U-M Gershwin Initiative and its George and Ira Gershwin Critical Edition.
Free – no tickets required

The Legacy of Song: George and Ira Gershwin Panel Discussion