“Raggedy Ann: the Star of ‘Someone to Watch Over Me’” 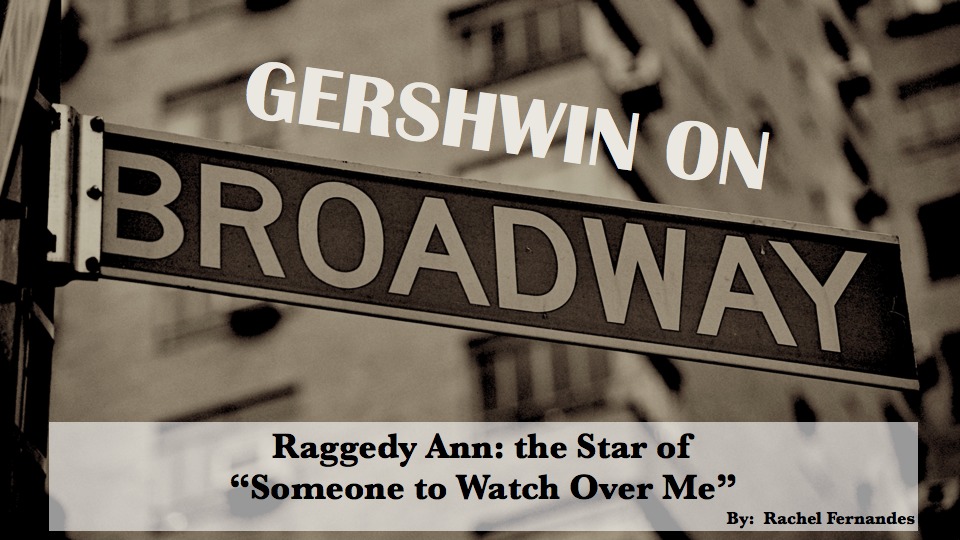 “Someone to Watch Over Me” is one of George and Ira’s most beloved pieces. Many artists perform it as a love song—but few people know that when it was first performed, it was sung to a Raggedy Ann Doll.

“Someone to Watch Over Me” is one of the Gershwins’ most iconic songs, written by Ira for his wife Leonore in commemoration of their marriage on September 14, 1926. The song made its Broadway debut in the smash hit musical Oh, Kay! (1926). Oh, Kay! is a love story about lady’s man Jimmy Winters who is engaged to the serious, overbearing Constance but falls for Englishwoman Lady Kay. The musical featured Victor Moore as Jimmy and Gertrude Lawrence as Kay. Even though the show as a whole was wildly popular, Gertrude Lawrence’s rendition of “Someone to Watch Over Me” was the show’s big hit.

As with many of the Gershwins’ other songs, George had originally composed the music as “another dance-and-ensemble number” for the show Oh Kay!  Then one day, George started to play the piece at a slower tempo and, according to Ira, “both of [us] had the same reaction: this was really no rhythm tune but rather a wistful and warm one.” This tempo change not only enhanced Ira’s sentimental lyrics but also brought out a feeling of vulnerability and safety that was missing at the faster initial tempo (To learn more about tempo and the Gershwins, click here).

George and Ira had some difficulty fitting “Someone to Watch Over Me” into the plot of Oh, Kay! In his article “Oh, Kay! Is More Than Okay,” Peter Filichia describes how the Gershwin brothers had originally put this song in Act I but decided that Gertrude Lawrence’s character, Kay, wouldn’t be close enough to any other character at this point in the musical to be pouring out her heart. When they moved it to the end of Act II, they realized that their leading lady wouldn’t have been seen until then. Eventually, George bought a Raggedy Ann doll and found it fitting that she should express her feelings to the doll at the beginning of Act II. The scene begins with Kay realizing that she loves the protagonist Jimmy and that it is a mistake for him to marry his annoying fiancée Constance. So center stage, alone with the doll, she sings “Someone to Watch Over Me.” 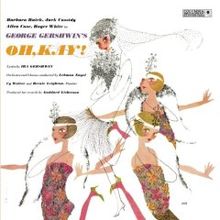 Before the opening night of Oh, Kay!, George gifted Lawrence with a Raggedy Ann doll and suggested she use it in the number. This doll, though quite common today, was then newly marketed. His hope was that her vulnerability and need for someone would be intensified if she were alone on center stage singing to a doll. Using a doll as the object of Kay’s affection at this point in the production was a gamble on George’s part, but Lawrence got incredible reviews; Percy Hammond of the New York Herald Tribune claimed that it “wrung the withers of even the most hard-hearted.”

A decade after Oh, Kay!’s 256 performances on Broadway, George discussed “Someone to Watch Over Me” on his 1934 radio show, Music by Gershwin, primarily addressing how the Raggedy Ann doll became such an integral part of the song:

“It was all very wistful and on the opening night, somewhat to the surprise of the management, Miss Lawrence sang the song to a doll. This doll was a strange looking object I found in a Philadelphia toy store and gave to Miss Lawrence with the suggestion that she use it in the number. The doll stayed in the show for the entire run. I don’t know where he is now but I hope he’s in comfortable circumstances, for he certainly did his part well.”

The last-minute addition of the doll brought an innocence to the piece, transforming Lawrence into a damsel longing for “someone to watch over [her].” Sometimes the simplest alterations can bring out the biggest changes, and in the case of “Someone to Watch Over Me,” it was for the better.

When first composing this piece, the Gershwin brothers tried to capture the feeling of safety (and love) that everybody longs to have. The addition of the doll only enhanced the childlike, vulnerable side of the song that was being hinted at in lyrics such as, “I’m a little lamb who’s lost in the woods.” Since Lawrence’s performance, many artists including Ella Fitzgerald, Frank Sinatra, Amy Winehouse, and Elton John have recorded “Someone to Watch Over Me.” Although many artists sing this like a love song, its first performance, directed at a doll, gave the piece an aura of safety not usually present in romantic songs. Lawrence’s vulnerability in Oh, Kay! was palpable, which makes her performance so iconic and may be one of the biggest reasons why “Someone to Watch Over Me” has turned into such a hit.

For More Recordings of This Song, See the Following Links: