Farewells, Photographs, and Affections: A letter from Ira to DuBose

After George Gershwin’s death, Ira writes a letter to DuBose Heyward passing along his and George’s respect and affection for the author.  Take a look at Ira’s letter of August 2, 1937, to DuBose, held at the South Carolina Historical Society.

By the middle of 1937, just shy of two years after the premiere of Porgy and Bess, George Gershwin’s growing brain tumor, undetected at the time, was causing him severe headaches and fainting spells. On July 11, after having fallen into a coma two days before, George underwent extensive brain surgery—but the 38-year-old composer passed away just hours after the operation was complete.

Ira sent a letter to DuBose Heyward two weeks after George’s death, expressing both his late brother’s and his own affection for DuBose. In the letter dated August 2, 1937, Ira calls their time working on Porgy and Bess an “exciting and thrilling period” and assures DuBose that George highly respected and admired his contributions to the opera.

Although Ira and DuBose’s supportive and collaborative lyrical work contributed to Porgy and Bess’s ultimate success, their collaboration wasn’t initially planned. George and DuBose’s early correspondence seemed to indicate that the two were having trouble understanding each other’s visions. DuBose would send George pieces of the libretto or song lyrics only to have George reply with questions about how DuBose envisioned the words to be presented, even asking DuBose if he could add “dots and dashes” above the words to help George get a better grasp of what DuBose wanted (Gershwin to DuBose, letter, March 8th, 1934).*  It was only when Ira got involved that George’s music and DuBose’s libretto seemed to come together.

In his letter to DuBose, Ira goes on to mention a mysterious silver tankard he thought DuBose might want, as well as the famous, signed photograph of the three at the piano, taken while they worked on the opera in Boston. It was copied, independently signed three times, and gifted to each other (George’s copy is pictured below). DuBose’s short note on Ira’s signed copy of the photograph affectionately refers to Ira as his “lyric twin”(Pollack 604j). Even then, in the fall of 1935, it was clear DuBose and Ira had great admiration for each other and considered it an honor to collaborate on the opera’s lyrics. George, too, deeply valued his relationship with DuBose, even reaching out to him in early 1937 with the hope of collaborating on another opera (Wyatt and Johnson 241). 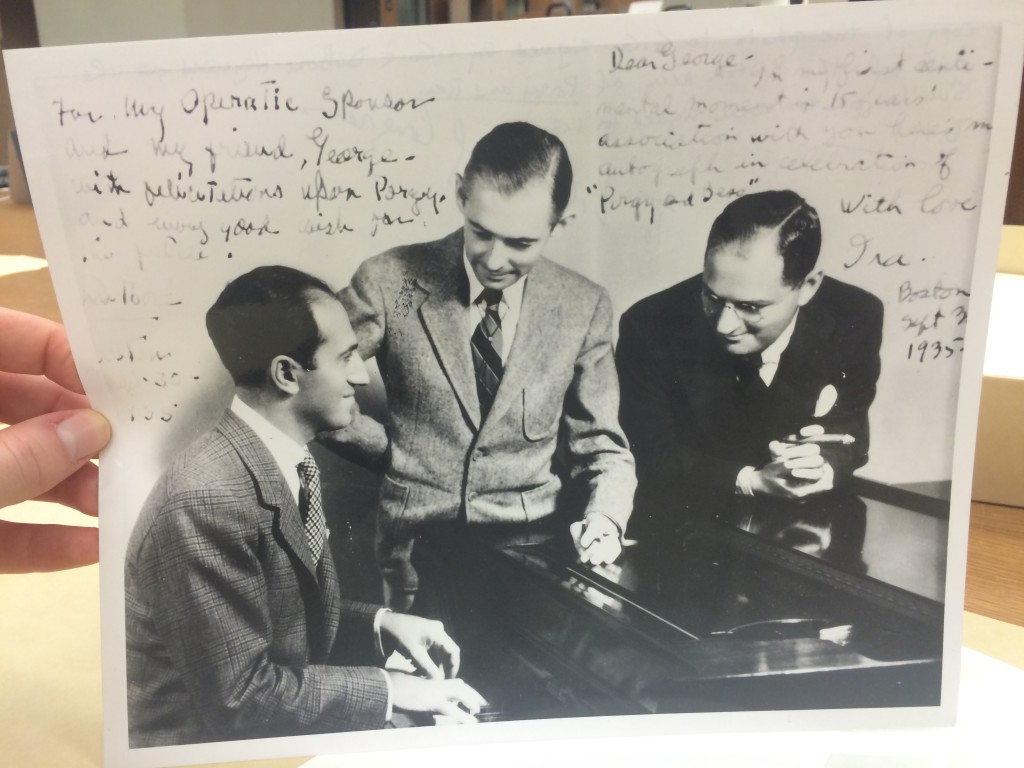 Signed photograph of George, Ira and DuBose: courtesy of the George and Ira Gershwin Collection at the Library of Congress. Posted with permission of the Gershwin Estates.  Photograph by Frances Sobolak on August 22, 2016. Signatures read:  Left, “For my Operatic Sponsor, and my friend George, with felicitations upon Porgy and every good wish for the future. Dubose.  Boston, Sept 30, 1935.  Right, “Dear George, in my first sentimental moment in 15 years’ association with you here’s my autograph in celebration of “Porgy and Bess”.  With love, Ira, Boston Sept 3[0], 1935.”

To the end of my days I shall never forget the exciting and thrilling period of “Porgy and Bess.” George had, not only a great respect for you, but also a deep affection, and I assure you, though I believe you must have known, I felt the same way about you and considered it a great honor to be associated with you, however small my contribution.

The photograph of the three of us at the piano, which we all signed, happens to be the only one I ever requested of anyone and, of course, is nearer and dearer to me now than ever.

The silver tankard is in the warehouse along with most of his manuscripts and other possessions. When the estate gets around to these, I’m sure my mother will need no convincing that the tankard go to you.

I hope your health is good and that we see each other in the not too far off future.

Frances Sobolak is an undergraduate student at the University of Michigan pursuing a Linguistics major and Music minor. She joined the Gershwin Initiative team in the fall of her sophomore year through the university’s undergraduate research opportunity program.

*Look for this letter to be shared in March 2017 as part of this series!

This letter from Ira Gershwin to DuBose Heyward was obtained from: