Doin’ Time: The Coast to Coast Transformation of “Summertime” 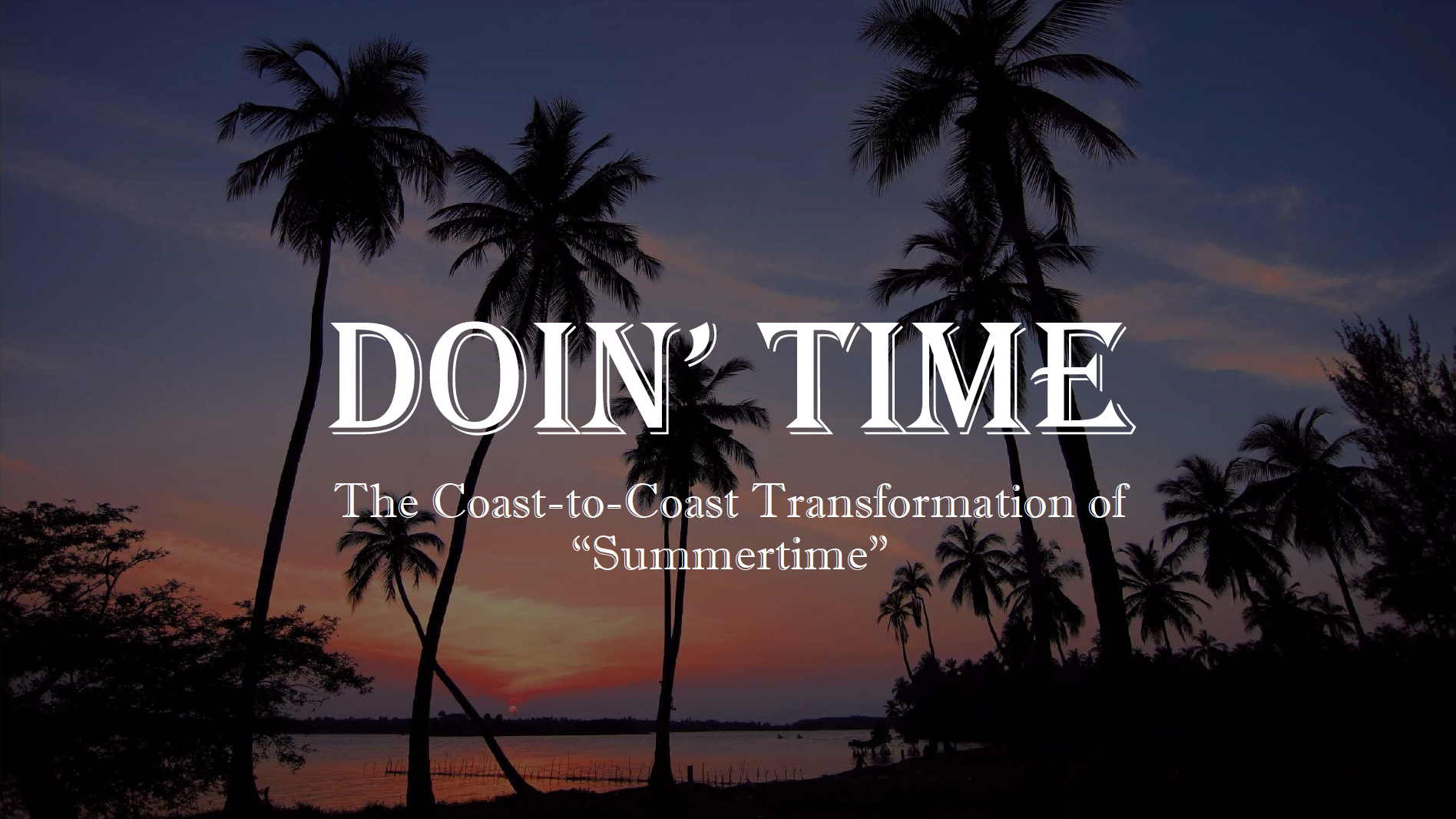 Between the Metropolitan Opera’s new production and Lana Del Rey’s recent song “Doin’ Time,” we’re hearing about Porgy and Bess everywhere these days. But how did “Summertime” end up on Top 40 radio? This post explores the rich afterlife of Gershwin’s famous aria, from early recordings to Sublime’s ska-punk interpretation, and its most recent appearance in pop star Lana Del Rey’s sixth album.

The aria “Summertime” from the American opera Porgy and Bess (1935) is perhaps composer George Gershwin’s most recognizable tune—so ubiquitous, in fact, that it has been reworked into a SoCal pop anthem. But how did “Summertime” find its way off the East Coast operatic stage and into a 2019 music video depicting indie pop singer Lana Del Rey as a giantess wandering Venice Beach? To understand how we got here, we first need to look at the various forms “Summertime” has taken since its premiere. From early jazz recordings in the 1930s, bossa nova and English psychedelic rock in the 1960s, to ska-punk in the 1990s, Gershwin’s composition has been reinterpreted by countless artists. When examined in the context of these older recordings, Del Rey’s 2019 song—though vastly different from the original aria—reflects a long tradition of reinterpretation, and just one example of the many ways “Summertime” has been transformed since its premiere.

The slow, bluesy strains of “Summertime” open Act I of Porgy and Bess. Muted strings swell and fade like waves as Clara sings this gentle lullaby to her infant son. An aria modeled after an African American spiritual, the tune quickly found a life outside of the opera as a jazz standard. Many artists recorded their own covers of “Summertime”; Billie Holiday’s 1936 rendition, released just a year after the opera’s premiere, quickly hit the US Billboard top charts, bringing “Summertime” off the stage and into the popular music realm. Big bands such as Duke Ellington and His Orchestra followed, opting in 1956 to perform it at a more moderate swing tempo. Louis Armstrong and Ella Fitzgerald’s 1958 album Porgy and Bess reinterprets the solo aria as a duet, with Armstrong both playing his trumpet and singing in a dialogue with Fitzgerald. In his 1959 recording, Miles Davis arranges “Summertime” for trumpet, and he improvises on the melody over a walking bass line. Though these are among the most famous, over 25,000 recordings and arrangements of “Summertime” have been made since the opera’s premiere, with each artist taking a distinct musical approach.

By the 1960s, “Summertime” found its way outside of the jazz world and into other, perhaps more unexpected genres. The Zombies, an English rock band, released a stripped-down cover of “Summertime” in their eponymous 1964 debut EP. This version stayed fairly true to the original, with a guitar imitating the opera’s string swells at a driving tempo and only minor alterations to the lyrics. This version’s greatest impact, however, was not its musical innovation, but rather the entrance of “Summertime” into the rock music scene. Like fellow British Invasion groups The Beatles and The Kinks, The Zombies toured in the U.S. in the 1960s and saw great international success. As they garnered a wider audience, songs like their Gershwin cover became increasingly popular in the U.S. Along with the other U.K. bands, The Zombies helped define 1960s rock, and Gershwin’s music further cemented its place in the ever-evolving popular music sphere.

Thirty years after The Zombies’ cover, another artist took a new approach to “Summertime.” Ska-punk band Sublime, a ’90s group from Long Beach, California who drew heavily on a wide variety of genres, including hip hop, punk rock, and reggae, looked back to the 1960s for inspiration. Sublime took a liking to an improvised, bossa nova rendition of Gershwin’s aria on jazz flutist Herbie Mann’s 1961 live album, Herbie Mann at the Village Gate. They sampled Mann’s track, mixed the flute melody with drums, and then recorded half-sung, half-rapped vocals over the track. Featuring elements such as record scratches and vocal growls, the song is unmistakably modern in its experimentation and use of technology. Sublime titled their Mann-inspired work “Doin’ Time,” which tells the story of a cheating lover whose treatment makes the singer feel imprisoned (“doin’ time”). Though the lyrics differ from librettist DuBose Heyward’s original text, the first line of the aria is kept relatively intact, as Sublime sings “Doin’ time, and the living’s easy” to the same melody heard in Gershwin’s “Summertime.” 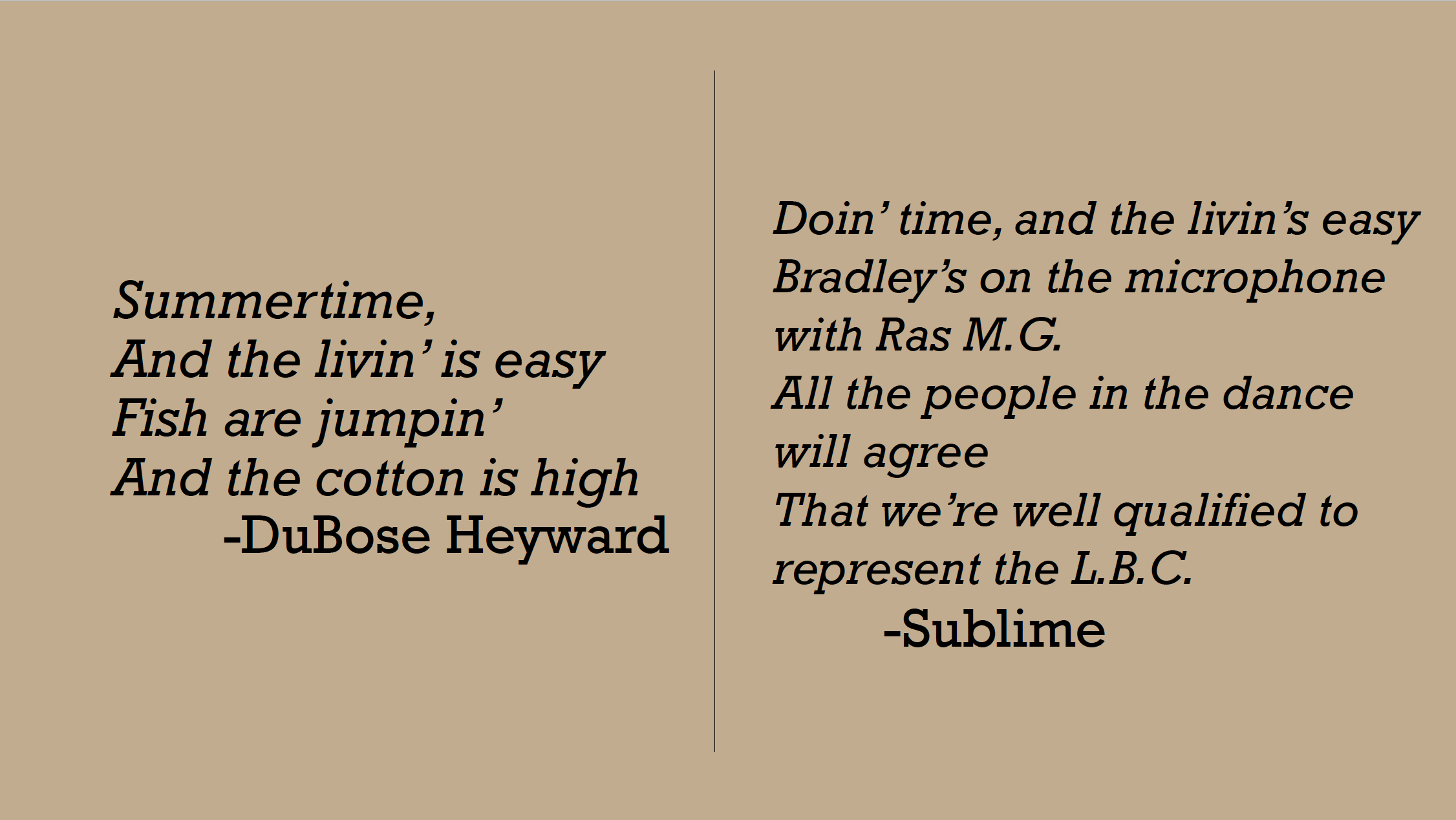 When attempting to release their song, Sublime encountered a legal challenge—they could not sample Mann’s Gershwin cover unless they changed the lyric “Doin’ time” to “Summertime,” just as in Heyward’s original. This problem was further complicated by the fact that Sublime’s lead singer, Bradley Nowell, had died of a heroin overdose after the song had been recorded with the “Doin’ time” lyric. Sublime’s producer Michael Happoldt took the reins and recorded himself singing “Summertime.” The group inserted this sound byte into the recording in place of “Doin’ time” and was finally able to release their song on November 25, 1997. Despite its difficult genesis, “Doin’ Time” was a hit and charted at 87 on the 1997-98 US Billboard Hot 100.

Over twenty years later, yet another artist reinvented Sublime’s cover of Gershwin’s tune. In May 2019, Lana Del Rey, an indie pop singer, released a cover of “Doin Time” as a single from her sixth studio album, Norman F**king Rockwell! Recorded for an upcoming documentary on Sublime, the song came as a surprise to some fans—what connection could Del Rey possibly have to a ska-punk band? Though the two artists differ in genre, they both occupy a similar soundscape. Despite being born and raised in New York, Del Rey’s romantic, dreamy sound has distinct ties to Southern California, with many critics referring to her style as “Hollywood sadcore.” Del Rey believes that Sublime embodied the SoCal sound, and in a statement that accompanied the release of her song she cites them as a major influence on her style: “Not a day goes by that I don’t listen to at least one Sublime song. They epitomized the SoCal vibe and made a genre and sound totally their own.” While inspired by Sublime, Del Rey’s cover is undeniably hers. Her version sounds smoother and lusher, as she brings out the bossa nova elements of the Herbie Mann sample and croons the originally rapped lyrics. The song’s journey to California also suggests parallels between Del Rey’s life and that of George Gershwin. Both artists grew up in New York and moved to Los Angeles—Del Rey towards the beginning of her career and Gershwin in the last few years of his life.

When Gershwin died in 1937, no one could have predicted the vast breadth of his musical reach. Though new productions of Porgy and Bess carry on the Gershwin tradition, these are just one small aspect of his legacy. His music persists as vibrantly off the stage as on, perpetuated through American popular music in genres that had yet to exist during his lifetime. And as Gershwin lived his final years in Southern California, perhaps it is fitting that his music has found a new home there. From jazz to ska-punk to Hollywood sadcore, the endurance of “Summertime” is a testament to the timelessness and malleability of Gershwin’s compositions—and we can’t wait to discover what forms these tunes will take next.