Testing Rhapsody in Blue and An American in Paris – Laura Jackson

On February 21 and 23, the Reno Philharmonic gave a test performance of our current drafts for Rhapsody in Blue and An American in Paris. The response from the orchestra and the audience was fantastic, the performance a success, and our editor-in-chief Mark Clague was able to explore his suspicions about the taxi horn pitches in An American in Paris (see the New York Times article). Here, conductor Laura Jackson provides her own response to the edited scores and considers how the newly reintroduced material fared in performance. 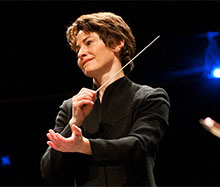 Q: Now that the concert is over–and was a huge success–what material did you find you were most excited to reintroduce to the repertoire?

When I started this project, I thought that the new critical editions would pique the interest of potential ticket buyers because we would be performing Gershwin in some sort of “authentic” or fresh way. But I thought the reality would be that the changes in the edition would be minimal and that the average listener wouldn’t hear anything different. However, as soon as Mark and Ryan started sending me drafts it became clear that audiences would hear many differences! There were audible changes–a missing timpani roll at a climactic moment, cymbal crashes on different beats than we typically hear, articulation and balance changes, instrumentation changes, etc.

In the case of Rhapsody in Blue, even the length of the piece is different because this edition restores some forty bars of piano solo from George’s sketches. To a listener who is familiar with Rhapsody as typically heard, it sounds as though the pianist suddenly takes off on an improvisational tangent. It’s a bit jarring because these passages contain more dissonance and some modernistic touches with which George was experimenting at the time. Perhaps he cut them later because he thought they were a bit too adventurous, but I like them a lot.

One of the most significant changes in both An American in Paris and Rhapsody are the restored saxophone parts. They are fantastic—much more varied in color. The editions we typically use for both pieces reduce the saxophone parts to three players, each playing one instrument throughout. In the critical edition, the three players are switching instruments constantly. An American in Paris uses 3 players and 8 saxophones. Rhapsody uses 3 players with 5 saxophones. In Paris, there is a fabulous moment with three soprano saxophones wailing away with their bells in the air! Nothing beats that. In Rhapsody there is a priceless duet between sopranino and baritone saxes. It’s a unique sound for sure.

The other remarkable thing about the new edition of An American in Paris are the taxi horns. In every performance I’ve ever heard of this piece, the taxi horns are pitched like the first half of an A-minor scale. When you look at the score, each letter A, B, C, and D is circled, not written as a note head on a staff. And yet the taxi horn notations have been interpreted for years as indicating pitches rather than “horn A” as in “horn #1.” I’ve certainly never questioned it. But Mark asserts that these are not the pitches Gershwin wanted, citing accounts from George’s friends about him searching for specific pitches with great care, and also the fact that the 1929 recording was made shortly after the work’s premiere. The sound of these alternate horns is bizarre and wonderful! I laughed when I heard them the first time, but now I love them. The randomness more closely captures the sound of actual street noise.

Q: We tend to focus on what’s missing from the current score and what a critical edition can reintroduce to a piece of music, but this idea that the process also removes some things that we assume are part of the piece is important.

Yes, and that’s what excites me about getting at Gershwin’s original. It’s amazing how much Frank Campbell-Watson (an arranger of Gershwin’s orchestral works) added to An American in Paris; he was trying to make it better. That edition should continue to be played, because it’s a wonderful edition and he strengthens certain lines by changing the orchestration and he does help the piece with certain details in my opinion. The omission Gershwin’s original score and in the new edition that completely shocked me was when I couldn’t find the climactic timpani roll right near the end. It’s such an important moment and I just couldn’t believe that George didn’t actually write it that way.  I was terribly disappointed at first, but now I don’t miss it at all. It’s not necessary. Silence can be incredibly electric at a moment like that.

The precipitous way in which George died left a lot of question marks about how he really wanted things to be performed. And it has only been in the last twenty years or so that people have started to treat Gershwin’s music and Gershwin as a composer with the same level of respect as other canonical composers. It’s a worthwhile question to ask—what did Gershwin really want, and what exactly did he himself write on the page—so that over time we don’t stray further and further away from that. Even though we might continue to enjoy Campbell-Watson’s big timpani roll or his re-orchestration of the woodwind parts, it’s good to simply know that those aren’t Gershwin’s. I definitely feel as though I understand George better, having puzzled over these manuscripts myself in some cases, and by becoming more aware of what is his and what is the work of someone else.

As a conductor, I always have to remind myself that it is important to be conscious of the interpretive decisions I make—to be conscious about when I am stepping away from what the composer originally wrote and intended and when I am sticking to it. I find that this kind of intentional, careful decision making is crucial. Sometimes I will decide to do something that a composer did not write, but I have to stand by my own decisions and not credit them to the creator.

Q: How did this Gershwin performance fit into the Reno Philharmonic’s season?

This particular season had two peaks to it, although all the concerts have been enormously successful. I started with Respighi’s Pines of Rome, and I just finished Beethoven’s Eroica. I try to make each concert a unique event. However, we did a lot of ramping up toward the Gershwin concert, because we brought the community of Reno something that nobody else in the world is getting right now. Nobody has heard these pieces played exactly this way since 1924 in the case of Rhapsody, and at least the late ’30s for Paris.

By doing these test performances, we’re helping to work out the bugs in the scores and parts. We feel like we’re contributing to a larger mission, which makes us feel proud. The musicians were especially excited to participate.

Next we’re doing Stravinsky’s Firebird and then we end the year with Carmina Burana, so it’s a really exciting season. But there’s no question that the Gershwin concert was one of the most special performances this year…and I will add that we sold out both performances!

Q: How do you see this project ultimately tying into your larger goals and work as an artist and conductor?

I love to commission today’s composers, because their mission is to give voice to all the sounds around them. We live in a global musical world. Because of travel and the internet—we can hear and explore anything. The composers that I love to work with are composers who are drawing from these different traditions, and they’re pulling world music influences into classical music, and redefining what happens on a classical music stage. If you look at what Gershwin was doing in New York in the early 1920s, it was exactly the same mission. When I think about that first performance of Rhapsody in Blue at Paul Whiteman’s An Experiment in Modern Music extravaganza—that’s the same kind of reconceiving of musical possibility that I love to do. This kind of experimentation excites listeners and shows so clearly that classical music is alive and well today. With the new Gershwin Critical Editions framed as a unique concert experience, we have the same mission turned on its head. We hear something we think we know already, but it turns out we are just discovering this music again….

Thank you, Maestro Jackson, for contributing to our mission by studying our test drafts so carefully and producing such a lovely performance. We couldn’t have done it without you!

Anne Heminger is a Ph.D. Candidate in Historical Musicology at the University of Michigan with research interests include print culture, liturgy and ritual, sound studies, and religious conversion, with a more specific focus on how musical practices shaped and reflected religious belief in the sixteenth century. Her dissertation examines music, sound, and religious identity in London from c. 1540–1560.

Our critical edition of Rhapsody in Blue (1924 Jazz Band version) is led by Dr. Ryan Bañagale, while our editor-in-chief Dr. Mark Clague is leading the edition of An American in Paris.