Why a Gershwin Critical Edition?

As the newly appointed editor-in-chief of the George and Ira Gershwin Critical Edition, I can’t believe my good fortune — to lead the team of scholars charged with the task of restoring and clarifying our understanding of the oeuvre of the Gershwin Brothers. It’s a privilege and honor to take on this responsibility and to contribute my passion for music and research to the task of making the works of George and Ira Gershwin available in full scholarly editions and for the first time.

Most surprising to many, however, may be that this work needs to be done at all.

That George died tragically from a brain tumor at the young age of 38 (on July 11, 1937) is certainly the main reason why this work still remains—86 years later—to be done. Throughout his too short life, George (as well as Ira) were focused on creating new work, not in making sure that earlier works were being corrected or even published. The Concerto in F, for example, was published only in a two-piano score in Gershwin’s lifetime, appearing in full score only in 1942.  After George’s death, Ira himself oversaw the collecting of George’s personal papers, so we have access to a treasure trove of documents to aid our research, but Ira was not a musician and he did not direct any reconsideration of the music as a whole. Finally, the Gershwin brothers’ work has been divided historically among a number of shifting publisher agreements and no one publisher or institution has taken hold of their entire corpus to produce a single authoritative series of scores. As a result, the musical works of the Gershwins too often circulate in substandard editions, even photocopies, that are riddled with errors and in some cases are missing parts of the notation! The new George and Ira Gershwin Critical Edition will correct these problems. That said, we will also respect changes the composer and lyricist made to their works and we will produce multiple versions of some works to celebrate the many ways in which their music reached audiences. Rhapsody in Blue, for example, will be published in its original 1924 jazz band arrangement by Ferde Grofé, in the orchestral arrangement, and as two-piano duo. We may even find another version or two to include! 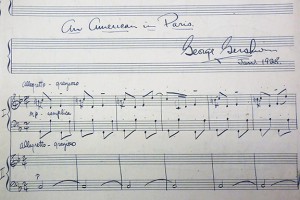 Detail from the duo piano version of An American in Paris

So what is a critical edition anyway and why will it be vital to our understanding of Gershwin works?

A critical edition is a special type of publication in which the most rigorous standards of research and editing are brought to bear on the presentation of creative work. Critical editions exist for the plays of Shakespeare, for the symphonies of Beethoven, the poetry of e. e. cummings. Two things characterize a critical edition. First, the edition describes its sources in detail and typically identifies a single “primary source” as the fundamental basis of the edition. This means that the reader (or the musician in this case) knows precisely what is being represented on the page. Secondly, a critical edition contains an appendix in which the editorial principles governing the transcription of the source into the newly typeset edition are explained. Further, any change the editor makes in translating the source — say correcting a mistake or realizing an abbreviation — is described in a note. So, the user of the edition knows exactly what on the page is from the author(s) and what is an interpretation of the editor.

One question our edition will answer, I believe, is what precisely did George Gershwin write and when. The dramatic story of the rushed creative process for Rhapsody in Blue (as well as a cultural bias against popular music) has led some to believe that George Gershwin did not orchestrate his own works. In fact, George did all his own orchestrations from Concerto in F onwards, but our edition will lend specificity and detail to our answers for these and other questions about the Gershwin brothers working methods and cultural contributions.

For me, the works of George and Ira are prophetic in their creative approach to American art in the twentieth century and beyond. They led the way by finding inspiration in novel combinations of styles and by breaking down social barriers to find new artistic possibilities.