William Lucas has been a member of the Detroit Symphony Orchestra trumpet section since May 1988. Through the years he has performed as a freelance musician in the Detroit/Ann Arbor areas and has served as the associate principal trumpet of the Toledo Symphony prior to his appointment in Detroit.

An active member of the freelance, jazz, and chamber music communities in metropolitan Detroit, Lucas has appeared as a jazz soloist in many popular jazz clubs and nightspots in Vail, Colorado as well as the Montreux, Detroit and Montreux, Switzerland Jazz Festivals. A prolific arranger for small ensembles, he is frequently called upon to compose trumpet fanfares for local commemorations. Lucas’s arrangements for brass have been performed by the symphony orchestras of Phoenix and Detroit, and his arrangements for string instruments have been performed by the Celli Jam, an ensemble comprising members the Detroit Symphony Orchestra cello section. He has been featured as the author of several trumpet pedagogy articles in the International Trumpet Guild’s ITG Journal, including his systematic approach to the preparation of orchestral auditioning. Prior to joining the U-M faculty, Lucas served for three years on the faculty of the Oberlin Conservatory of Music. 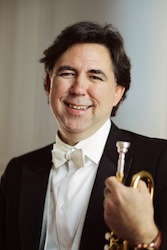