Clarinetist William King maintains an active and varied career in music. He is the coordinator of woodwind chamber music at the University of Michigan and holds the 2nd/bass clarinet chair (tenured) with the Michigan Opera Theatre Orchestra. He is a member of the River Raisin Ragtime Revue, an ensemble dedicated to performing the music of America’s first popular repertoire, and he performs every August at the Michigan City (IN) Chamber Music Festival.

King has held tenured positions in the Pittsburgh Ballet Theatre Orchestra, where he played principal clarinet for four seasons, the Illinois Symphony, and Sinfonia da Camera, and has performed in many of the local orchestras throughout southeast Michigan, northwest Ohio, and western Ontario. 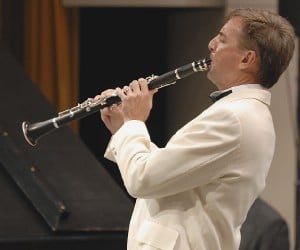