Distinguished American tenor Stanford Olsen joined the faculty of the University of Michigan School of Music, Theater & Dance as professor of voice after 15 years as artist-in-residence and holder of the Shelfer Eminent Scholar in Music chair at Florida State University. One of this generation’s most successful and versatile artists, his career spans more than 1,200 performances on five continents over the course of 30 years.

Since his professional operatic debut there in 1986, opposite Dame Joan Sutherland in Bellini’s I Puritani, Stanford Olsen has performed more than 160 times with New York’s Metropolitan Opera. Acclaimed for his performances of the leading tenor roles in the operas of Mozart, Rossini, Donizetti, and Bellini, Olsen enjoys an international reputation as a Mozartean of style and elegance, cited by The New York Times in 1990 in an article titled “A Golden Age of Mozart Tenors.” Highly regarded for his interpretations of the bel canto roles of Nemorino, Almaviva, and Arturo, Olsen has been heard in this repertoire throughout the world at venues such as San Francisco Opera, Houston Grand Opera, Miami Opera, La Scala di Milano, Landestheater Stuttgart, Theatre du Chatelet, Teatro Bellini di Catania, Theatre La Monnaie, Australian Opera, Deutsche Oper Berlin, Nederlandse Oper, Tokyo Opera City, and most other significant opera companies in the USA and Europe. His recording of the fiendishly difficult role of Argirio in Rossini’s Tancredi  (Naxos/Alberto Zedda) netted a GRAMMY nomination.

One of this country’s most successful recitalists, Olsen was declared First Place Winner of the 1989 Walter W. Naumburg Award for recitalists, the only tenor to do so in nearly 60 years. His New York recital debut was in Alice Tully Hall in 1989, singing Schubert’s Die Schöne Müllerin, a piece he repeated in 1997 in the concluding season of the 92nd Street Y’s 10-year “Schubertiade” project, this time accompanied by Maestro James Levine. His European recital debut at Paris’ Theatre du Chatelet in 1993 was quickly followed by engagements at Brussels’ La Monnaie and Italy’s Maggio Musicale di Firenze. He continues to be a sought-after recitalist in the USA and Europe, particularly singing the repertoire of Schubert, Wolf, and Britten.

Olsen graduated with the bachelor of music degree in vocal performance from the University of Utah, where he studied voice with Naomi Farr. He was an opera fellow at the Aspen Music Festival where he studied voice with Thomas Paul and Lieder with Brookes Smith. He received the artist diploma in opera from the University of Cincinnati’s College-Conservatory of Music, studying opera with Italo Tajo and John Alexander, as well as Lieder with Kenneth Griffiths.

In addition to the Naumburg Award, Olsen won the Metropolitan Opera National Council Auditions in 1986, was a Richard Tucker Foundation Career Grant winner in 1989, and also has received awards from Opera America and Opera Index. He is a four-time GRAMMY nominee, and winner of an Emmy for the PBS broadcast of Sondheim’s Sweeney Todd with the New York Philharmonic, featuring George Hearn and Patti Lupone. Winner of the University of Cincinnati’s College-Conservatory of Music’s “Alumnus of the Year” award in 1989, Olsen also received the first ever “Alumnus of the Year” award from the University of Utah College of Fine Arts in 2010.

A sought-after clinician and adjudicator, Stanford Olsen has been a frequent judge for the Metropolitan Opera’s National Council Auditions. He has given masterclasses to students at most of the country’s significant universities and conservatories, including CCM, Curtis, Eastman, Oberlin, Manhattan School of Music, Rice University, University of Illinois, University of Houston, USC, and dozens of others. He has also worked with the apprentices at the Tanglewood Festival, Opera Theater of St. Louis, Santa Fe Opera, Ravinia Festival, Cleveland Art Song Institute, the Aspen Music Festival, the Utah Opera, and the Metropolitan’s Lindemann Young Artist Program.

Olsen’s students are frequent participants in the highly competitive apprentice programs at Central City, St. Louis, Santa Fe, Wolftrap, and Merola. His students include GRAMMY and Emmy award winners; Metropolitan Opera, George London Foundation, Marilyn Horne Foundation, and Richard Tucker foundation grant winners; and artists regularly heard at such venues as the Met, San Francisco Opera, Chicago Lyric Opera, Covent Garden, Frankfurt Opera, Nederlandse Oper, and others throughout Europe and the U.S.  In addition to his duties at the University of Michigan, Olsen spends his summers as a principal vocal instructor at the prestigious Castleton Festival, under the direction of Loren Maazel. 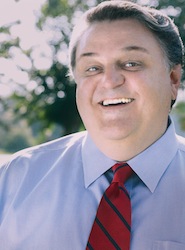