Margo Halsted, MA (music and education), former university carillonist and associate professor of campanology, had been at U-M since 1987. During her tenure at U-M, she performed regularly on the two University carillons, the Charles Baird Carillon in Burton Memorial Tower (55 English bells, bourdon of 12 tons, dating from 1936 and 1975) and the Lurie Carillon in the Ann and Robert H. Lurie Tower (60 Dutch bells, bourdon of 6 tons, dating from 1996). Ms. Halsted has been active as a recitalist, teacher, speaker, jurist, musicologist, and consultant, and has performed in all countries with an active carillon tradition. She has been a featured recitalist or speaker for five World Carillon Federation meetings. The U-M has the only carillon master’s degree program in the United States, and 27 of Halsted’s students have passed the examination to become full members of the Guild of Carillonneurs in North America. Particularly interested in historic carillon music, Ms. Halsted has published articles and a book on 18th- and 19th-century carillon manuscripts from Belgium. In addition to her degrees from Stanford University and the University of California – Riverside, she holds a diploma from the Netherlands Carillon School. She was presented with the University of California – Berkeley Medal for her contributions to the carillon art. 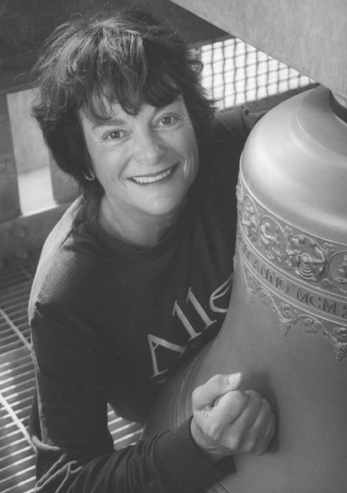