Lorna Haywood (soprano) made her American debut as soloist with Robert Shaw. She has sung with most of America’s major symphony orchestras, including Boston, Cleveland, Chicago, San Francisco, National, Minnesota, Atlanta, Cincinnati and Pittsburgh. Summer festival appearances include Blossom, Meadowbrook, Aspen, Tanglewood, Grant Park, Cincinnati, Glyndebourne, Aldeburgh, Edinburgh, and London’s Promenade Concerts in the Royal Albert Hall. She sang with the Handel Society in Washington, D.C., the Music of the Baroque in Chicago, and was soprano soloist with the Bach Aria Group for two years. In this country her opera appearances include those with the Chicago Lyric, the Boston Concert, the San Francisco, the Dallas Civic, the Baltimore Lyric, and the Pacific Northwest Festival in Seattle, and the companies of New Orleans, Washington, D.C., San Diego, Forth Worth, Columbus, Toledo, Atlanta and Honolulu. In Europe she has sung frequently at the Royal Opera House, Covent Garden, the English National Opera, the Welsh National Opera, and the Scottish Opera. Regarded as a leading interpreter of the operas of Leos Janacek, she has sung this repertory in London, New York, San Francisco, Johannesburg and Prague. Her orchestral and concert appearances include those with the Royal Philharmonic, the London Philharmonic, the Hallé Orchestra, the Royal Liverpool Philharmonic, and the City of Birmingham Symphony Orchestra. Recordings she has made include Wagner’s “Die Feen” with the B.B.C. Symphony Orchestra; Mozart’s “Requiem” with Amor Artis, conducted by Johannes Somary (Vox Classics); Paul Paray’s mass with the Royal Scottish National Symphony Orchestra and Chorus (Reference Records); the GRAMMY-Award-winning performance of Benjamin Britten’s War Requiem with Robert Shaw and the Atlanta Symphony; and Menotti’s opera Amahl and the Night Visitors with the Royal Opera Covent Garden Orchestra and Chorus. 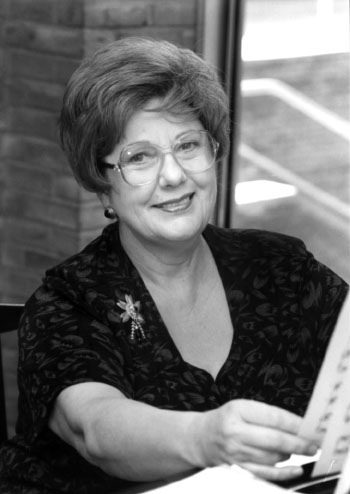