When she is not writing or teaching you can often find Kristin fiercely advocating for the marginalized and underrepresented groups of composers in our classical music culture, hanging out with her son with special needs, or on her deck with locally-brewed Sweetwaters and/or Comet coffee. Kristin loves camping, hiking, kayaking, and riding her mountain bike around town. Based in Ann Arbor, she is a professor and the chair of composition at the University of Michigan School of Music, Theatre & Dance.

Upcoming premieres include: Dune Acres with the Detroit Symphony Orchestra in February 2019; and When There Are Nine with mezzo-soprano Jamie Barton, Roomful of Teeth, and the Cabrillo Festival of Contemporary Music Orchestra, featuring poetry by Megan Levad, about the life of Associate Justice of the Supreme Court Ruth Bader Ginsburg, in August 2019.

Kristin recently received an OPERA America Discovery Grant for female composers, made possible through The Virginia B. Toulmin Foundation. The grant supported Kristin’s work Kept: a ghost story, a 75-minute chamber opera drawn from the haunting of northern Michigan’s Old Presque Isle Lighthouse. Featuring a libretto by poet Megan Levad, Kept was premiered at the Virginia Arts Festival with support from the John Duffy Institute for New Opera in May 2017.

Born in 1973, Kristin grew up in Boulder, Colorado. She often misses the daily-gazing at the Front Range of the Rocky Mountains of her youth; yet she loves that Ann Arbor is blanketed in deciduous trees. 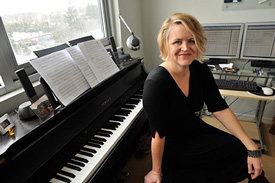