Dr. Eva Jessye: The Grand Dame of Porgy and Bess

Dr. Eva Jessye’s work in the premiere production and subsequent revivals of The Gershwins’ Porgy and Bess helped launch her choir to worldwide fame, and contributed to Jessye’s enduring legacy as “The Grande Dame of Black Music.” This is Part 2 of a 3-part series on Dr. Eva Jessye. In part 1, we explored Jessye’s early life and her achievements as a choral director and composer. Our next and final installment will discuss Jessye’s career in academia and the Eva Jessye Collection here at the University of Michigan.

“I saw this notice in the Film Daily looking for a black choir, and so we all went up and we auditioned. People from the Theatre Guild were there, I remember. We did the shout ‘Plenty Good Room’ and danced all over the stage. George Gershwin jumped up and shouted: ‘That’s it! That’s what I want!’” – Eva Jessye

By the mid-1930s, many music lovers had come to know the Eva Jessye Choir under the direction of Dr. Jessye. Founded in Baltimore in 1926, the choir had a reputation of powerful presentations of traditional Black spirituals. They made a name for themselves first in Hollywood film—the choir appeared in King Vidor’s 1929 film Hallelujah—before getting into radio broadcasts in the 1930s (check out this post to learn more about Gershwin’s own radio career). Sought out by directors and composers all across the country, the Eva Jessye Choir was soon invited to perform on Broadway in Virgil Thompson and Gertrude Stein’s 1934 opera Four Saints in Three Acts. When it came time for the Gershwins and Heywards to cast their 1935 opera Porgy and Bess, they too aimed to select nothing short of the best Black singers the music industry had to offer. A scrutinous search began for their ideal company—a cast of seventy that would be the largest group of Black singers any American stage had ever featured.

The Eva Jessye Choir was fresh off of a tour in South Carolina when Jessye received an invitation to audition for Gershwin’s new opera. Despite having little time to prepare for the audition, the Eva Jessye Choir made a powerful impression on Gershwin. Indeed, when Jessye auditioned her all-Black choir in February of 1935, it was as if Gershwin’s vision for the ensemble had materialized before his own eyes. According to the choir director, “Gershwin jumped up and shouted: ‘That’s it! That’s what I want!’” The collaboration between Jessye and Gershwin officially began on March 19th, 1935; Jessye assumed the role of Choral Director and her sixteen-voice choir became the musical backbone of Porgy and Bess. Jessye herself even sang the role of the Strawberry Woman in an early preview of the opera. Most significantly, she was the only Black member of the original production team.

Rehearsals began in July 1935, and the cast was onstage by the end of August, working with conductor Alexander Smallens. Jessye later reflected on the hectic yet hyper-focused atmosphere of the rehearsals. “George didn’t interfere,” she said. Reflecting on his confidence in the cast, Jessye explained that, “he let us do what we knew how to do.” Porgy and Bess finally made its Broadway debut on October 10th, 1935 at the Alvin Theatre, after months of growing anticipation. Although the reception of the opera in the Black press was mixed, critics praised the choir’s vibrant performance. Jessye herself held great respect for the work, calling it “a splendid thing for the Negro… [Gershwin] had written in things that sounded just right, like our people.” 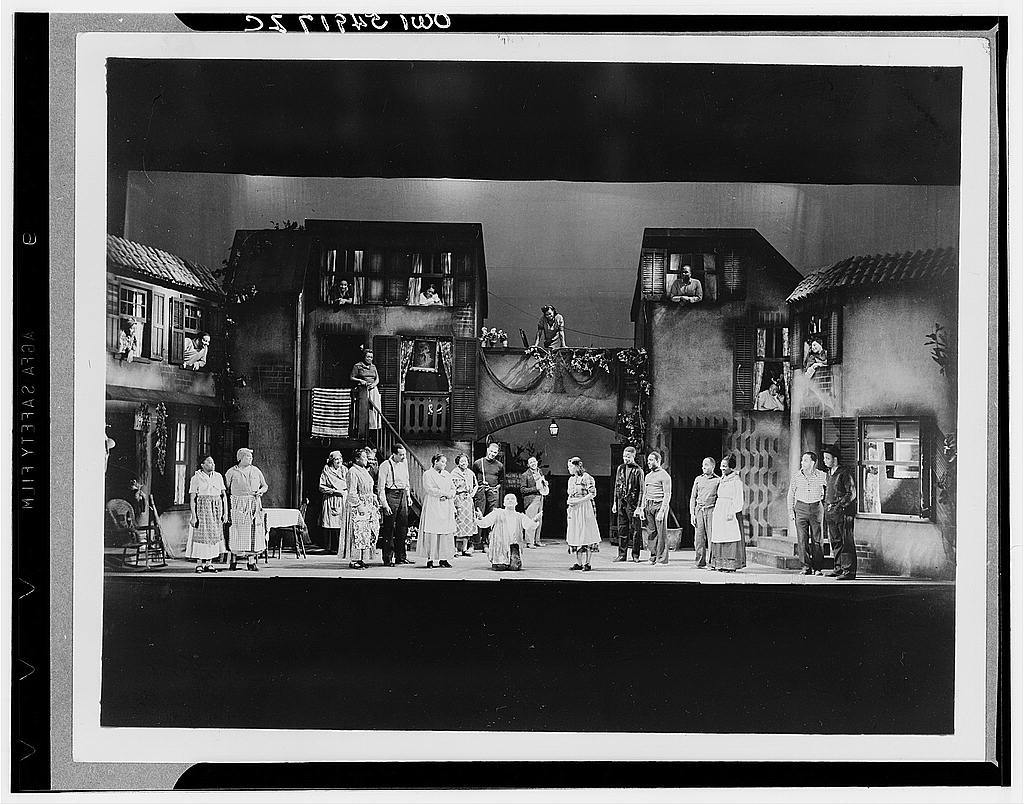 The Eva Jessye Choir in a scene from the 1942 production of Porgy and Bess, directed by Cheryl Crawford

The 126 performances that followed the Broadway premiere of Porgy and Bess saw meager financial success, though enthusiastic audiences invited cast members back onstage for numerous curtain calls at the end of every show. The Eva Jessye Choir went on to perform in the first revival of 1938, but the turning point for the opera came in 1941 with Tony-award-winning director Cheryl Crawford’s revival. Crawford shortened the opera significantly, in part by converting some of the work’s long, sung recitatives into spoken word—much to the chagrin of Ira Gershwin, who called it a “cut-rate” version. Many members of the original cast and crew were rehired, including Jessye and her choir. The revival reopened in New York on January 22nd, 1942 to glowing reviews. New York Times critic Brooks Atkinson held that this version was a considerable improvement to the “overwrought score” that many found simply too long to sit through. Jessye admired Crawford’s version, despite Ira Gershwin’s dismissal. In a 1951 interview, she affirmed that “She [Crawford] was faithful and respectful to the score… It was a good production.” Ultimately the revival’s box office success—markedly larger than the 1935 production—emboldened other producers to take on Porgy and Bess.

Robert Breen and Blevins Davis mounted a 1952 revival. Although it featured almost an entirely new cast, the Eva Jessye Choir, now a hallmark of any production of the Gershwins’ and Heywards’ opera, was asked to perform in this revival as well. The Breen-Davis production toured the world during the early Cold War, performing across Europe, the Americas, the Middle East, and Africa. They were famously the first American theater group to perform in Russia since the 1917 Bolshevik Revolution, which paved the way for later cultural exchanges with the USSR. This revival was also performed for President Harry S Truman, a childhood friend of Davis whose administration offered early support for the touring production.

The Eva Jessye Choir perform selections from Porgy and Bess, rec. May 15, 1940 on the Decca label.

A European tour with the Breen-Davis production afforded Jessye and her choir some of the most memorable moments of their careers. In the wake of World War II, post-Nazi Germany saw a renewed interest in American music (specifically this opera, which was sung by Black performers and written by White and Jewish authors) previously banned or denounced by the Nazis. The Eva Jessye Choir also performed their own concerts while abroad with the Porgy and Bess cast, including a concert given for an audience of refugees from Eastern Europe. The venue was the haunting Kaiser Wilhelm Memorial Church in Berlin, which had been bombed in April of 1945 and remains a war memorial. The international success of both Breen-Davis’s Porgy and Bess and the choir’s concerts launched the Eva Jessye Choir to cultural prestige in the US. When the company returned home in 1953, it gave more than 300 performances in New York City over the course of eight months.

Despite making history as the first Black woman to achieve global recognition as a conductor, the Breen-Davis production’s newly-hired director, Ella Gerber, decided the 58-year-old Jessye had aged past “usefulness” by 1954. She was let go, though her choir was still contractually obligated to appear in the show. After the Eva Jessye Choir encountered artistic issues with Gerber, in addition to alleging considerable mistreatment of the cast, Dr. Jessye was asked to return as Choral Director. She agreed, and the company embarked on another European and Middle Eastern tour in September of 1954.

In the decades she spent rehearsing and performing Porgy and Bess, Jessye became known as the unofficial “Guardian of the Score.” She was often the sole Black voice on the production team of various revivals, and her choir was the only group that George Gershwin ever heard perform in his opera. The Eva Jessye Choir was a glorious amalgamation of voices, all rooted in Black musical traditions, led by the Grand Dame of Black Music. Jessye’s immeasurable contributions to Porgy and Bess brought the opera to stages worldwide, and her choir’s legacy continues to live on in productions of the most frequently performed American opera. In the next and final installment of our series on Dr. Eva Jessye, we will join blog team member Sophia Janevic as she spends a day in Jessye’s archive, currently housed at the University of Michigan’s Bentley Historical Library.

Black, Donald Fisher. “The Life and Work of Eva Jessye and Her Contributions to American Music.” Ph.D. Diss., University of Michigan, 1986.